The Nine Hells are no place for the mortal soul. Those who willingly walk into the most infamous dens of iniquity and horror are sure to return home with stories, treasures, and... more
Post Reply
79 posts

Ryld stops and gawks into the locket, oblivious to the words of his companions. He puts the locket in his pocket and stoops to rifle through the corpse's clothing, and fondles the war machine as well. Whatever he finds, if anything, he sets his sights on the pillar above them, hoping to learn more about the locket up there.

Once up at the top of the ridge, he clasps the rapier by the hilt with both hands behind his back to hide his weapon from the madwoman's view. Yes - she is clearly mad...

He whispers, "How do you want to handle this?"

Lol good fail or bad fail... I'll let you know what I come up with.
Top

Tome unsheaths a dagger at his side and hands it to Ryld to coat, then carefully places it away.

He points at the tower, "We should head to the tower distant on the horizon first."

*** At the machine ***
"Quite interesting." he scribes in his book for a time running his hands over the machine before they leave.

*** Now ***
"A demonic ritual, and a cult member doubtless." He places his hand on a slender wand tucked into his belt. "We should approach with caution, so we do not become distracted by this matter." He points with a metal hand, "Perhaps we should go around."

During the trip Tome has mentioned he is a arcanist, his power lays in the casting of spells, the study of magic, and the experimentation of said magic on the body of living creatures.
"He that breaks a thing to find out what it is has left the path of wisdom." - Gandalf
J.R.R. Tolkien, Council of Elrond, The Fellowship of the Ring
Top

"Caution is wise, my new friend. We approach carefully, lest we bring down unnecessary danger upon our own heads. After all, we have a mission to fulfill and distractions are a nuisance." He halts a moment at the feelings coming from the soul coin. He reaches into his pouch and palms the spirit of the orc shaman, trying to get a clearer understanding of what he is sensing.
Rule Number 12: "A soft answer turneth away wrath. Once wrath is looking the other way, shoot it in the head."
Top

"I think we should go around," Morneth offers with a shrug. "A slight delay in travel may prove wiser in the long run."
Top

Atop the hill, Tome's docent immediately sends a thought to inspect the eight stones surrounding the obelisk. From a distance, it's clear the stones are marked with glowing runes. Each rune emits a powerful magic aura of a particular school of magic. Each of the rune symbols represent a different school of magic--abjuration, conjuration, divination, enchantment, evocation, illusion, necromancy, and transmutation--matching that of its aura. The warforged also realizes that the obelisk is somehow channeling arcane magics from the stones.

As they stare at the woman and make their plans, she rushes from stone to stone touching them in a seemingly random sequence. Then (what appears to be) magic missiles are released from the obelisk knocking her to the ground. Cursing again, she pounds the earth and kicks at the foundation of the obelisk. Raising a hand with an obscene gesture along with curses, she sits staring up at the structure. 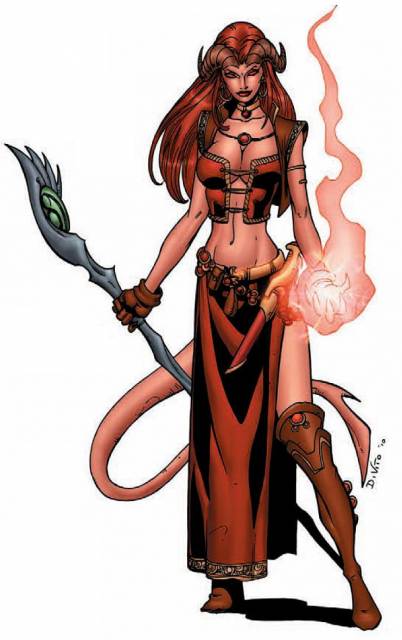 Ok, map has 7 stones, there's actually 8 surrounding the center obelisk. I couldn't find a better map, so lets go with it 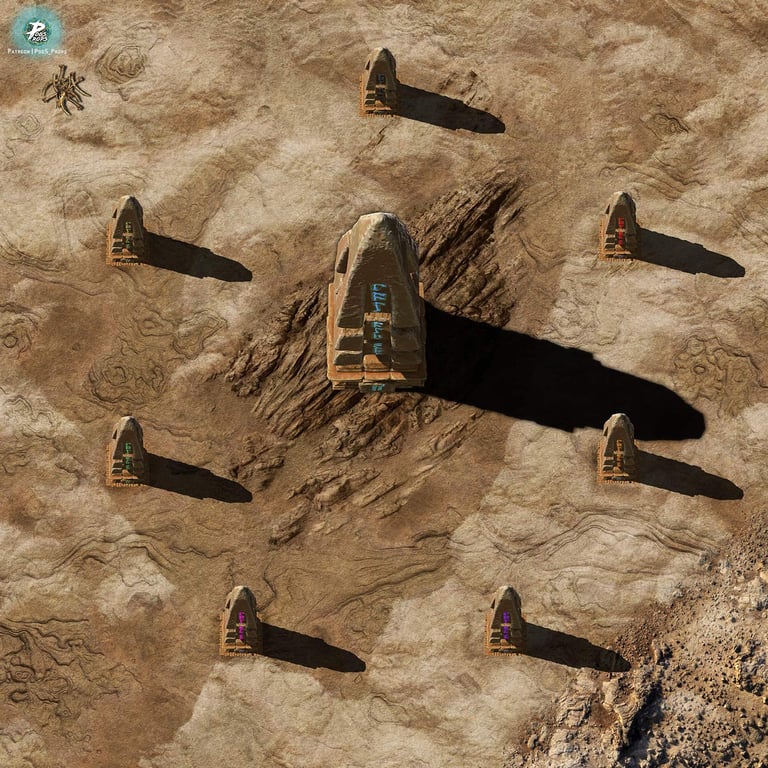 Ryld stifles a chuckle. "Looks like she's having trouble. Why don't we offer our help? She might have the same goal. Hell, she might even be that Jezirpa we were told to look out for. But of course she might not be." He gives his weapon a tap on the hilt.
Top

"Fine, but don't say I didn't warn you when she tries to rip your face off."
Top

After some moments Tome speaks again.

"Curious. Each menhir is radiating a magic from a different sphere of power. The center monolith is channeling the magic. I believe I must study this collection of aggregate of mineral matter. I retract my previous statement to avoid it." Then he starts down the ridge walking toward the women with the others.
"He that breaks a thing to find out what it is has left the path of wisdom." - Gandalf
J.R.R. Tolkien, Council of Elrond, The Fellowship of the Ring
Top

The paladin checks to make sure his full regalia is revealed and clear. He brushes off some dust and dirt from his shield, and digs out the more stubborn spots. As they approach, he hails her at a reasonable distance. Everyone down here is paranoid, as it should be. Trust is a commodity earned, not given to strangers met in the wilderness. "Greetings, mistress. How fares your research?"
Rule Number 12: "A soft answer turneth away wrath. Once wrath is looking the other way, shoot it in the head."
Top

The woman jumps up from her spot surprised at Log'thar's voice. She quickly takes an offensive spell casting position for a moment and then lowers her head and arms with a long sigh. Muttering to herself, "If you're going to kill me, just do it. My spells cannot leave the ring and this stone prevents me from taking my own life."

She takes a moment to look at the group and then notices the paladin's shield. Looking a bit surprised, she raises an eyebrow. Talking directly to the orc, she asks "Did Tubidu finally send someone to help me?"

"I've been here trapped here for years... or decades ... or ... I don't even... " She trails off a bit, clearly confused by hell's lack of a day/night cycle. The hellscape constantly appears as if it is dusk.

Holding out her hand to warn the others, she says. "Do not enter the ring. I felt the arcane power from the stones and ventured into the trap. The others sought to free me, but they never returned. I thought they'd abandoned me."

"I have tried to unlock its secrets. And I have failed countless times to decipher any pattern or solution to this puzzle. There are too many permutations of the runes and my spells are useless against its barriers. It is impossible without the solution. I was a fool. The temptation was too great."
Top
Post Reply
79 posts