This is the OOC forum for The Dark Museum.
Post Reply
4 posts • Page 1 of 1

The Nine Hells of Baator
The Nine Hells has nine layers. The first eight are each ruled by archdevils that answer to Asmodeus, the Archduke of Nessus, the ninth layer. To reach the deepest layer of the Nine Hells, one must descend through all eight of the layers above it, in order.

Avernus. No planar portals connect directly to the lower layers of the Nine Hells, by Asmodeus’s orders. As such, the first layer of Avernus is the arrival point for visitors to the plane. Avernus is a rocky wasteland with rivers of blood and clouds of biting flies. Fiery comets occasionally fall from the darkened sky and leave fuming impact craters behind. Empty battlefields are littered with weapons and bones, showing where the legions of the Nine Hells met enemies on their native soil and prevailed.

Dis. Dis, the second layer of the Nine Hells, is a labyrinth of canyons wedged between sheer mountains rich with iron ore. Iron roads span and wend through the canyons, watched over by the garrisons of iron fortresses perched atop jagged pinnacles.

Minauros. The third layer of the Nine Hells is a stench-ridden bog. Acidic rain spills from the layer’s brown skies, thick layers of scum cover its putrid surface, and yawning pits lie in wait beneath the murk to engulf careless wanderers. Cyclopean cities of ornately carved stone rise up from the bog, including the great city of Minauros for which the layer is named.

Phlegethos. Phlegethos, the fourth layer, is a fiery landscape whose seas of molten magma brew hurricanes of hot wind, choking smoke, and pyroclastic ash. Within the fire-filled caldera of Phlegethos’s largest volcano rises Abriymoch, a fortress city cast of obsidian and dark glass. With rivers of molten lava pouring down its outer walls, the city resembles the sculpted centerpiece of a gigantic, hellish fountain.

Stygia. The fifth layer of the Nine Hells is a freezing realm of ice within which cold flames burn. A frozen sea surrounds the layer, and its gloomy sky crackles with lightning.

Malbolge. Malbolge, the sixth layer, has outlasted many rulers, among them Malagard the Hag Countess and the archdevil Moloch. Malbolge is a seemingly endless slope, like the sides of an impossibly huge mountain. Parts of the layer break off from time to time, creating deadly and deafening avalanches of stone. The inhabitants of Malbolge live in crumbling fortresses and great caves carved into the mountainside.

Cania. Cania, the eighth layer of the Nine Hells, is an icy hellscape, whose ice storms can tear flesh from bone. Cities embedded in the ice provide shelter for guests and prisoners of Cania’s ruler, the brilliant and conniving archdevil Mephistopheles.

Nessus. The lowest layer of the Nine Hells, Nessus is a realm of dark pits whose walls are set with fortresses. There, pit fiend generals loyal to Asmodeus garrison their diabolical legions and plot the conquest of the multiverse. At the center of the layer stands a vast rift of unknown depth, out of which rises the great citadel-spire of Malsheem, home to Asmodeus and his infernal court.
Going to Hell
The Nine Hells are not a place easily visited. Magic is typically extremely risky without being familiar with the destination. There are a few portals and these are few and far between, guarded and kept secret. Rarer are magic items that make transit possible. Lastly, the memory sapping waters of the River Styx provides a straightforward path to reach any layer of hell. The lowest levels are difficult to reach without the assistance of marrenoloths fiends to navigate the rivers.

The plane known as the Outlands is a neutral territory that connects to all other planes. It is home to the city Ribcage (named so for the rib like protrusions of rock that surround the city) that somehow connects to Avernus. This connection is not reliably predictable, with some travelers needing to wait weeks in Ribcage before the city finds itself in Hell.
The Outlands
The Outlands is the plane between the Outer Planes. It is the plane of neutrality, incorporating a little of everything and keeping all aspects in a paradoxical balance — simultaneously concordant and in opposition. The plane has varied terrain, with prairies, mountains, and shallow rivers.

Around the outside edge of the Outlands, evenly spaced, are the gate-towns: sixteen settlements, each built around a portal leading to one of the Outer Planes. Each town shares many of the characteristics of the plane where its gate leads. Planar emissaries often meet in these towns, so it isn’t unusual to see strange pairings, such as a celestial and a fiend arguing in a tavern while sharing a fine bottle of wine.

Ribcage
The Outlands is home to the city Ribcage (named so for the rib like protrusions of rock that surround the city) that somehow connects to first layer of the Nine Hells of Baator, called Avernus. This connection is not reliably predictable, with some travelers needing to wait weeks in Ribcage before the city finds itself in Hell.

The Dark Museum
The Dark Museum, known as the "Museum" to locals, is a new establishment that has not yet opened. It benefactors are rumored to be in the possession of artifacts, documents, and soul coins of high value. Secretly, this museum hires the bravest, or foolish, of mortals to enter the Nine Hells and retrieve items for the collection - some of which were stolen from Heaven and others that originated in the depths of Hell.

The Highway Tavern and Inn
A sign of red, yellow, and royal purple flashes with stilted movements of a spikyhaired tiefling shoving a fork of meat into his gaping mouth. Just as tall as the sign, the building behind is wreathed in dozens of colorful lanterns and soot-covered awnings, that support a massive banner that reads: “The Highway.” The tavern draws many aloof and enigmatic visitors who frequent the realm of Baator to conduct trade or sign infernal contracts.
Top

Magic in Hell
For the most part, spells continue to function as they do elsewhere. Any spells that don’t work as intended will be described as such, although these alterations might be a localized effect and not something that is enforced across the entire layer.

The exception to this rule is planar teleportation magic: beings may only teleport within the Nine Hells themselves. Teleporting from outside into hell, or teleporting to a location that is outside hell, must be done from Avernus. Likewise, you may only teleport to Avernus.

Most archdukes have the ability to sense any powerful spellcasters within their domain. Casting a spell of the 6th level or higher, in general, registers with the archduke of that layer. That’s not to suggest they act upon every single spell cast, but it is wise to know when and where particularly powerful spells are being cast and by whom.

Corruption in Hell
Extended stays within the hells are not recommended. Any time a creature who is not native to the Nine Hells completes a short or long rest, they need to roll on the corruption chart. Typically, this deals some small amount of psychic damage but more brutally can leave character with a permanent flaw.
Top

River Styx
The River Styx courses through the Lower Planes, frustrating every attempt to map it or predict its course. Getting lost while sailing the Styx isn’t the only danger the river presents. Simply tasting or touching its waters can shatter a creature’s intellect and personality, as well as strip away its memories. Certain fiends are immune to the river’s effects, but most creatures have no defense against it.


Locations are not yet marked. Will be updated as you discover named locations. 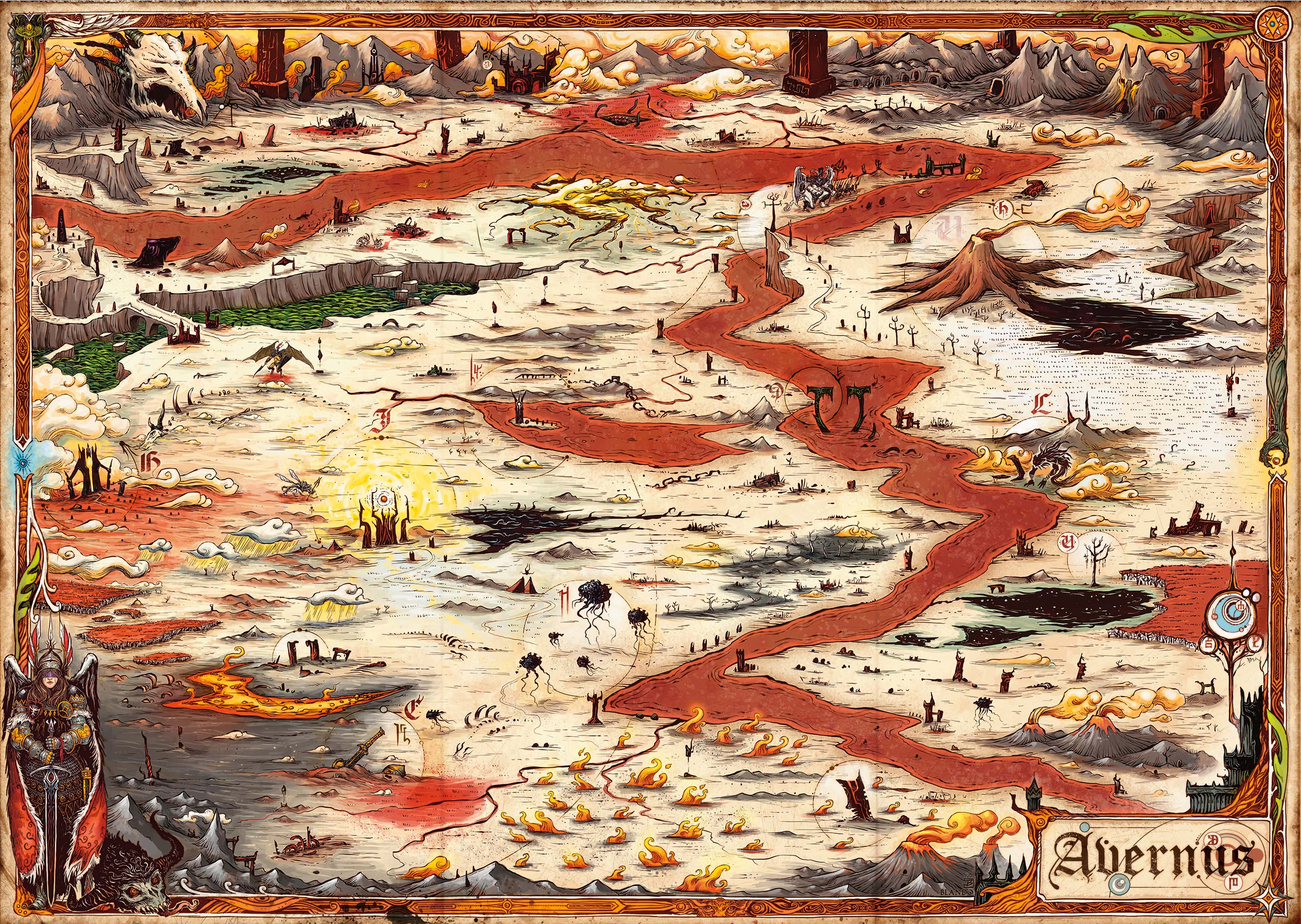 Avernus
An ashy, dust covered wasteland. Avernus is known for being the first layer of hell, the layer where Tiamat resides, as well as being ruled over by Zariel, the fallen angel.

Avernus serves as the front line of the great clash between the evil forces of chaos and law known as the Blood War. Demons from the Abyss use the River Styx to enter Avernus, where they hurl themselves against infernal legions of devils.

Avernus was not always the blasted, war-torn battlefield it is today. Long ago, it was a plane of lush gardens and bucolic beauty created by Asmodeus to tempt mortals. The intrusion of the River Styx followed by endless waves of slavering demons destroyed this paradise, leaving layer upon layer of bones, ruins, and shattered war machines. Pieces of cities stolen from other planes, tiny remnants of Avernus’s lost beauty, evidence of destroyed celestial armies, and tombs of ancient travelers all dot the Avernian wasteland.

Avernus is not a place expressly for the punishment of evil souls; instead, it represents a “next level” for evil souls after the end of their wicked lives as mortals. The Nine Hells allows souls to exist in a concentrated form, where they can work through their spiritual bondage to express their dark desires such as cruelty, covetousness, the need to control, the craving for power, and uncontrolled greed. Hell offers an eternity of fulfillment from the most insignificant desires to the seven deadly sins. Every shred of evil is used in the Nine Hells, and each layer specializes in some way to accommodate and exploit the vices and weaknesses of mortals.

Most devils in Avernus serve Zariel, though other Lords of the Nine send forces here to help repel demonic invaders. Devils who are not part of Zariel’s legions serve as emissaries from the other layers or as spies for archdevils seeking signs of weakness that they can exploit to further their dreams of power.

The map depicts a region of Avernus, a wasteland of dizzying proportions that has been warped by eons of demonic invasion. Travelers face a hellscape that disorients the senses and defies attempts to map it accurately.

Standard cartographic methods are useless, since distances in Avernus are impossible to gauge and locations sometimes shift supernaturally. As such, the map shows pictorial impressions of locations that only hint at their distances from one another. It is by no means something that can, or should, be taken literally.

No scale is marked on the map, and the placement of locations is based on the memories of an intrepid yet insane cartographer. Distances and travel times between locations cannot be determined by studying the map and can change with each journey, at your discretion. This leads to an unsettled and disorienting feeling as anyone roam the hellscape.

The map is riddled with strange imagery and unique iconography. These are the cartographer’s artistic impressions of Avernus, and their meanings, for the most part, remain a mystery.
Top

Cania (8th level of hell), like Stygia (5th level of hell) above it, is a bitterly cold realm of glaciers and howling ice storms. Mephistopheles holds court here with the ice devils that make up his retinue. Operating from his great tower, the icy citadel of Mephistar, he conducts a never-ending series of experiments that expand his understanding of arcane magic and of the planes of existence.
Top
Post Reply
4 posts • Page 1 of 1

Return to “OOC: The Dark Museum”