The DARK TIMES have begun.

After ORDER 66 decimated the
JEDI--guardians of order and justice,
the GALACTIC REPUBLIC is no more.
In its place, Emperor Palpatine
formed the GALACTIC EMPIRE and
rules through fear.

Senators opposing the GALACTIC
EMPIRE are arrested on charges
of conspiracy and treason.
Opposition voices are silenced in
the name of security and stability.

The future is grim, evil is on the
rise, and all paths seem to lead
nowhere. The fate of the Jedi
Order is sealed. Will the surviving
Jedi find a path to the future
... or to the grave?

The Living Pits of Boontu's spaceport is more active than anyone would suspect. Above the planet, Separatists and Clone Armies battle for control of the sector. Meanwhile a few kilometers away, Separatists and Clone Armies battle at the Republic's regional ordinance and resupply depot. Despite the war, spice and other illegal goods are smuggled through the port. However, most of the spaceport's activity relates to tourists and competitors for an upcoming podracing event.

After finding an available landing platform, the crew of the stolen Separatist Shuttle take a moment to catch their breath. The infamous pirate Hondo Ohnaka praises himself as he powers down the shuttle, "Another rescue by Hondo Ohnaka!"

A few moments after landing, Jedi Knight Janos Tyree receives a second message on his Jedi Beacon Transceiver. This transmission included a recall notice to ignore the previous transmission. When he activates the receiver, a hologram of Jedi Master Obi-Wan Kenobi appears.

"Hey! I wouldn't believe me either, but he is one of my best friends." Hondo interjects as his attempt to eavesdrop fails when the hologram of Obi-Wan Kenobi activates.

"This is Master Obi-Wan Kenobi. I regret to report that both
our Jedi Order and the Republic have fallen, with the dark
shadow of the Empire rising to take their place. This message
is a warning and a reminder for any surviving Jedi:

Trust in the Force.

Do not return to the Temple. That time has passed, and our
future is uncertain. We will each be challenged – our trust,
our faith, our friendships – but we must persevere, and in
time, a new hope will emerge.

May the Force be with you. Always."

"You know, I am a friend of the Jedi. Oh, the stories I could tell of Hondo and Jedi. So many of them true." Hondo Ohnaka muses as waves his hands through the air for emphasis.

Janos is unable to get a moment to contemplate the message when the medical droid also interjects itself into the conversation. "Oh, dear. I have failed." The droids head drops as it hovers lower to the ground in what eludes to the droid's sadness.

Walking towards the ramp, Hondo pats Janos on the shoulder and says, "Are you looking for a crew? Good news. Hondo is hiring." With that, the weequay pirate steps out of the shuttle with the payment from the Jedi Order. In seeming less than a moment, Hondo sticks his head back around the exit and informs Janos "Oh. I've already sold the shuttle. And I wouldn't be here when the new owner arrives."

Based on Wile's latest transmission, the Zillo's Shadow should arrive in fifteen minutes assuming there's no problem finding an available landing bay.


This thread is for Othniel
Top

"I'll think about it," Janos mumbles to the pirate's offer. A hard knot of cold despair had settled into the Jedi Knight's stomach, and he fights to keep down a wave of panic that is rising within himself. "Droid, what was the message you were carrying for Master Kenobi?"
Top 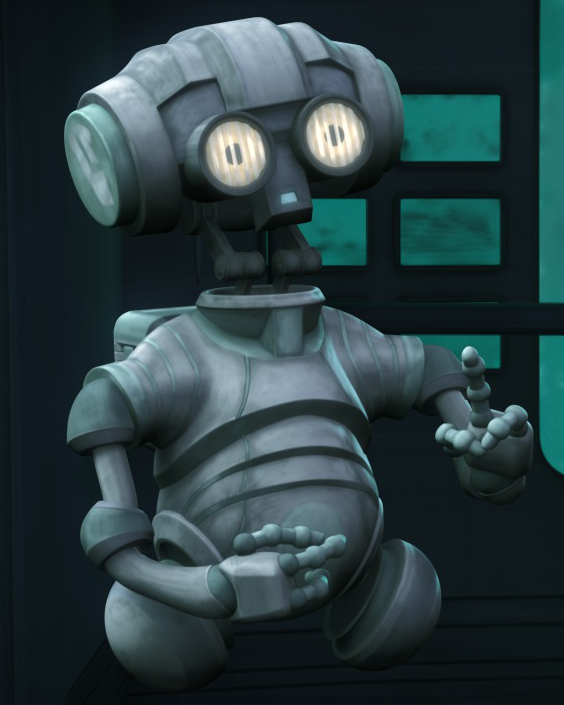 Lifting its head, its eye sockets spin and turn blue. Then blue rays emit from the droid eyes forming a hologram of the head of a clone trooper. The message plays the words of the clone trooper.

"General Kenobi, Skywalker. This... it's... bigger than any of us...than anything... I could've imagined... I only want to do my duty. I am a loyal soldier..., we follow orders..., but this is unimaginable... There's a chip in our heads... the clones' heads... I believe Tup's malfunction is its purpose... I believe we will be force to... take actions out of our controls... We're not a bunch of unthinking droids!... But this chip... it can override our thoughts take away our free will... We need to find out who controls this, so we can disable it.... Got to go. Fives out."
Top

"Forced to take actions out of our controls?" Janos repeats the phrase as he ponders its meaning. "A chip that can override the clones' thoughts? Hm. I need to think about this, but not now." The Jedi Knight looks back in the direction Hondo had gone and shrugs. "Well, AZI-3, I guess you're with me for now. Let's move away from this shuttle before whoever that pirate sold it to arrives. There's still a battle going on in space, and I'd rather not be caught by any Separatists."
Top

Exiting the spaceport, Janos hears loud cheers and shouts coming from a building opposite of the spaceport. The exterior leads him to believe this building is a podracing betting area, used to place bets on off-planet podracing. The usual HoloNews race feeds are now replaced with what appears to be an official Republic news report with an image of Supreme Chancellor Palpatine standing before a crowd.

Curious about the news, Janos waves AZI-3 to follow him and moves to listen to the news.
Top

Janos approaches the betting establishment and watches the HoloNet news feed. Many there are already cheering and a handful curse the interruption of their betting activities and races. There's a diverse variety of species present, with those from the Outer Rim territories more common than found in the Core Worlds.

And the Jedi rebellion has been foiled.

Our loyal clone troopers contained the
insurrection within the Jedi Temple and
quelled uprisings on a thousand worlds.

The remaining Jedi will be hunted down
and defeated!

The attempt on my life has left me
scarred and deformed. But, I assure you,
my resolve has never been stronger!

In order to ensure the security and
continuing stability, the Republic will
be reorganized into the first
Galactic Empire!

For a safe and secure society.


The majority of the crowd at the establishment cheer. A few look a bit skeptical, but nobody decides to speak up at the moment.

As the "breaking news" headline scrolls by, the image of a human female continues the news report, "Imperial Intelligence scored a dramatic victory against the Jedi rebellion today, arresting sixty-three senators on charges of conspiracy and treason. All those arrested had also been signatories to the Petition of the 2,000, a formal protest against Emperor Palpatine's new system of regional governorship that was signed by two thousand legislators and presented during the last full Senate session. Is your senator a traitor? Find out more at the end of the hour."

The image shifts back to the live event on Coruscant to construct an image of a Chagrian male. Under the hologram of his head, the title "Grand Vizier Mas Amedaa" is displayed.

Grand Vizier Mas Amedaa wrote: "Through the grace of our Emperor
Palpatine, we were saved from their
treachery.

The Jedi are gone.

The Emperor saw through their
Separatist plots, their lies.

He survived their attempt to
assassinate him.

Never again will we fear the Jedi!" 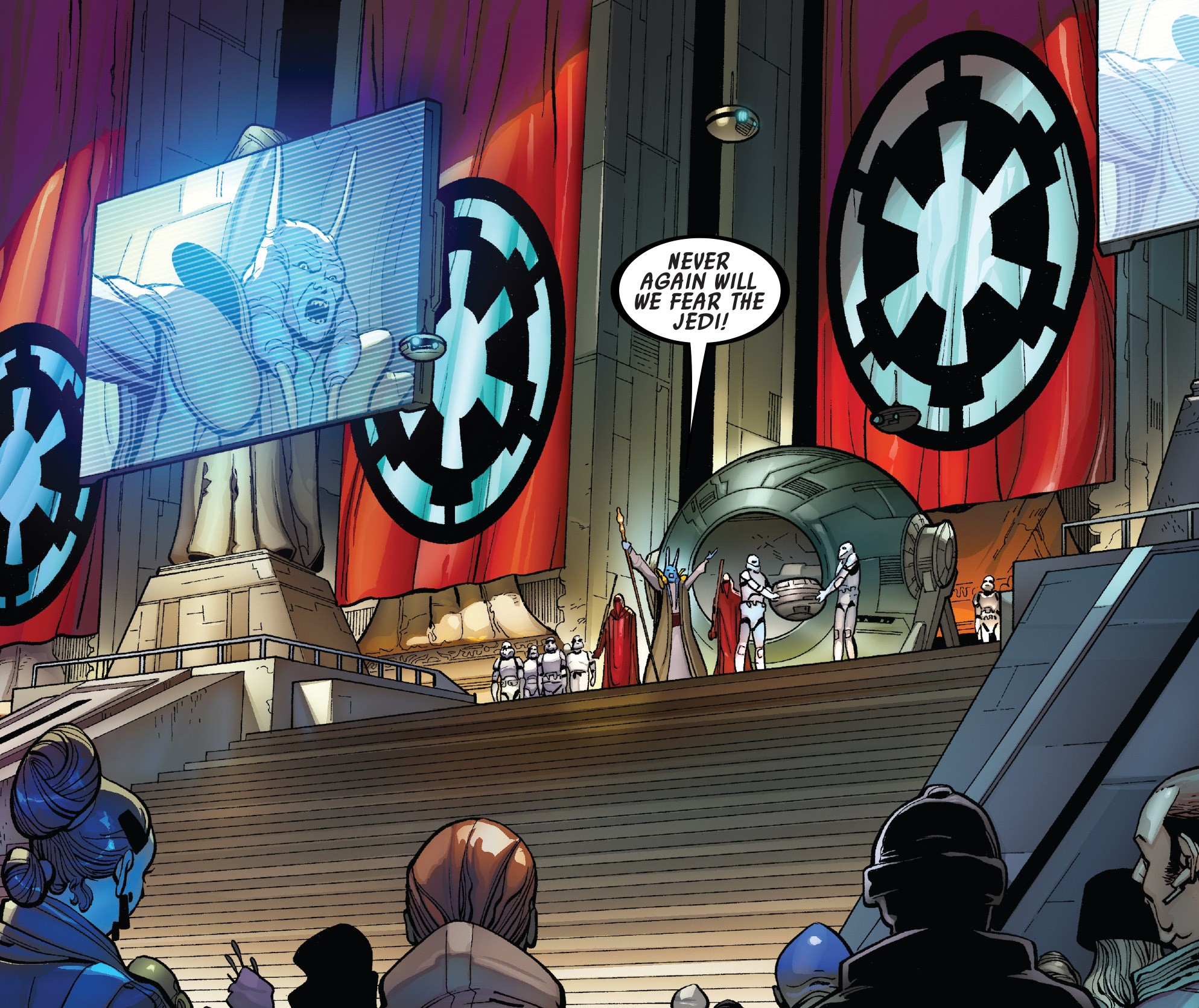 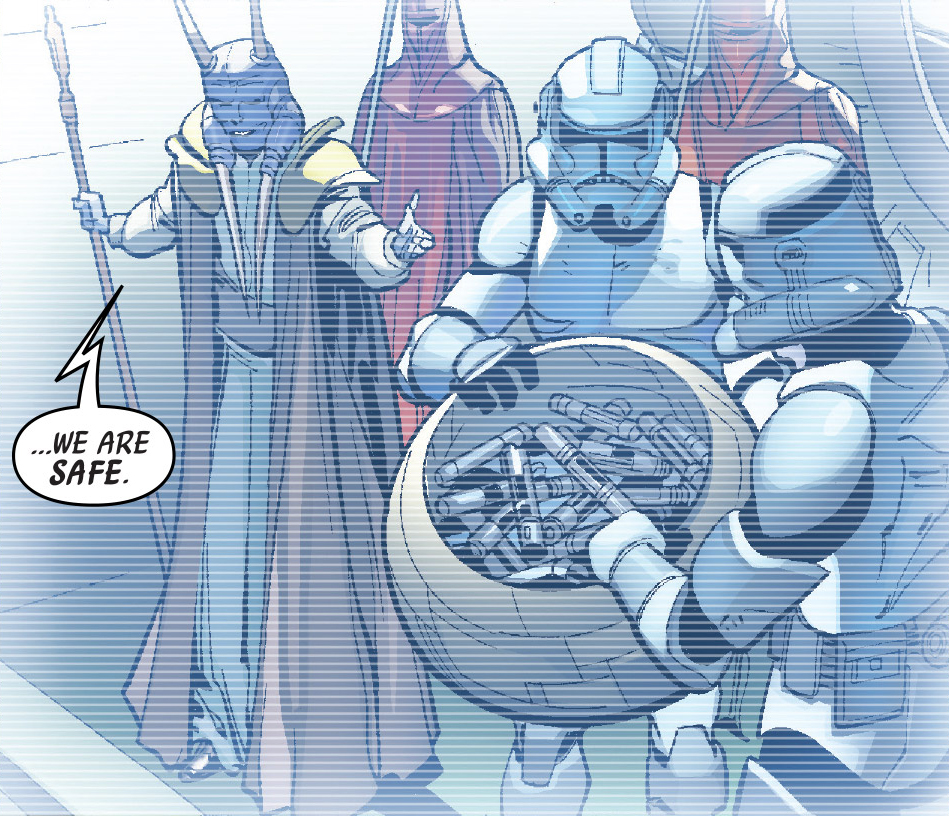 "Stay tuned for more details on the dramatic victory over the Jedi rebellion. This is Fafe Mavval reporting for the Galactic Empire News Network -- Empire united over all."
Top

A shiver runs down Janos's spine as he sees what has happened. Clearly, Chancellor Palpatine had finally made his play for power. But where were the clones to defend the Jedi? They had worked hand in hand for years.

There is no death, there is the Force.

Clearly a great many of his Jedi brethren had died in the overthrow of the Republic, likely including his own former master. The loss of Grand Master Yoda hits Janos like a punch in the gut, but he quickly realizes that he himself is now a fugitive, if the news report is to be believed. The Jedi had been correct to distrust Palpatine's swift rise to power. Thankful that he is not wearing his easily-recognizable armor, he turns to head back toward the docks to wait for Wile. It is now imperative that they leave the planet soon. And yet...

Stretching out with his feelings, Janos searches for the bright spot that might be another Jedi in the system. If there were one in the space battle, they may not yet know the Republic had fallen.
Top

FR2 = roll 2 F = 1 light 1 dark
Use 1 light for Sense basic power
Janos calms his mind and reaches out with the Force hoping to find another force-sensitive being nearby. There's a crowd of emotions and beings in the immediate area that all give off signs of the Force, but he senses one nearby is strong with the Force... Then his concentration is broken by a patron shouting at the HoloNet.

Turning towards the voice, he hears a young male voice shouting "Does that look like the actions of brave men? They're burning lightsabers for fear that they'll be used again! They want you to be afraid! And the Jedi aren't defeated, they were slaughtered! Our own men turned on us in the middle of battle! My Master was murdered by one of our own!"

The other patrons look at the person shouting and begin shouting back telling him to shut up, get out, and other curses. Once the screens return to their podracing events, the crowd ignores the seemingly drunkard or confused young man and returns to cheering and placing bets. A rather large Devaron begins escorting the young male near-human out of the establishment.

On Janos' commlink, he hears Wile. "Uh... You should check out the HoloNews if you haven't seen it and probably lay low and quiet. I'm landing a few clicks west, outside of town."
Top
Post Reply
109 posts