Uri pulls out his electrobinoculars and notices the container is no ordinary container. The "box" as his unit called it, was a ray shielded prison cell. The prisoner cell had both vertical and horizontal inner walls created by ray shields and outer walls made of titanium. The ray shields disbursed all energy weapons including lightsabers, but allows some projectiles such as grenades and missiles, to enter albeit any electronics in the projectiles would get fried passing through the shields. When an organic touches the walls, they suffer an electronic shock great enough to knock out even a Jedi Master. In addition to the ray shields, the cell contains magnetic cuffs used to secure the prisoner's hands and feet against the wall. He had never seen the "box" in use, but each of the Republic's bases had a prisoner cell reserved for containment of Jedi aligned with the Separatists.

Likewise, Janos uses his electrobinoculars to scan the area. The nearby facility had two entrances protected with thick blast doors. A handful of BARC and Aratech 74-Z speeders sit outside the blast doors in the canyon. He spots entrenched bunkers near the doors along with a single guard posted in front of each entrance. Looking ahead, Janos also notices that Bantha Pass, as called by the padawan, has rock debris blocking the pass. Above them, there are several ground-to-air anti-aircraft batteries, each of them having been destroyed by Separatists. 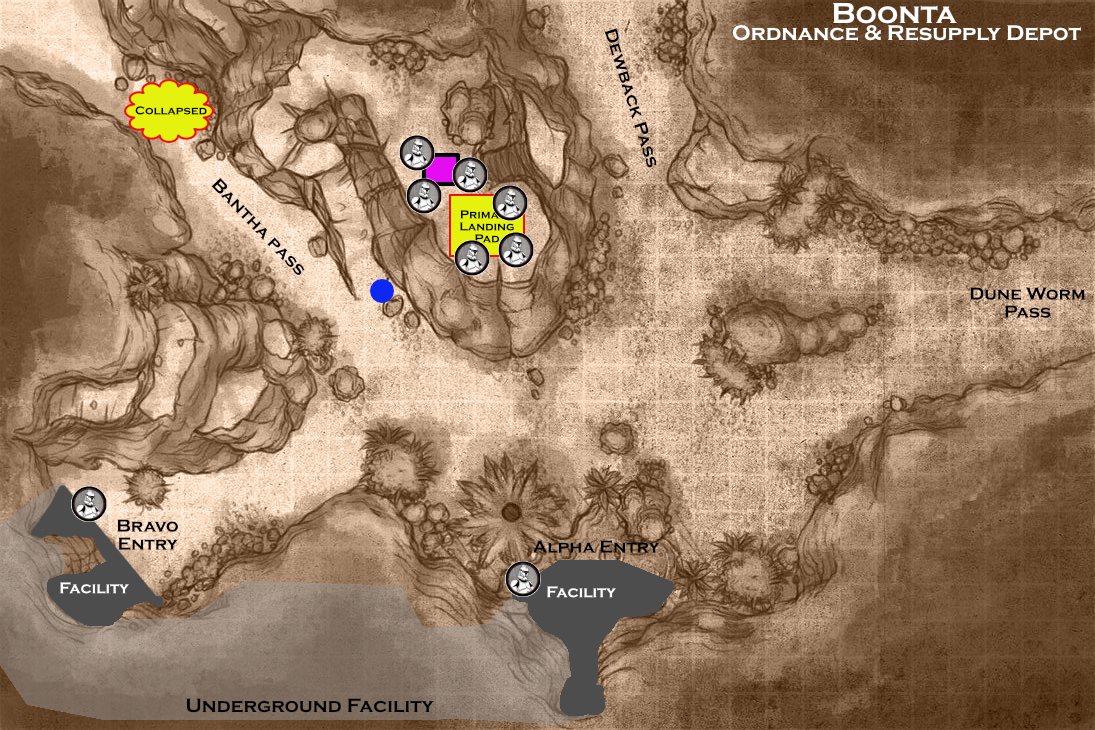 "I think if could disable the ray shields somehow before the fight, Master Lorraf could push his way out with a Force technique, but I don't know how long he would need."

Stealth to top, Misdirect on troopers, toss ion grenade at box, and then engage, looks like our best option. Wish we had a Surprise round.
Top

Janos doesn't answer immediately, but stretches out with his feelings, connecting to the Force and trying to sense all those in the vicinity. "We shall let the Force guide our actions, Uri," he says finally.

Going to use Enhance and try for a light side pip to commit to the Force. If successful, once per turn I can upgrade the difficulty of an attack against me once.
Top

Uri closes his eyes and finds his center. "The feeling I'm getting right now is that whatever we have to do, we should just go for it already. Okay. Let's get into position and use every advantage we have."

With Janos: Stealth to cover on the plateau.
YYY

Then, Misdirect on the nearest trooper. (object/person: Janos)
Force Rating: 2

If additional Light Side remain after 3 troopers around box are affected, add Uri. No Dark Side this time.

Btw, for your consideration as we continue to play: I am not a fan of heists. The planning involved tends to throttle campaigns IMO. I start to get anxious over everything, what I might have missed that could help me or might hinder me, etc.
Top

Spend 1: Sense basic
Spend 1: Once per round, when an attack targets the Force user, he upgrades the difficulty of the pool once.

Not sure why Janos keeps failing these stealth checks, just bad luck?

As the group sneaks ahead, Uri uses his camouflaged and knowledge of the area to his benefit allowing him to slip further ahead unseen. Meanwhile, Janos follows after the padawan. As the elder Jedi communes with the Force, he becomes noticed by the nearby Clone Troopers.

The Clones closest to the two Jedi hear Janos's as he moves closer. Turning as a group, the three Clone Troopers take aim at the Jedi Knight. "They're here." With their heavy blaster rifles, pointed, they squeeze the triggers to fire their blasters. However, Janos' commune with the Force allows him to dodge at the correct timing to avoid the energy bolts. With a miss, they group edges closer to the Jedi.

The Clones on the far side of the landing platform quickly turn and take aim at the padawan. "Roger that." Lifting their blasters to take aim, they fire their rifles but miss the padawan. After firing, they shuffle forward in formation. 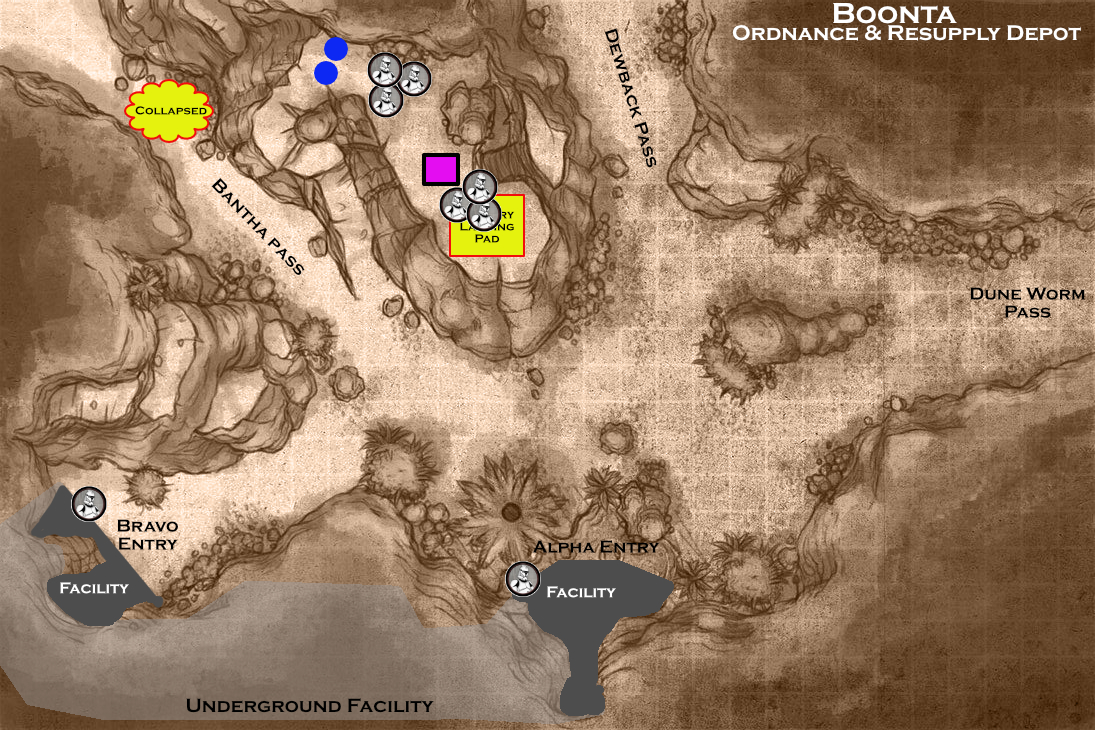 Element of surprise is gone. The ship's cannons might blow the box across the map, but tracking it down would be better than fighting 6 troopers.
Top

Janos's blue lightsaber blade flares to life as well as he follows behind, twirling the blade to deflect any bolts as he attacks.

any reason you switched over to Drash's weapon other than your own? I know it has better stats, he's upgraded it, but I feel your character should mediate or think on it a bit.

Rather than use quick draw (Uri) or maneuver (Janos) to get lightsabers, I'm going to believe you already had those in hand, but we need to keep that in mind as well.

Uri and Janos move forward to attack the nearest Clone Trooper unit. As the two Jedi attack with their lightsabers, the Clones who have trained alongside long enough to be familiar with their basic attacks deftly avoids any critical wounds.


The clones step back away from the lightsaber wielding Jedi and fire their heavy blaster rifles at Padawan Uri. Their blasters are set to stun, which the Padawan soon realizes they mean to capture the Jedi rather than kill them. The Padawan reflects a few of their shots, but he soon becomes overwhelmed allowing two shots to get through his defenses. As the two bolts hit him, he feels an electrical shock throughout his body which takes him by surprise and he drops his lightsaber.

One of the troopers takes a closer look at Janos and says, "You're not Commander Barzane, but we'll take you in just the same."

The troopers on the far side of the landing platform run a few meters closer then pause to fire at Janos. At this distance, the clone troopers should be sharpshooters, but they miss the Jedi. 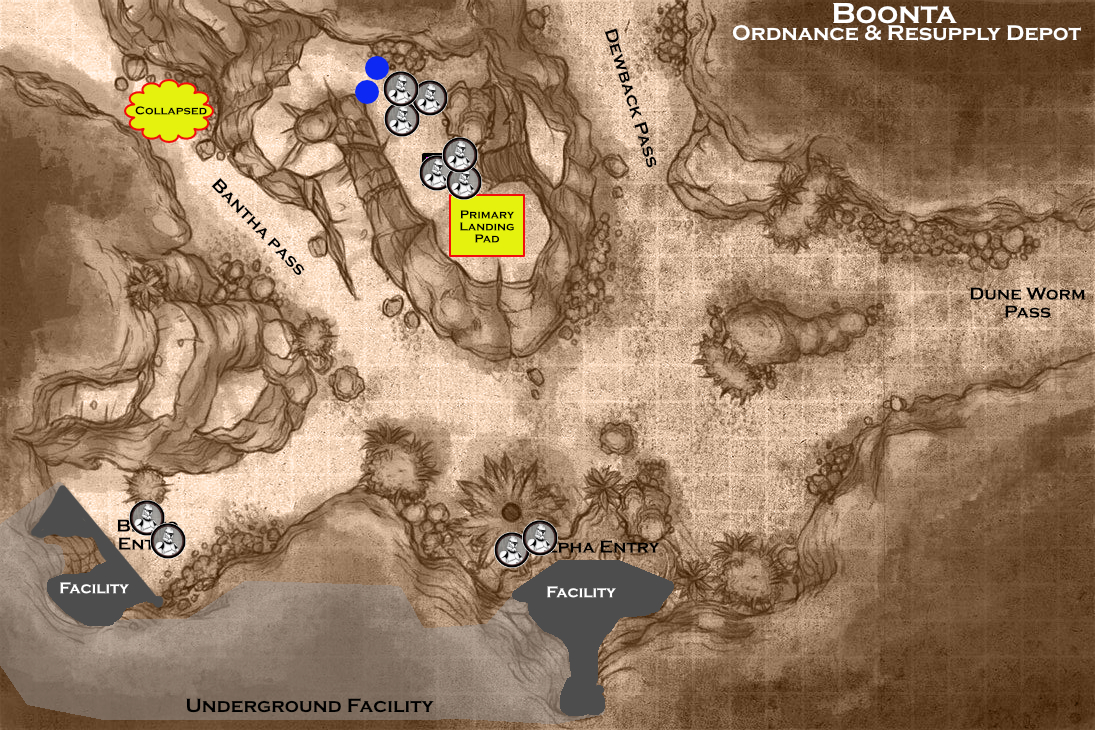 
At the sound of blaster fire, additional Clone Troopers begin coming out of the facility. As they draw closer to the detainment box, labeled D-AY0, the two Jedi sense a yet unseen danger and dread. With Padawan Uri feeling electrified and his lightsaber hilt on the ground and Jedi Knight Janos staring down two Clone Trooper teams, they ...
Top

Uri yelps in surprise as his weapon falls from his hand, and he bends down to pick it up. He wanted to save Master Lorraf, but he should have known that they intended to trap him. Overwhelmed, he pulls out his radio and calls Wile, fighting the pins and needles all over his body reacting to the slightest movement or touch.

"It's Uri! We need backup on the landing pad stat!" Stat. Anytime he heard that word spoken by the troops, it conveyed urgency, so he tried it on Wile.

He begins flourishing his lightsaber with a spinning technique to distract his enemies - Drash Caitken once told him that it was a good trick in a pinch - knowing that the next salvo of blaster fire could knock him out.

He shouts at the troopers to hold their attack, leaning into the authoritative voice granted by his rank, which he no longer had in the new Empire. "Stop! We have a starship inbound!" Pausing mid-spin, he calls out the squad leader, a clone with skulls etched into his shoulder pads. Someone from different squad that he only knew in passing. "Bones? You're Bones, right? Remember the order to blow up Bantha Pass to cover the flank? That was me. Your defense towers are down. We have a starship on its way for support. But I don't want your men dead. Let us take Master Lorraf and we'll leave in peace."

If you had succeeded, then you could have used advantage to "Affect subjects beyond original target", which would have been cool. But you can't apply these uses of advantage (from leadership check) unless it "affected original target" (was successful). Sorry for confusion.

"Roger." Wile responds as Uri hopes to talk down the Clones from attacking them.

The Clones hold their blasters targeting the Jedi. Clone Corporal Bones shakes his head and then stutters, "General... General Nolb ... is dead." He raises his blaster rifle back to point towards the Jedi, unaffected by Commander Athacorr's plea.


It'll be a few rounds before the ship arrives, so you need to stay alive/conscious until then...
Top
Post Reply
109 posts