Come one, come all! Humble performers become leaders of the Circus of Wayward Wonders when tragedy strikes. But as these heroes lead their motley band of performers and roustabouts around the Isle of Kortos, they uncover a sinister plot to exterminate life from the Starstone Isle. The dead god Aroden may be gone, but his legacy lives on, as do his old enemies who would destroy the wonders he raised from the sea. Spectacle meets savagery as the heroes strive to stop the Extinction Curse!
Post Reply
74 posts

All of you are members of a traveling circus called the Circus of Wayward Wonders. You might be performers, roustabouts, or other assistants, but you consider the circus your home. This circus is very new; less than a year ago, several performers in Mistress Dusklight's Celestial Menagerie in Escadar tired of the heartless ringmaster's cruel ways, and quit to form their own circus.

Everyone who quit knew they would need to leave Escadar quickly to avoid Mistress Dusklight's wrath, and committed themselves to the life of wayward wanderers. The new circus's leaders, an elderly circus veteran known only as the Professor, and a bombastic showman named Myron "Thunder" Stendhal, led the Circus of Wayward Wonders out of Escadar, and across the Isle of Erran. After several months of practices and performances for homesteaders and farmers, the circus is ready to perform a large show in a sizeable town. Abberton isn't what many people would consider a destination for performers, but it's where the Circus of Wayward Wonders must start.

The people of Abberton are excited for the circus, as what what the performers hear things haven't been great as of late. Issues with the weather, wilting crops, misfortunes, it seems like things just aren't going their way, and the appearance of an up-and-coming circus is just what everyone needs to take their minds off things. Tonight is the circus's first performance in Abberton, and nearly every resident of the town - including Mayor Jae Abber - crowds the tent to experience the magic of the big top.

The Circus of Wayward Wonders performs in an enormous tent capable of holding hundreds of people - and that's a good thing, as from backstage it looks like everyone, their mother, and their dog is crowding the seats. The prominent citizens such as the mayor have jostled for the best seats, peering at the three rings that fill the center of the tent, waiting excitedly for the show to begin.

Welcome to the Extinction Curse adventure path! Tonight is the first truly big gig that you have had with this troupe. You could be an experienced performer or a circus newbie, a center-stage act or a stagehand. You could have newly joined the troupe, and been part of the original group that broke off from Mistress Dusklight's Celestial Menagerie.

Please introduce yourself, and your general act / part in the circus! The ringmaster (Myron "Thunder" Stendhal) is set to go on center-stage to officially begin the performance in about 10 minutes.
Rule Number 12: "A soft answer turneth away wrath. Once wrath is looking the other way, shoot it in the head."
Top 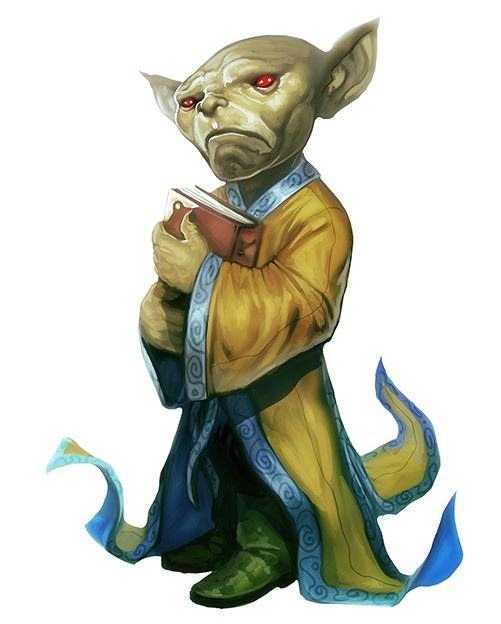 Grong the Great is backstage, donning his extravagant yellow magician's robes as he nervously rehearses the text. Grong is a typical goblin, small, with dark green skin and pointed ears. Having put on his robes, he paces back and forth, trying out different tones of his voice to sound deep and mysterious.

People in the circus know him to be clever, calm (almost shy) and not so talkative. He has been known to sometimes play (harmless) pranks on people who annoy him.

Now he walks over to the place Fireball, his orange cat, is sleeping and pats the animal who gives out a satisfied purring. This seems to calm down Grong a bit as he rehearses some of his magic tricks: Grong the Great does a lot of prestidigitation, combined with some sleight of hand, some card tricks and making stuff disappear and reappear somewhere else again; a bit of fortune telling. In a world full of magic, this is not that impressive, but in his stage persona, Grong can make simple things feel dramatic and spectacular to common folk and those who do not regularly have contact with magic users.
Top

Posts: 10301
Location: The Secret Places Beneath the Earth
Title: Keeper of the Hidden Word

Gorrik is backstage, walking about the performing animals, gently speaking to them to sooth them. He is slim, at least for a dwarf, and walks with an odd grace.

However well trained they might be, performing like this was still unnatural for most animals and they needed someone to calm their nerves. Gorrik is good at that. He is good with animals in general. He is not so good with people.

Gorrik is most definitely not a performer, instead working as a roustabout, primarily with the animals, but also doing whatever odd ends needed doing at the circus. He prefers to keep to himself, spending most of his free time with Ozo, his young bear companion. When dealing with others he is soft-spoken and withdrawn.

He has only recently joined the circus, but is happy with his choice to do so. It seems like a place where a misfit like himself can be at home. And he can help the circus animals by working here as well.
Top

Grong walks through the animal pens and nods respectfully to Gorrik. Fireball likes the dwarf and the cat also likes to play mock wrestling and tumbling around with Ozo, so Grong knows they can be trusted. The goblin smiles at Gorrik: “Ready for the show? I just hope everything goes alright…”
Top

Posts: 10301
Location: The Secret Places Beneath the Earth
Title: Keeper of the Hidden Word

Gorrik smiles awkwardly, then stares at the ground and says, "Well, I don't have to be out in the spotlight. I just have to make sure the animals are okay."
Top

Having spent much of the day wandering the streets of Abberton, the tall and slim man that stood off to one side had got the feel of the town early on and paid little heed to the gathering crowd inside the big tent. He was dressed in a tight fitting costume of black pants, a white long sleeved shirt and a black waistcoat. His pale skin stood out in contrast to the black jacket worn over his shirt and the equally black hair that was tied back in a ponytail.

As the rest of the performers readied themselves, Leclerc limbered up, stretching his limbs at seemingly impossible angles and touching his toes repeatedly in swift, lithe movements. As the escapologist of the show, he considered himself to be one of the big acts of the night and he was taking every possible step to ensure his act went without a hitch.

He'd noticed the Mayor of the town was in attendance and wanted to impress - after all, if the mayor wanted to join the party after the show, Leclerc could always relieve the man of some of his jewellery.
Top

Grong nods, smiling to Gorrik as Fireball strolls around the dwarfs legs. "Come on, Fireball. Let's go!" The goblin moves on to see Leclerc preparing for the show. "Ready to impress?" he says to the man. "I'm sure you're gonna blow them away."
Top

Leclerc nods to the goblin, a crooked smile on his face.

He completed his warm-up routine, rolling his shoulders and neck, his movements sinuous almost hypnotic. Finally, he interlaced his fingers and held his hands above his head, his knuckles cracking loudly.

“I’m sure they’ll love us Grong.. At least while we’re performing for them.” He smiled to the goblin.
Top

This being the first 'big' show that the Circus is doing in this incarnation, a lot of the other performers and support staff are also milling about - socializing, complaining, and worrying.

Elizia the Snake Charmer leaves the animal pen in search for her anaconda, Mister Tickles. Mordaine the Magician is bitching about her place and priority in the performance roster. On the other end the Kanbali family that make up the Feather-Fall Five, the tight-rope walkers and acrobatics showrunners, are in high spirits. They make a break from their own stretching and tumbling to greet and glad-hand Leclerc. While some might see the slim man as horning in on their racket, they instead see him as a kindred spirit. The youngest son sometimes follows the Escapologist around like his own personal fan club, and the father has started brainstorming the concept of a joint act that combines their talents into a whole new thing.

As the group is greeting each other, a small gaggle of children sneak through security and run through the backstage. They giggle with glee as they sprint towards the animals and the supplies, so eager to see everything they are almost bursting with excitement. There is no malicious play at work here, they aren't wrecking anything or panicking any of the animals, but the kids are underfoot with just a couple minutes left until the show officially starts.
Rule Number 12: "A soft answer turneth away wrath. Once wrath is looking the other way, shoot it in the head."
Top

"Hey, you there!" Grong calls out to the kids. "Wanna see something cool?" If he gets their attention, he moves with them to some open space and does a few prestidigitation/ sleight of hand tricks to keep them watching, letting the others prepare the show.
Top
Post Reply
74 posts