The mysterious continent of Xen'drik is a massive landmass that exists south of the continent of Khorvaire, beyond Shargon's Teeth and Thunder Sea. It has recently begun to be explored by agents of the Four Nations in hopes of making profit from the relics found there amongst other natural resources. 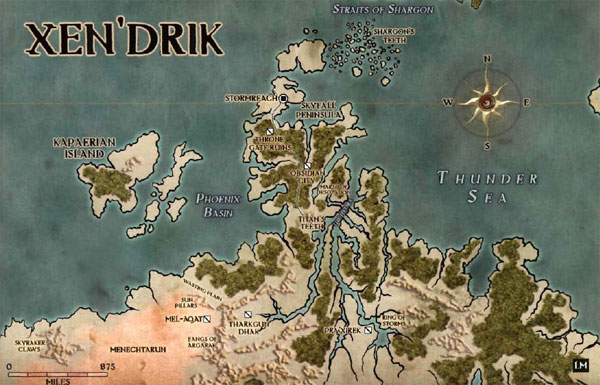 Two Hours After Midnight, Far the 15th of Aryth, Rowing Through the Harbor

After a busy day in the Grey Tower of training, trading, and meeting with the captains of the Grey Company the group is ready to set out once more back into The Crow to find the Shard of Pride.

So with stealth the group silent rows out toward their goal.

The group secures a boat, instead of stealing it the group just rents one from the dozens of fishermen that line the shore. It costs a few gold, but better than tainting the name of the Grey Company over a row boat. It is strong and sturdy and will support the group as a whole. So you pile in and start out into the harbor.

The row out isn't difficult, not too much, but it does take some effort. Nearly thirty minutes later, with Fletcher at the oars, the group is nearing the Crow. Sitting low in the boat, silently waiting for Fletcher to reach the Crow the group looks up at the massive structure. The Crow is a massive stone monument that rises from the waters of Stormreach's harbor. It was once a support for the Griantspan, but with that monument's collapse, the Crow is nothing more than an immense freestanding piling. As with every one of the Giantspan's columns, the Crow is intricately carved and embossed with ancient statuary and bas-reliefs featuring the motif of a specific animal or monster-in this case, hundreds of crow like gargoyles and carvings and decorations. Like all of the surviving pilings, the Crow is 200 feet wide along its midsection (widening to over 250 feet at the upper section where the piling once supported the Giantspan above). The Crow extends 220 feet above sea level, and extends another 50 or feet underwater to the harbor floor.

A tall lancet arch at water level leads into a chamber at sea level within the side of the Crow. Inside is what was once a small, stepped terrace, now filled with sea water to the level of its top step. Three rowboats are tied off to heavy stones placed on this step. Above, the ceiling rises almost all the way up to the top of the monument -- an opening leads off this shaft to the west near the ceiling. At the west end of this room lies a small alcove where floor shows the stain of countless campfire -- the back wall of this alcove has broken through, revealing a passageway beyond.

The Crow itself is located just under half a mile from the Dockway. The ruined piling itself is most easily reached by boat. Rowing out to the piling is a relatively simple task even for someone who has no training in Profession (sailor), although without training it takes 30 minutes to make the journey from the shore to the Crow because of the trickiness of the tidal currents (with a successful DC 12 Profession [sailor] check, this time is halved).


Boat Dock
The inhabitants of Stormreach have long known of this chamber, but the alcove was sealed by a solid stone wall, causing those daring enough to explore the piling to choose to perilously scale this chamber's walls to reach the openings above. According to interrogations of Natalya, the alcove once held a secret door that had fallen into disrepair - Natalya discovered this secret door and the Bilge Rats relocated to this new hideout after she and a few others used pick axes to smash through into area beyond. It is how you entered previously and it appears untouched since you left from here.
Note that on this map North is to the right, the orientation isn't what we normaly see. 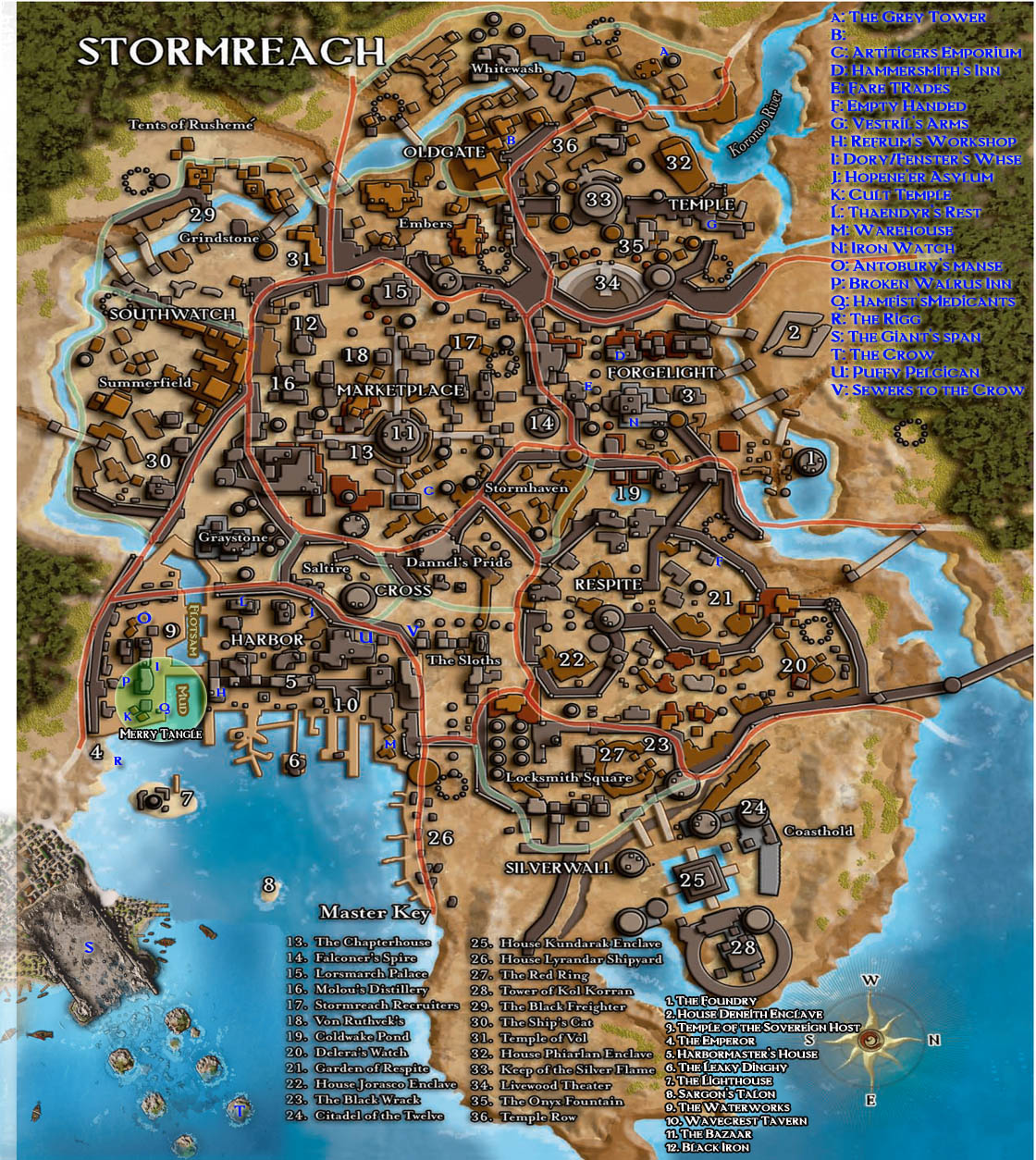 Welcome to Chapter Two: Part 3! This is your second run at the Crow. We don't have to RP all the trips back down to where you left off, but a little RP for the new guy is in order, then we can pick up where we left off, or close enough. I will post the maps to the OOC thread.
"He that breaks a thing to find out what it is has left the path of wisdom." - Gandalf
J.R.R. Tolkien, Council of Elrond, The Fellowship of the Ring
Top

Chapter 2 - The Crow: The Lower Levels

Unlike the previous night, Oloven now wears his usual full plate armor. It looks far more ornate and shiny than before and has newly carved sigils of The Sovereign Host in the chest and shoulders. His heavy steel shield also looks new and shiny with the same carvings. On his right hip is a sheathed longsword and on his left hip hangs a heavy mace by a thick leather strap. "Alright, let us find where we left off." "Hold on! Let me call Shakti." The halfling concentrates and gestures for a minute and then a big raptor materializes by his side. He pats his head and climbs on the saddle on the lizard's back. For those who have seen Shakti before, his claws look bigger and more vicious.

@Vardaen: From now on, please direct any lethal wound on Shakti to Helion.
A.K.A. Tvrod.
Top

After tying off their rented row boat, Fletcher checks his pack for torches, three times now since departing the tower. "Still there!" Standing up, the warforged looks at the mithral armor that is not worn, but simply is a part of him and hopes he will not leave here again with so many puncture wounds. Waiting for Helion to conjure Shakti, Fletcher asks the new recruit, "So Zeevan, are you ready?"
Number Two: "You are number six."
Number Six: "I am not a number, I am a free man!"
Number Two: "Muh ha ha ha ha!"
Top

Zeevan steps off the boat easily, wearing the same outfit he did when he met them at first. Simple but practical. Also, if he falls in deep water he can wriggle out of the leathers rather easily. The Warforged can simply walk back to a harbor, but not this mortal. "Ready enough. I'm looking forward to the grand tour."
Rule Number 12: "A soft answer turneth away wrath. Once wrath is looking the other way, shoot it in the head."
Top

The company makes their way through the Crow. Its a maze of passages, and corpses now. You head up, then down, then down then up, you dangle from the overhang far above your boat at one point then find the passages down. Down down down... and you are once more into the catacombs and dungeons where you left off. It doesn't appear much has changed since you left, other than flies on corpses and the smell along the way.

Down into the dungeons you arrive with several options, south through the webs and the giant spider there to the kitchen area and the centipedes, or perhaps to the cells where the Sinspawn is trapped, or another way altogether. 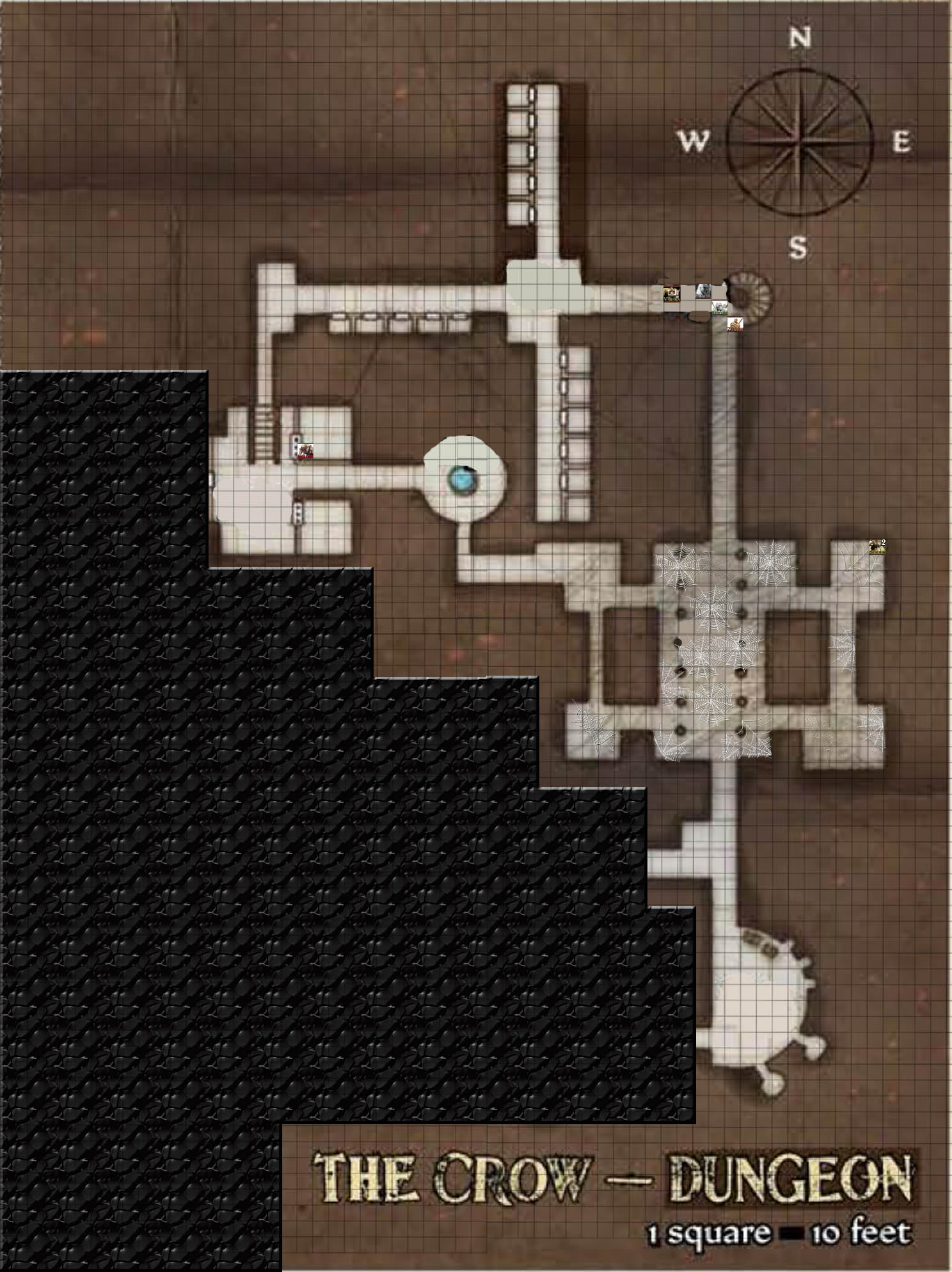 "I think we should take care of the Sinspawn now before we start to use our resources. I imagine that will be a tough fight."
A.K.A. Tvrod.
Top

"I doubt we would want to be escorting it throughout the Crow. We should check on it to make sure it is still there and come back for it on our exit. There can't be too much left to explore." Oloven draws his longsword and mutters a quick word and light engulfs the blade.

Zeevan shrugs. "You're the experts on this place, I'm just the new guy. I'll follow along with my weapons ready."
Rule Number 12: "A soft answer turneth away wrath. Once wrath is looking the other way, shoot it in the head."
Top

The warforged stands with the others as they ponder the next course of action. "I think Oloven is right. Let us fully explore this place, then we can backtrack and tie up any loose ends."
Number Two: "You are number six."
Number Six: "I am not a number, I am a free man!"
Number Two: "Muh ha ha ha ha!"
Top
Locked
994 posts