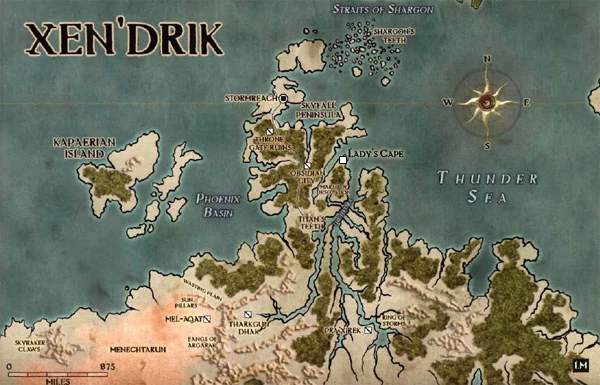 The Dark Continent of Xen'drik

The mysterious continent of Xen'drik is a massive landmass that exists south of the continent of Khorvaire, beyond Shargon's Teeth and Thunder Sea. It has recently begun to be explored by agents of the Four Nations in hopes of making profit from the relics found there among other natural resources. 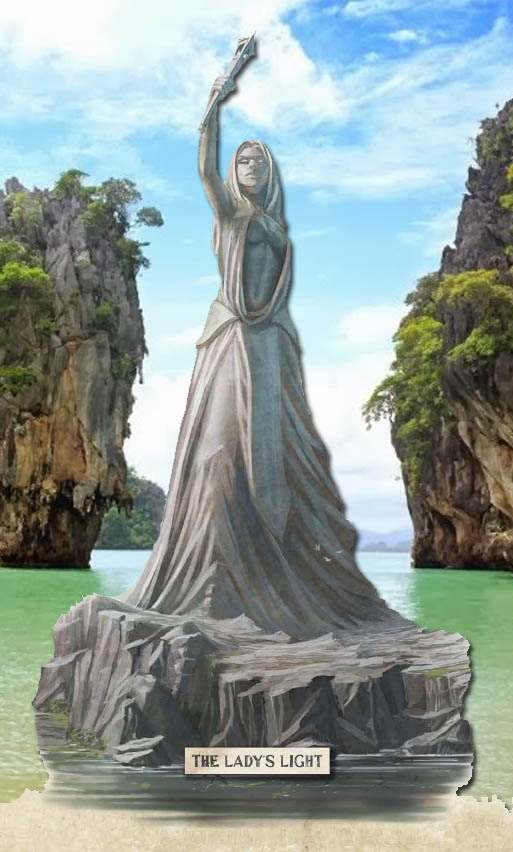 You can see cleared circles at 1 and The Big Lady. Those are underground locations you were at!
The long trip from Stormreach into Xendrik actually went pretty well. A few dangerous encounters along the way were nothing compared to getting lost if you didn't have your guide Jasper. Jasper is an old man, a priest of the Soverien Host, and certifiably insane! Still he go you to the Lady's Cape. From there you met with the 'friendly' hermit Maroux, and after a minor task for her she shared her knowledge of the cape with you; mostly to get you to leave her alone. The Grey Company explored the region only until finding the Troglodyte caverns, and after a fight or two freed the rest of the Trogs from their oppressive leaders and made peace with them, even some trade deals are in the works to bring rare plants to Nirus back in Stormreach.

The Trog's, thankful for your help, send you under the lagoon through old tunnels to a strange chamber guarded by living statues. After defeating them you leap, climbed, and floated down a dark shaft into the chambers of the Lady's Light.

One by one you eventually made it down the pit either by leaping into the darkness or using the rope, either way you entered into utter black, complete silence, and a near weightlessness as you floated down to the entrance chamber of the Lady's Light.

The ceiling of this grand hall is made of polished gray marble. It rises to a height of twenty five feet, supported by ornate columns whose central eight-foot-sections have been carved to resemble a beautiful woman. A ten foot square platform sits in a wide alcove on the north wall, atop which lies a white marble sarcophagus with a painted lid. The sound of gently running water echoes along the hall to the west. From the ceiling glass orbs, with magical light provides bright light in the chamber.

A broken, headless, statue lays on the ground at the bottom of the passage. 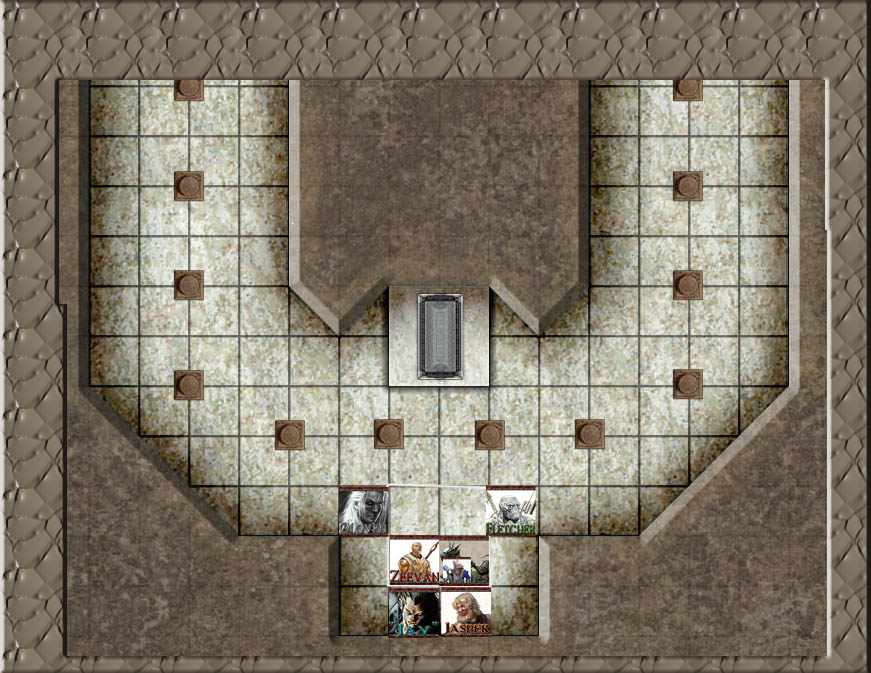 Welcome to the next chapter of the book. Everyone should be 6th level. If you aren't finish 6th level ASAP.

No time has passed since the end of Chapter 1, we pick up where we left off with only one short commercial break.
"He that breaks a thing to find out what it is has left the path of wisdom." - Gandalf
J.R.R. Tolkien, Council of Elrond, The Fellowship of the Ring
Top

Fletcher is hesitant to release the harness but eventually does so and floats gently down to the stone floor. Stowing his bow and readying his greatsword he is puzzled by the ornate chamber. Looking at the sarcophagus, "So, are we to ignore the proverbial mastodon in the room?"
Number Two: "You are number six."
Number Six: "I am not a number, I am a free man!"
Number Two: "Muh ha ha ha ha!"
Top

Je turns his attention to the sarcophagus, examining it intently.

Detect Psionics, as well as, you know, using my eyes.
A spectacular memorial. Whoever this person was, they were interred quite grandly.
"Me go too far!"

Attention turns to the sarcophagus, both the figures represented in the columns, and on the painted lid of the stone coffin depict a beautiful dark haired,lithe woman sleeping with arms crossed over her chest - a detailed depiction of well someone.

A few quick spells and powers, and you determine that there is no magic/psionics at work on the stone lid, but a rough guess does put the massive lid someplace around 600 lbs.
"He that breaks a thing to find out what it is has left the path of wisdom." - Gandalf
J.R.R. Tolkien, Council of Elrond, The Fellowship of the Ring
Top

"Kinda makes you wonder what's inside," Rikkan says, checking on Scales and reassuring the beast after the terrifying drop through darkness. "Is it untold riches or an angry mummy that wants to kill all who disturb it?" He twitches his nose. "Me, I'm hoping for the riches. What about the rest of you? Do we open it up to find out?"
Top

Zeevan scratches his nose. "Remind me, what do we know about this place? Any important Gods we should be worried about offending? Or just an old ruin that we likely can loot without consequence?"
Rule Number 12: "A soft answer turneth away wrath. Once wrath is looking the other way, shoot it in the head."
Top

Jasper is looking around, "Rune Lord! That's who we are hear to offend. We shall tell them that the past is the present and we are the bringers of the future!" He babbles on for a few more minutes but none of it makes any sense expect the point about him being hungry, which reminds some of you that you are also.

Runelord! you are here for the next Shard, ancient heathen gods maybe in play here on Xendrik, but as far as offending some Gods or some such, nah, no worries there.

You also have 2 open side quests

viewtopic.php?f=721&t=7407
"He that breaks a thing to find out what it is has left the path of wisdom." - Gandalf
J.R.R. Tolkien, Council of Elrond, The Fellowship of the Ring
Top

Fletcher casts a sideways glance at Jasper as he rambles on about offending some Rune Lord. Stowing his greatsword as there seems to be no immediate threat in the area, the warforged walks over to the sarcophagus. As he inspects the lid, "Katarina tasked us with artifact recovery in the depths of Xen'drik." Looking back at the others, "There may be something inside this sarcophagus that qualifies, or at the very least may help us in our current endeavors."
Number Two: "You are number six."
Number Six: "I am not a number, I am a free man!"
Number Two: "Muh ha ha ha ha!"
Top

Someone so lavishly entombed is unlikely to be sparing on his personal remains.

Je pokes through his backpack, clearly looking for a prybar or similar tool.
"Me go too far!"

"Well, I'm in then. Let me handle checking for any unexpected surprises. Then we can work together on getting that pretty little lid off." He moves forward and checks out the sarcophagus.

Usual check for traps. Then let's loot this place!
Rule Number 12: "A soft answer turneth away wrath. Once wrath is looking the other way, shoot it in the head."
Top
Locked
1006 posts