"Stick to the forest-track, keep your spirits up, hope for the best,
and with a tremendous slice of luck you may come out one day
and see the Long Marshes lying below you, and beyond them,
high in the East, the Lonely Mountain where dear old Smaug lives,
though I hope he is not expecting you." - Gandalf In the last days of November, several days after the festival known as The Gathering of Five Armies that commemorates the defeat of Smaug and the Battle of Five Armies, you have come to the edge of Lake-town. Dale was overflowing with people from all the realms of Wilderland. The festival has some to a close, but many folks remain in Dale or have returned to Erebor or Esgaroth. The elves of Mirkwood have returned home, but Dale and Lake-town remain busy and filled with folks on their way here or there.

So you have avoided Lake-town and have found Baldor waiting for you on the road that leads out of the front gate beyond the bridge. You have signed on with him and his young son Belgo to travel through Mirkwood to the Forest Gate. Baldor has already planned the journey, although aw ell traveled companion could make suggestions. He has spoken to you of his plans and plans to meet with Elvish friends of his at the edge of Mirkwood, and these Elves will accompany the caravan up the river on paddle-boats. From the Elvenking's hall, the company will set off down the Forest Path to the west side. The caravan consists of Baldor, Belgo, and four ponies. He already has plenty of travelling supplies for the company.

Baldor awaits the company along the banks of the Forest River, planning to take a well-traveled path that runs alongside the waters. 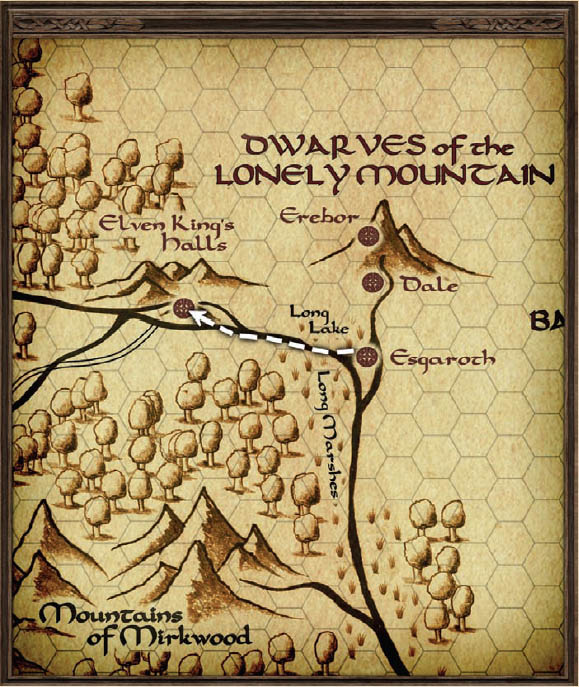 Last edited by Vardaen on Wed Apr 08, 2015 6:58 pm, edited 3 times in total.
"He that breaks a thing to find out what it is has left the path of wisdom." - Gandalf
J.R.R. Tolkien, Council of Elrond, The Fellowship of the Ring
Top

Aerth has traveled with the others to where Baldor awaits. When he spots the man and his child, he simply lifts a hand in greeting. "Good day," he says, his left hand holding his large shepherd's bow. He has a quiver of arrows on his back, along with a long handled axe. Aerth wears a cap of iron and leather, as well as a leather corset. Otherwise, his clothing is a mixture of browns and greens, which is common among those that travel the Wilderlands.
"Kings have no friends, only subjects and enemies."

From a distance, Aerth and Baldor sees a walking shield. The huge barrel-shaped great shield bobs up and down at a constant pace. As it draws near, the two taller folk see that the shield is severely worn and dented. The markings and symbols embroider most of the top and bottom portions. As the shield gets within a few paces, they see a pair of dwarven boots and hear Borir's grumblings.

Soon, the shield turns to the side and Borir stares up at the two. The dwarf is outfitted in a dwarf-wrought hauberk. The mail-coat appears worn, but sturdy and dwarven made. Borir has an axe in one hand, along with a shortsword and dagger equipped to his hauberk.

Grunting at the two, he says, "Well, when are we departing? Have you seen Master Brandybuck anywhere? I haven't seen him since yesterday?"
Top

As Borir asks his question, Pipkin rounds a corner, leading a small pony by the bridle. The pony is packed with what looks like extra food, which should surprise no one who has come to know the hobbit.

"Good morning, all," he says when he gets within earshot. "I took the liberty of buying a few extra supplies, just in case." It was nothing personal, the hobbit thinks. It was just that men, elves, and dwarves didn't seem to understand elevenses, or late afternoon snacks, or a number of other hobbitish meals.
Top

Varuthil joins the others, walking her light elven steps. Her white-blond hair is bound up in a braid and she wears a grey-green dress, with the skirts divided for riding or walking through the woods. Over it, she wears a leather shirt. At her waist are a bow and short sword. She may be a scholar at heart, but like every Elf of Mirkwood, she has had some training in martial skills. She simply nods and says, "Good day, all," to those gathered, then stands silent and watching.
Top

Wren is the last to arrive, "Apologies if I have kept you waiting..."

Wren's dirty blond hair is kept out of his face by means of an ornate band. His cloth wears are muted greens and browns while over that is a worn but effective set of light leather armor. He wears a hooded cloak laced with the seasonal foliage of the time. A quiver dangles where a sword might and a short sword is stowed where a quiver might. Last but not least, slung over Wren's shoulder you find a Woodland bow.
Number Two: "You are number six."
Number Six: "I am not a number, I am a free man!"
Number Two: "Muh ha ha ha ha!"
Top

One by one the group arrives, some make more of an entrance than others. The added pony of Pipkin's will make it five total pack animals in the caravan. Baldor stands before everyone, leaning on a walking stick. ""I want to welcome you all and thank you all once again for your help with Jonar and for joining my caravan. This will not be a short trip, and it may have many dangers between here and Forest Gate, but you will get paid well, and maybe have some adventure along the way."

His son smiles, "Mirkwood is so exciting!"

Baldor rubs Belgo's head, "It is, its dangerous too, so we will stay on the road the whole way. I've plotted out our route but we'll have time to talk about it once we get to the Elf King's domain, I'm open to any suggestions you might have, or knowledge of the area you might know about."

"We'll start by heading up river about an hour's easy walk to a small loading area where my elven friends will meet us and load us onto rafts and pole up the river." He pats Belgo on the shoulder, "Belgo go double check the horse's ties." His son, eager to help, runs over to the ponies to check them. Baldor lowers his voice and steps in closer so his son can't hear. "Please, I don't want him to know, but my business is on the edge of a knife. Not everyone has prospered since the death of Smaug. I lost everything buy Belgo when the dragon attacked Lake-town, my house, my shop, my wife.... only Belgo, my pride and joy. However, if this venture fails, we'll be out on the streets, and I can't do that to him. So please..." he looks on with wet eyes.
"He that breaks a thing to find out what it is has left the path of wisdom." - Gandalf
J.R.R. Tolkien, Council of Elrond, The Fellowship of the Ring
Top

The man considers Baldor's words, then says, in a reassuring voice, "We will not fail you, Baldor, worry not."

Aerth seems confident in this fact, standing tall and proud, attempting to exude confidence so Baldor will take heart.
"Kings have no friends, only subjects and enemies."

"Don't worry," Pipkin says with total conviction. "We'll make sure the caravan gets through so that your boy has a bright future ahead of him!"
Top

Borir is moved by the man's words and is conflicted about Smaug's destruction upon Lake-Town. On one hand, the death of Smaug allowed his kin to return home but it also brought about much pain to those caught within Smaug's path of destruction.

The dwarf finally pipes up, "And don't forget, I'm here. You ever hear a story about a dwarven caravan not making it through to their destination? Nah, Me and my axe will clear the path as long as the darned elves don't cause problems."
Top
Locked
341 posts