â€œIt is not our part to master all the tides of the world,
but to do what is in us for the succor of those years wherein we are set,
uprooting the evil in the fields that we know,
so that those who live after may have clean earth to till.
What weather they shall have is not ours to rule.â€

The characters have wintered at Woodland Hall following their first adventure together. They met at the Gathering of the Five Armies, where a number of young idealistic individuals congregated in the hopes of contributing to the resurgence of the Free Peoples. Adventure soon followed when they were tasks with escorting a caravan from Dale to Woodland Hall by a merchant Baldor and his young son Belgo.

The group arrived in Woodland Hall after many trials. Unsure of how to proceed, and with winter closing in around them, the company remained in Woodland Hall to see out the cold weather. The Woodmen welcomed the company to their settlement and gave them shelter over the winter. Idle would be the wrong word to use about the days of the fellowship in Woodland Hall. Now however with the promise of spring it is time once more for men and elves and dwarves and hobbits to take to the world.

Having made a name for themselves the Woodmen ask the company to help them gather in some food on one of the many hunting expeditions setting out into Mirkwood.

As the various hunting parties gather inside the gates of Woodland Hall's wooden palisade, a crowd gathers to celebrate the occasion and wish for a bountiful day. Children laugh and scream as they chase each other through the assembled throng. Dogs bark in excitement, eager to be off. Woodsmoke adds a pungent texture to the crisp morning air.

In front of the gates, the chiefs of the village's most prominent families draw their conversation to a close and bid each other good hunting. As they return to the parties they are leading, the gates are unbarred and swung open to the sound of hunting horns and the cheers of the settlement. The cheering continues as the Woodmen depart on the first hunt of the year. You take your places in the procession, following Amalric, the leader of your party. Once you are outside the palisade he leads you east, towards the forest.

The day is overcast and dew is thick on the grass as you approach Mirkwood. The world has the feel of having not yet fully woken up. The Woodmen seem in good spirits, competing with ever more outrageous claims of what they will be bringing back to the village at the end of the day. The hounds are racing ahead, chasing each other through the meadow, periodically returning as though demanding that you try to keep up with them.

Welcome to the next chapter. I'm just throwing you into it, you can feel free to back post a little.

The characters make up a hunting party with four Woodmen: brothers Amalric & Evoric, Heva and Thorismund. Amalric and Evoric know Borir and asked him personally to join them, and he in turn invited you to join. Your various ventures over the winter have made you semi-well known so you were easily accepted to join the hunt. 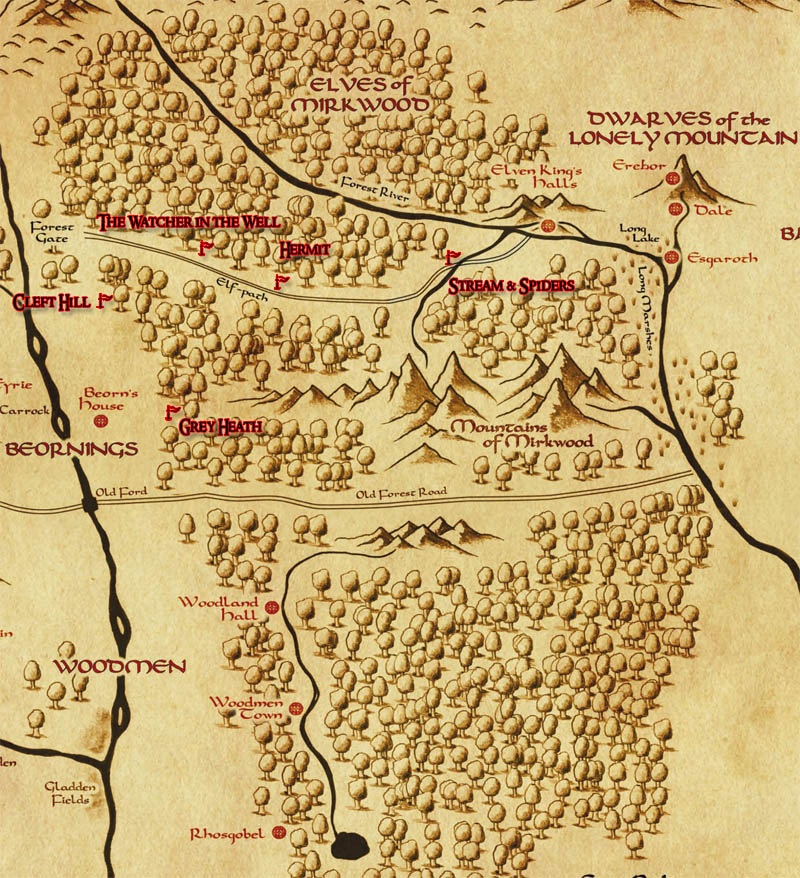 Last edited by Vardaen on Tue Aug 26, 2014 7:46 pm, edited 2 times in total.
"He that breaks a thing to find out what it is has left the path of wisdom." - Gandalf
J.R.R. Tolkien, Council of Elrond, The Fellowship of the Ring
Top

Varuthil joins the hunt on Borir's invitation. She sees it as a chance to explore this part of Mirkwood in the company of the Woodmen, who are quite knowledgeable about this part of the forest. And if she catches some game, she can help repay the generosity of their hosts.
Top

Pipkin has spent months examining carvings and sitting at a desk writing about them. With the coming of spring, he is eager to get outside again and see the sun. As a result, he's eager to accept Borir's invitation to the hunt. He knows that he's not likely to be a great addition to the hunting party. But then, with a couple of Mirkwood elves in the group as well, he's sure they can afford to have a hobbit along as well.
Top

Aerth plays with the hounds before everyon strarts off. On his knees they gang tackle him and roll around in the we grass. The half-elf laughs and crawls back up as the hounds take off and chase each other about. Before setting out, Aerth strings his large bow, ready to shoot down their prey to feed the Woodmen. He had eaten his share this winter, and it was time to help pay that debt back.
Top

Borir walks along with the group, holding his head high and sticking out his chest. The dwarf is proud of his first hunt and the story about the size of the wild boar which he killed grows during each time he tells the story. Most recently, the boar was nearly the size of a horse.

He looks around to the others and says, "Good to be opening the gates."
Top

As the gates open and the horns blow, the spectacle must look like little armies trotting off to war. As they wait to depart, Wren smiles knowing this is not the case as he puts the finishing touches on a wood-carved figurine. Now about to move out, Wren breaks formation and gives a child the carved figurine. Returning to his group, "So Borir, how big was that boar again?"
Number Two: "You are number six."
Number Six: "I am not a number, I am a free man!"
Number Two: "Muh ha ha ha ha!"
Top

The fellowship is finally on the move, the winter is gone and spring is here. Everyone has a good reason to want to be on the hunt, and least of all among them is the need to break that cabin fever. Aerith tussles with the hounds, the large woodmen dogs snarling and snapping, but always in a playful tone until Amalric calls the hounds back to him.

"They are not children to play with Aerth." He is serious, the more serious of the brothers that lead your particular hunting party. Evoric is more light-hearted and extricable as Borir knows. The younger brother falls in with Borir, "Good to have you back with us Borir." He hear's Wren and replies to the elf, "It was three feet if it was an inch." He makes a motion with his hand to show how high it stood, the young man exhagerates about as much as Borir has been over the winter.

Two others are with your group, Heva, a warrior maiden who falls in line with Pipkin. "So you are the halfling? I suppose we'll be seeing more of your kind since the days are not so dark anymore with the Necromancer gone and the Orcs culled." She looks all the warrior, able to hold her own in the forest with the men.

The fourth woodman is introduced as Thorismund, but he only nods to you, reluctant to to drawn into conversation as you head out.

Amalric points forward, "We know Borir's skill, but the rest of you? What of your abilities on the hunt? We must organize our hunting party based on ability."
"He that breaks a thing to find out what it is has left the path of wisdom." - Gandalf
J.R.R. Tolkien, Council of Elrond, The Fellowship of the Ring
Top

"I'm not so sure," Pipkin replies to Heva. "Most hobbits are confirmed homebodies. Not many like to travel, like I do. You may see a few. You grow a very nice pipeweed, and some will come to buy that. But I wouldn't look for many of us at the Woodland Halls."

When the question of hunting ability comes up Pipkin looks sheepish. "I'm passable with a bow," he replies. But I don't have all that much practice hunting."

Pipkin has a Hunting 0.
Top

"I've been trained in the basics of hunting," says Varuthil, "but I would not claim any great talent in it."

Borir puts a hand on Pipkin saying, "He's a modest hobbit. You should tell the story about your skills against the spiders in the forest. I think Pipkin shot two or three before they could attack us."


Strange, I remember posting to this, but its gone...
Borir just has Hunting 1, which he learned during this fellowship phase
Top
Locked
312 posts