Rolling up great stories one post at a time. A Play-By-Post RPG forum dedicated to having fun with multiple genres, systems, and settings.
http://www.dicefellowship.org/

â€œAnd now leave me in peace for a bit!
I don't want to answer a string of
questions while I am eating.
I want to think!"

It has been two months since the Battle of Woodland Hall and the great feast where first was sung the song "Saviors of Woodland Hall" in your honor. The summer months have been kind to you and to the Woodmen. Hunting has been good with the defeat of the Orcs in southern Mirkwood. Often have the Woodmen invited you on their trips into the forest. The wealth from Baldor's caravan that brought you here has slowly dwindled, but the Woodmen people are kind to you, ever being generous in remembrance for what you've done for them. The fact that Radagast the Brown has spoken highly of your actions those many months ago also still rings in their ears, and so you've lived a comfortable life among the Woodmen.

In fact Radagast the Brown has taken a bit of a shine to you, and you to him. The Bird Tamer has asked you to take a few letters north to the Easterly Inn to leave for his friend Gadalf the Grey. Since your first trip to the Inn was short and pleasant everyone has agreed to this simple task from Radagast. It is a chance to refill pipeweed pouches, get news from Erebor, and the East. Its summer, and the weather is fine, so you've packed lighter, but not without the proper supplies.

You expect the trip to take between ten and fourteen days depending on the weather and the speed that you can travel. You've know made this trek several times and that helps with your planning. Gathered at the gate of Woodland Hall you say some good-byes to the friends you've made over the last year here and put foot to path and start off north!

A few woodmen scouts lead you along the hidden road north of Woodman Hall, shaving a few hours off your travel time until you exit the eves of Mirkwood and head out into the Vales of the Anduin proper. The men turn back there waving once then ducking into the dark forest. You stride north, with a half full belly Pipkin already is worried about his next meal but he says nothing about it and instead lights a pipe as he walks. You lead your lone pony through the late brown summer grasses and you look north back the way you came only this past spring.

Welcome to the third Adventure Phase, we are moving right along and I'd like to keep up that traveling pace. I am very much still enjoying this game so I hope you guys are as well.

Check the OOC for Travel Infomation, we have to set a few things OOC as we set out IC.

I'll be adding a place on your sheets for bonus dice so we can track these better. Sheet edited. 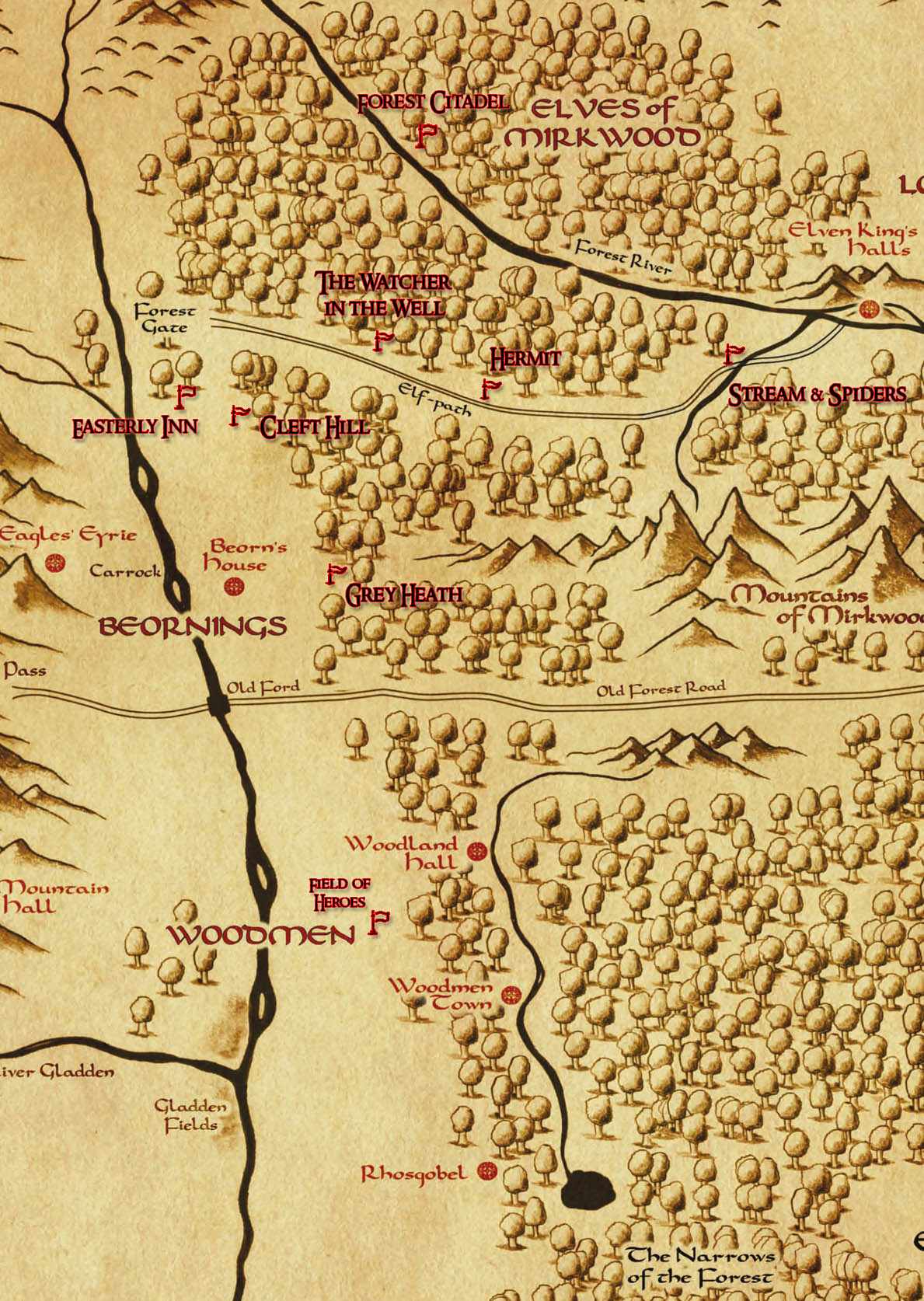 by Muskrat
As they set out, Varuthil finds herself mentally gnawing on what had Radagast so rushed and apparently flustered. She finds herself wondering if the orc menace still lingers, despite their victorious battle against them. She also finds herself hoping that they may actually meet Gandalf the Grey, though she knows it's likely that they simply leave the letters with the inn-keeper without meeting the wizard. As always, she keeps her thoughts to herself and says little to her companions.

by TetNak
The half-elf is happy to be on the road again. Although fond of Woodland Hall, Aerth is a wanderer through and through. His axe and sheperd's bow at the ready, he moves long with the others. Once they get far enough from Woodland Hall, he will start scouting for places to rest, avoid, and any trouble that might find them. "How is your pipewood stores, Pipkin?" he asks, being particularly happy that they will be able to get more. Aerth has been one of Pipkin's biggest customers when it comes to buying the leaf.

by Eilandor
As the woodmen scouts begin to turn and duck back into the cover of the woods, Wren gives a nod to his friend Imnachar. He learned much from the man during their stay. On foot and gnawing on a piece of smoked turkey, Wren falls into his usual position of looking out beyond the task at hand for any would be trouble. Wren notices Varuthil, quiet as ever and walks up besides her and nudges her arm, "What a day, yeah?" With a quick smile, he simply moves on and continues with his duties as they travel.

by Shurijo
Borir trudges along and ever so often he calls out to the others to "Step it up!" and "Let's not dawdle like a bunch of elves picking out formal attire all day. We have somewhere to go!"

by Muskrat
Varuthil gives Wren a very puzzled look as he walks away from her. She snorts at Borir's comments. "I assure you, Master Dwarf, not all elves dawdle over their choice of clothing." She seems more amused than offended.

by Vardaen
Pipkin chides Borir as he walks past him pulling the reigns on the pony, "Now now Master Borir, a good waistcoat with the proper buttons can make all the difference." He smiles as he puffs on his pipe and waddles along on his hairy feet.

The trip is comfortable and about the length of time you expected for the first half. You follow along the eves of Mirkwood moving in the open area west of the forest. It gives you an easy land mark to follow and the travel is quick. You've taken this way several times already and you know it well. Laughing and joking along the way your only encounter is with a small herd of deer that you surprise one evening before setting up camp, they bound away into the forest before you can bring your bows to bare however.

Still Pipkin is an excellent cook and you've packed well. Borir guides you and keeps you moving on the straight and narrow way, so that when you find the markers of the Old Forest Road you are right on schedule. Some of you have some blisters on your feet or are just ready for a rest, but its minor considering the last trip.

No Hazards
Half Way. Just at the Old Forest Road (aka near the Old Ford) about to leave Woodman lands and enter Beorning Lands

by Muskrat
Varuthil walks along with the others, usually saying very little, admiring the beauty of the forest and looking forward to the day, however distant, that the Shadow is driven from it.

by TetNak
Aerth smokes the last of his leaf that night. He lays by the fire and blows smoke rings into the air as he peers into the night's sky. Even though he was used to Woodland hall, the open air, free of noisy distractions and the smells of men, was never far from his heart. It was a pull and push, his racial makeup, half of the forest and half of the towns. He tried not to think about it, and eventually closed his eyes until his shift on watch was due.

by Vardaen
Pipkin is working over the fire of the camp, "Tonight my friends we have an apple cobbler. I managed to get a nice bunch of early applies from a friend of mine in Woodland Hall. They are tart and still a bit green, but in a cobbler they should be a delight." He stirs up the mixture in a large cast iron pot that he's set right on the bed of coals. Watching Aerth's smoke rings he smiles, "Not bad, not bad, but you have to purse your lips just a bit more." He wipes the flour off his hands and goes into his pack to get his own pipe now that the cobbler is just sitting to cook. Taking a seat near Aerth he lights his own pipe with a stick from the fire and after a few long draws gets the Pipe Weed burning. "I'm nearly out, this trip is coming just in time." He puffs a few times, and then draws in a long breath and let's out a large smoke ring that hovers before him for a good lone while. "See, like that. Where did you learn to smoke Aerth?"

He has Cooking and Smoking Traits!
All times are UTC
Page 1 of 77