Oderic considers the offer to travel with you, and with few other options he agrees. "I will make my self of use. I am a fine cook."

You finish with Beorn and he finishes with you....

Over the course of the next day you make ready to leave the Beorning lands, and by late after noon you are on your way south once more. The plan is a simple one, travel south along the Anduin once more until you reach Stonyford, then turn east across the vale to Woodland Hall, then south to Woodmen Town and south again to Rhosgobel the home of Radagast. Along the way you can seek out information on the Brown Wizard to find if he is even home, and you can resupply and rest in the various villages. The trip could take three weeks, longer if the weather is bad or trouble arises, but it is your reality.

Before leaving however you seek some information on Pipkin and the Easterly Inn. You do learn the Hobbit was successful in his trade deals and he traveled north to the inn some many days ago laden with supplies for the Brandybucks. This is a good bit of news and makes your leaving a bit brighter.

So then without further delays you are gone from Beorn's hall and are one more marching south through well known territory. The spring weather is what you would expect, rain, wind, cold weather, but as May is giving way the weather improves and for a week now it hasn't rained. Its still cool and windy but by the time you reach the Woodmen lands you hardly notice the colder nights.

Oderic proves to be a decent cook, he's no Pipkin, but he pulls his weight around the cook fire and you are glad to have him. He seems a decent lad too, troubled by his past, but once you leave the Beorning lands behind you his mood perks up and he becomes inquisitive of the lands you are traveling into. He's never been so far from home. He and Tom are becoming close friends, they are both simple young men in the company of elves and dwarves, and they have much more in common with one another than most of you do.

During the trip you realize you are tired of the road, you've been traveling for along time now, up and down the vales, and it is taking it toll on Aerth who has not had a good chance to truly rest from his wounds in the battle. Yet there is more than just the fatigue of the road to worry about.

Late at night when Varuthil is on watch or when she thinks no one is watching she takes out the strange head to study it. At first its just for a few minutes, and she only inspects it physically, but as the trip goes on she spends more and more time 'communing' with it, trying to learn what she can by a force of will almost. When confronted about it she is polite, and understanding, and eventually you talk her into turning it over to someone else to carry because of your concerns that perhaps its starting to affect her in some way. With no desire to be corrupted by some foul item she willingly parts with it, and you can only hope no damage has been done.

Finally twenty three days after leaving the Carrock you are nearing Rhosgobel. Word from the Woodland Hall and Woodmen Town was that the Brown Wizard was at home. Or at least last they knew he was there. Rumors among the Woodmen was he had a guest from over the Misty Mountains and was in council with the man now for several days.

Lure of the Shadow - Varuthil has the Head, and has been studying it a bit too much. She can be seen looking at it late at night, and when she think's others aren't watching. 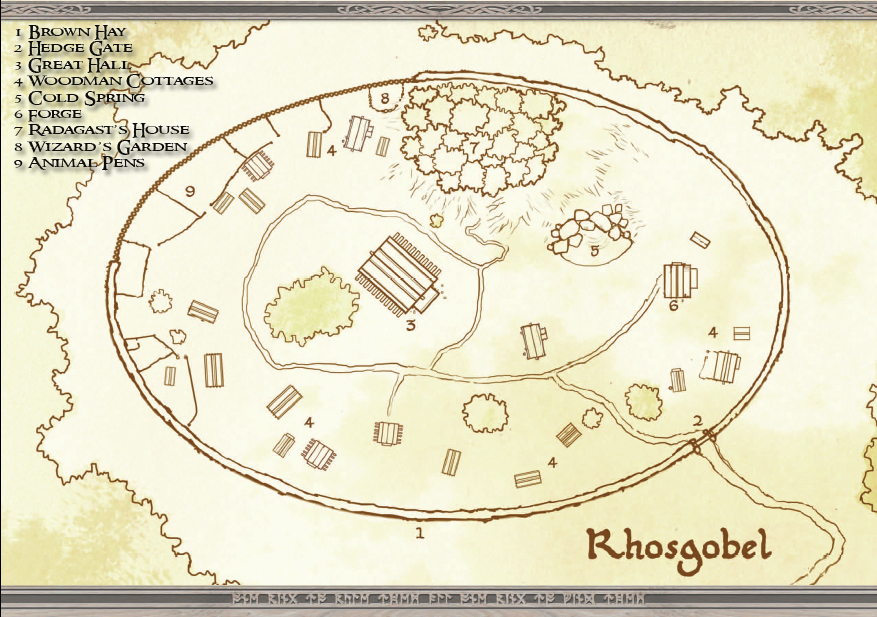 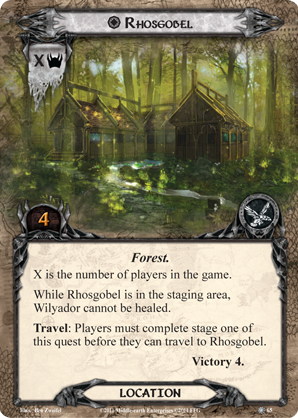 Varuthil was reluctant to part with the head at first, but, when confronted, recognized that her behavior had become a bit odd. As they traveled, she cast glances at whoever she thought was carrying the head, but slowly realized it felt like a weight had been lifted from her shoulders now that it was gone from her care. Now she was even more eager to see what Radagast would say about the hideous object--but wondered if Beorn had not been right that should simply have destroyed it right away.

As they drew near, she said, "If Radagast is in council, he may not want to be surprised. I will see if I can't warn him we are coming--if the local wildlife hasn't already told him." She lifts her voice in song and tries calling one of the local birds to her. When she has done so, she sings to it in Elvish, asking it, "Please bring a message to the Brown Wizard for us. Tell us he has visitors coming--allies, but ones who carry an evil burden." She's not sure how much of that the bird will understand and communicate, but it's worth a try.

Finn is glad to see Oderic and Tom getting along. As they approach Rhosgobel, Finn puts his hand on the former's shoulder. "You know Oderic, the brown Wizard seems like an old man, but he is one of the Wise and powerful of Middle Earth. I do not know much about him yourself, but I wonder if he might have a word of advice for you, as you consider your future."

Finn is glad to finally reach a place rest, and to be nearly rid of that totem, or whatever it might be.
Top

Aerth nods to the elf, agreeing that they should alert the wizard. In regards to the totem, Aerth wants nothing to do with it. "I suggest Wren take it, he's an elf, and they are likely to be less swayed by such evil."

The man moves ahead, scouting the way through Rhosgobel as necessary.
"Kings have no friends, only subjects and enemies."

Varuthil sends forward a few warnings of your approach. The birds can only understand so much, but off they go to warn the the Brown Wizard of your arrival. The last few hours are easy travel, Aerth has little need to scout, and when you reach the gates of Rhosgobel you are greeted by a smiling Woodman lad who is sitting across the gate, his back to the post, the doors behind him are wide open. He is just lounging there. "Greetings!" He waves but makes no effort to move just yet. If you want to enter you'll have to step over him, or get him to move. "Welcome to Rhosgobel."
"He that breaks a thing to find out what it is has left the path of wisdom." - Gandalf
J.R.R. Tolkien, Council of Elrond, The Fellowship of the Ring
Top

Varuthil thinks to herself that Aerth knows little of the history of the elves, especially the Noldor, if he believes such, but keeps her thoughts to herself.

As they approach Rhosbogel, Varuthil asks, "We have to come to speak with Radagast on what we suspect is urgent business. Is he available to speak with us?"
Top

"There's a big, fat spider hanging on its web right above your ear!" Finn exclaims. He pauses a moment to see the lad's reaction, then laughs. "Forgive me, I couldn't help myself and I've surely disturbed what might have been a restful day for you."
Top

Borir isn't a jumping dwarf nor known for his undwarfmanship-like hospitably. He doesn't intend to walk over, but maybe walk on, the lounging man. As he approaches, he clears his throat with a "Hurrmuph."
Top

The young man looks up at Varuthil and is about to answer her when Finn comments about the spider. "What?!" He jumps up and bats and pats at his head for a moment until he realizes it was a joke. "Not funny! Have you ever seen the spiders that live in Mirkwood!" He adjusts his tunic and looks you over, "Yes, Radagast is expecting you. Go on right to his home, he's there, but be warned, he has company, so any more joke like that might not go over well with his guest."
"He that breaks a thing to find out what it is has left the path of wisdom." - Gandalf
J.R.R. Tolkien, Council of Elrond, The Fellowship of the Ring
Top

Varuthil gives Finn one of the glares she usually reserves for Wren's foolish antics. However, she turns her attention back to the boy and says, "Thank you--including for the warning," and then starts forward, preparing to knock on Radagast's door.
Top
Locked
518 posts