Finn takes Tom to the side. "Hmm. Where do you plan to go, and with whom? You are a Breelander...do you think to return there? Or the Easterly Inn? Or elsewhere? I do release you, but not yet. Not until I know how you intend to safely get where you intend. It may be wiser to remain with us a short while longer, until my road brings you to where you wish to go."
Top

Tom rubs his face, "I think a few months at the Inn will do me good. Traveling with you while you battle goblins is one thing, that... that shadow was another." He nods, "I'm not going to abandon you now, out here, all alone, but I need a break from the trials Finnulf." He does seem to be beat up more than any of you after what transpired.
"He that breaks a thing to find out what it is has left the path of wisdom." - Gandalf
J.R.R. Tolkien, Council of Elrond, The Fellowship of the Ring
Top

"Good. Then we can part ways after crossing the Old Ford. The Inn is a good place, and you should manage fine traveling on your own through Beorn's lands."
Top

Rathar chimes in. "Yes. If that inn is anything like where you come from, it is the best place for you."
Top

The camp is finally broken down once Aerth is lost to sight. You begin the long march east down the mountains heading for the Beorning settlements around the Old Ford. The land is silent as you go, the orcs and goblins have all fled, and the Shadow now defeated has moved off south. It leaves the land with a sleepy feel to it, the birds and beasts have not yet come back, but they will.

You head east, down hill, out of the mountains and foothills. It is several days to the ford from here. On the eve of the first night Varuthil points north and you see a great eagle circling high above the land. It circles there for a time before moving back east to its eyrie in the mountains.

By late on the third day of travel on the old road you come to the Old Ford. Tom comments, "We can recover the boats that Dindy lent us, if they are still here, and return them to the fine hobbit." You come to the west bank of the ford and look out over the great river. Irime's words in your first coming here with her rise up like a memory: She describes how a great bridge built by the Dwarves once spanned the river, and how it was made even greater by the men of lost Arnor. Great armies rode across that bridge, and she remembers the ice-spear of her kinsman Gil-Galad glittering in the sunlight. But he rode away into shadow. The bridge is gone now, leaving only a few stones worn smooth by the water, among which rest the fragments of a broken statue of a forgotten king.

A dozen Beorning farmsteads, including Gelvira’s Hall of the Crossing, are scattered within twenty miles of the ford, mainly to the north of the Road. This community is used to the passing of wanderers and traders, and thus welcomes adventurers with more warmth than the average Beorning settlement. Chief among them is the Hall of the Crossing, Gelvira's place where you have stayed before. You plunge into the icy autumn waters and cross to the east bank. As you near the Hall the dog in the yard starts to bark and out from the door comes Rathar, Gelvira's husband. He holds a saw in one hand, and a fresh cut board in the other.

Gazing out at you int he gathering evening light he smiles, "Hail and well met travelers. Welcome back! How was your trip into the High Pass? I see you come with a fair fewer elves in your company. I hope all went well with your task. Come, come, the stew is hot and the ale is cold inside the Hall!"

October 7th
Gelvira Pot-stirrer & Husband Rathar: The farmstead of Gelvira Pot-Stirrer is the closest to the Old Ford, and so many travellers spend the night under her roof. She has a huge bubbling stew-pot over a fire that never goes out; she keeps topping up the pot with more meat and vegetables and herbs whenever it runs low. Her guest-hall can sleep more than a score of travellers, and it is full some nights. Her husband brews beer and mead for their guests, and her daughters are acclaimed bakers. Many adventures begin with chance-meetings at the Hall of the Crossing.

Gelvira's position means she knows every regular traveller on the roads of Wilderland. She hears every rumour, and meets regularly with Beorn to bring him news of potential trouble. He considers her to be one of his most valuable advisors, and listens closely to her counsel.

Note: Don't confuse Rathar the NPC with Rathar the PC. Shipwreck joined us after you first met Gelvira's husband 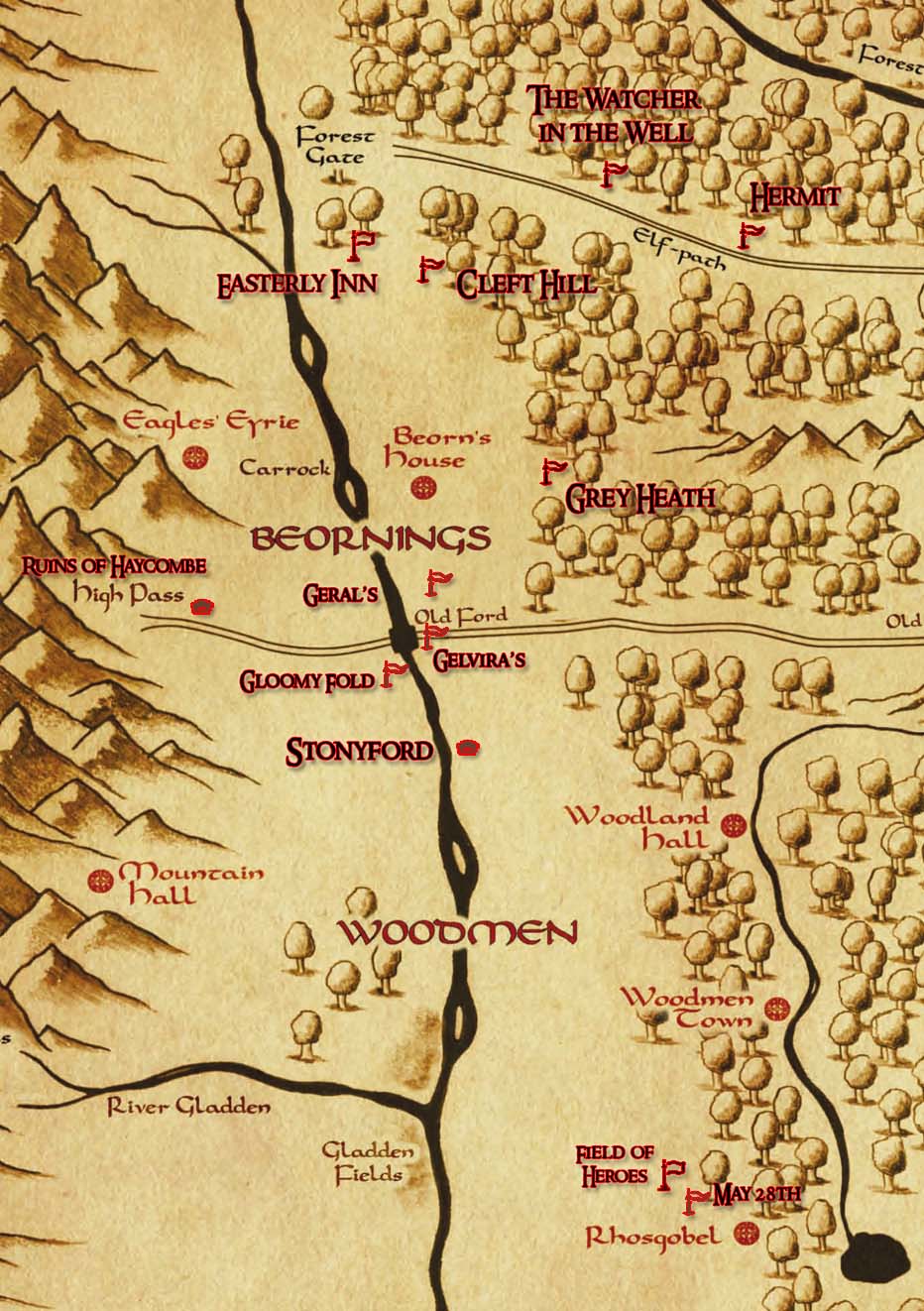 "Hmm," Pipkin says, his hand involuntarily going to his hitched belt. "Hot stew and cold ale. That's just what a body needs right now." He smiles at Rathar. "We'll tell you the whole story once we're inside and properly fed," he says. He's leaving nothing to chance and trying to nip in the bud any effort to tell their tale before dinner is served.
Top

Posts: 9634
Location: The Secret Places Beneath the Earth
Title: Keeper of the Hidden Word

Varuthil nods at Rathar the Beorning and says, "Well, met indeed. We accomplished our task and the elves we are missing willingly went their own way. What we experienced on the way--the servants of the Shadow move across the land again. Everyone should be wary, even more so than usual."
Top

Pipkin pushes for dinner first, before tales, but Varuthil answers some questions now as Rathar the Beorning motions you in. "Well its good to hear your companions left willingly. This talk of shadows should not be done out here. A full belly, a good fire, and your feet up is a better way to tell tales I must agree." He turns and leads you into the hall where the fire burns in the middle of the wooden pillared hall. The smell of good food fills the air. "I'll get an ale for each of you. Sit, leave your burdens on the floor."
"He that breaks a thing to find out what it is has left the path of wisdom." - Gandalf
J.R.R. Tolkien, Council of Elrond, The Fellowship of the Ring
Top

Borir smiles at Pipkin's words. The hobbit had a way of speaking the dwarf's thoughts, especially concerning food and ale. Borir shuffles fast after Pipkin hoping to get into dinner and drinks.

Once inside, Borir smiles and thanks Rathar for fetching the group some ale, "Aye, thank you. My lips haven't tasted mead in a while."
Top

Finn nods at Rathar and says, "Thank you." He is unusually quiet, but the soft smile on his face shows how pleased he is to find a place of food and drink, and rest. He takes a glass of ale and sits, stroking the soft fur of one of the hounds who, whether she belongs to Gelvira and Rathar or is a regular visitor herself, Finn doesn't know.
Top
Locked
707 posts