The trip from Mountain Hall to Rhosgobel is long...

...80 Miles from Mountain Hall to the Great River: across pathless areas and hills in the borderlands taking you six days to cross. You reach Stonyford and spend a day resting and learning of rumors of the area. Seems orcs were spotted not far to the south, and all the animals in the area are alert and on edge. In mid summer the ford is easily crossed here and you turn south.

...50 Miles from Stonyford to Woodland Hall over open terrain taking three more days as Mirkwood comes into view. Its here out on the open fields that Black Wing finally makes his return. He complains that Borir moves around too much and scolds the dwarf for making it so hard to find him. He's been to every roost of men in the region looking for him. He brings word that Radagast awaits the Fellowship in Rhosgobel. You rest in Woodland Hall and tell the Chief there some of what has happened on your trip so his people are prepared for new dangers from the south.

...80 Miles from the Great River to Rhosgobel along the Woodman roads through Mirkwood. Stopping once at Woodman Town for food and drink, a few good songs, and smiles from friends. But you linger there longer than perhaps you should and you leave reluctantly and continue to Rhosgobel. Taking a week on this leg of the journey.


So it is August 16th (18 days since leaving Mountain Hall) when you finally reach the home of the Brown Wizard once more.... 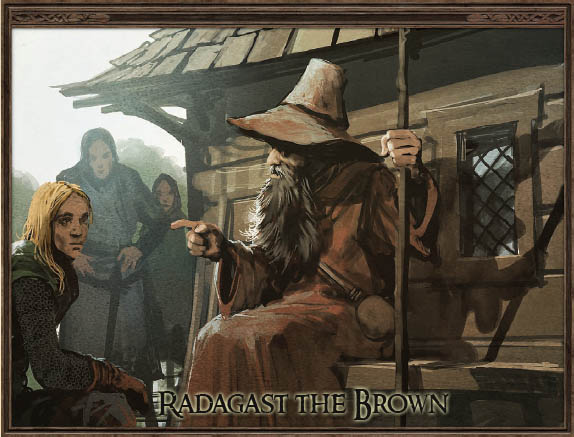 Finn nods at Glirion and Gerwald's replies.
"Well, he seemed like a decent fellow. I'm sure his presence will be missed."
As if to answer his own question about Varuthil, Borir, and himself, Finn adds, "It seems the three of us have become errand runners for Radagast. I suppose you now, as well," he adds with a laugh, "But I don't mind; we've seen to the end of a few troubles here in the Vale, but this time it feels a bit over my head. The Dwimerhorn and the Chain and all that... I hope the Wizard can take it from here."

While they are very familiar with Rhosgobel, the sense of mystery always seems fresh to Finn. He decided to let others tell the tale to Radagast first. In fact, Glirion and Varuthil were the ones who saw the most, so he expected they'd have the most to say.
Top

Glirion laughs. "Then you know little of wizards if you think to pawn our troubles off on one and go about our own business."
Top

Varuthil says, "I have no illusions of being able to pawn off our problems on Radagast--but we will be better able to deal with them if we consult with him. First we must see if he is here." She asks some of the residents of Rhosbogel if Radagast is currently home and, if not, when he might return.
Top

Radagast the Brown has dwelt here for many years. The name Rhosgobel means Brown Hay or Hedge, referring to the thorny barrier that protects the village from the evils of the forest, and that makes Rhosgobel one of the safer settlements in Mirkwood even when the wizard is not at home.

Radagast is something between an eccentric old great uncle and a living god to the people of Rhosgobel. Most of the time, the wizard is just another old man snoozing in the sun or telling stories of the old days, but everyone in Rhosgobel has seen him performing little magic tricks or healing sick children. Sometimes, though, Radagast puts forth his power, and reminds the Woodmen that he is a wizard of great potency. All of the Woodmen are utterly devoted to him and would do anything for him.

You come to the Brown Hay. This tall hedge surrounds Rhosgobel on three sides. On the fourth side, facing west, the Woodmen built earthen banks and walls of wooden stakes to defend themselves against attack. The hedge bristles with thorns and stinging weeds, and is strong enough to entangle the biggest, nastiest boar or even a Troll so they say. As the Orcs of Dol Guldur discovered on past raids, the hedge is also too wet to burn easily, even in the height of summer.

The only gap in the hedge is a little door, the Hedge-Gate, carved with the image of a grinning face. Radagast made the door himself, and placed a great deal of his magic into it. If any enemy touches the door, it shrieks a warning. Some Woodmen insist that the door has been known to quietly eat smaller Spiders and other trespassers!

You arrive in Rhosgobel and see some friendly and familiar faces of the Woodmen who live and work here. Beren, one of the men you've come to know as the Wizard's Man, points you to the far end, "He's home, and expecting you. You best hurry, he's in one of those moods, might go wandering off at the drop of a feather. All caught up in things going on down at the Black Tarn." He calls out after you go a bit, "Come back later for a drink if you like."

You come before Radagast's house. Well, usually. Radagast's house is almost as elusive as the Wizard himself. If Radagast wishes to be found, then his house is here in this grove of trees at the end of a little twisty path of crushed white stone. If the Wizard is away or wishes privacy, then there is no house to be found. Radagast's cottage looks like an explosion in a mathom-house that was then colonised by woodland creatures. Squirrels and field mice scurry through piles of books and scrolls, and crows perch on rafters from which cloaks, weapons and gardening tools hang.

Today his house is present and so is the Brown Wizard. He is coming out of the house with a bundle of gardening tool and a few empty sacks. He comes from the front door as it swings closed behind him and he looks up at you with a start as if not noticing you till the very last moment. "Well! Finally you have come, long have I waiting to hear your tale." He drops all his tools right then and there, "Come in come in, let's have at it!" 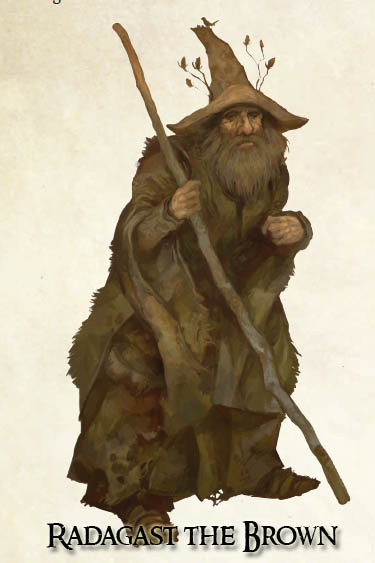 Her voice carefully neutral, Varuthil says, "We came as swiftly as we could." She gestures to the group. "We have two new companions with us, Glirion of Lothlorien and Gerwald of the Beornings." She will let them make any further introductions that they want to.

Once they are settled in, Varuthil says to Radagast, "It is as you feared--there is great evil afoot at the Dwimmerhorn. Orcs and Easterlings gather there and they have enslaved many Woodmen, holding them captive." Shaking her head in frustration, she continues. "We weren't able to free the slaves--indeed, we barely escaped ourselves. But there is something much more fell at work there. They had some sort of basilica, the very stone of which was corrupt, and in the basilica was a coffin. But the coffin's inhabitant was not laying in the rest of the dead. He was some sort of undead being. I heard the leaders of the orcs and Easterlings speak with this undead monstrosity and they spoke of something, or maybe someone, called the Chain. I was not able to tell what it was from their conversation, but it is apparently something of great power they hope to use as a weapon against the Free Peoples. However, they were planning to wait longer to use it because it was not yet at full power. But they found us there and they may now act before they are ready--some orcs broke into Mountain Hall after we had returned there to speak with the chieftain Harfast." She shrugs and says, "I do not know if that is a good thing or a bad thing." She looks to the others to see if they have anything to add.
Top

"Varuthil has said it all," replies Finn, "that I can remember. I feel most for the captives held there. Perhaps we can go to break them out some day, with more support and resources. The Woodmen might surely rally around such an effort. But yes, the undead being, and that chain... when we found those I knew why you had sent us to investigate.

We successfully aided the Woodmen in destroying the orcs who attacked Mountain Hall, and while things are quiet, they are on the alert and expect further attacks in the coming days."
Top

Borir silently nods in agreement with Varuthil and Finn's statements about recent events. The dwarf allows the taller folk to the talking as he takes the time to finally catch his breath from the last few weeks.
Top

"Glirion of Lothlorien indeed," the elf confirms Varuthil's introduction and bows gracefully. "I greet you in my Lady's name. I was traveling with two companions on an errand and a chance meeting brought all of us together. I am at your service while the immediate threat remains."
Top

‘And I as well, sir. Gerwald of the Beornings as has already been stated. I am at your service.”
Top
Locked
708 posts