It was in the beginning of the reign of Malvegil of Arthedain that evil came to Arnor. For at that time the realm of Angmar arose in the North beyond the Ettenmoors. Its lands lay on both sides of the Mountains, and there were gathered many evil men, and Orcs, and other fell creatures. The lord of that land was known as the Witch-king, but it was not known until later that he was indeed the chief of the Ringwraiths, who came north with the purpose of destroying the Dúnedain in Arnor, seeing hope in their disunion, while Gondor was strong.

Ruins of the North is a game set in the north of Eriador in the ruins of Arnor between the years of The Hobbit and Lord of the Rings. Using the One Ring RPG system the game will explore the legacy of the Dunedain and the dangers returned to that part of Middle-earth.

‘We have come too far to the north,’ he said, ‘and we must find some way to turn back southwards again. If we keep on as we are going we shall get up into the Ettendales far north of Rivendell. That is Trollcountry, and little known to me.’
April 30th, Two Days Since the Barrow and the Breaking of the Fellowship
A long spur juts out of the western Misty Mountains, far into the north. For a hundred miles its slopes spread out and curve northward, as if to point to the ruins of accursed Angmar where the Witch-king once dwelt. The tallest, most jagged, most threatening peak in this spur is Mount Gram, a horn of rock rising from the slopes of other mountains as if they collapsed under its weight. Thousands of years ago it was delved and fortified by Dwarves, but it is now a home to monsters in a blighted land.

Deep beneath its roots is a Goblin fastness, a complex maze of a thousand holes and pits. For centuries, the Orcs of the Misty Mountains inhabiting Mount Gram have bitterly fought against the Rangers guarding the regions to the west of the Ettenmoors, the Coldfells and Trollshaws, and against the guardians of the hidden sanctuary of Imladris. Out of its gates issued the invading army that was defeated centuries ago at the Battle of Greenfields, when a Hobbit muster led by Bandobras Took, the Bullroarer, routed the Goblin horde of King Golfimbul.

For two days you have been struggling among the foothills of the Misty Mountains. Your pace has been slower than normal, as the weight of loosing Nimroyn and Perrie both has slowed you. You have wandered north and west slightly considering your options. A great spur of the mountains races west, directly in your path, and you have had more than one conversation about the best way to go. Do you seek a pass over the mountains north, or do you go west around it, near to Mt. Gram and the dangers of that place. It is a gloomy day as you march forward, and a cold mist gradually descends from the mountains spreading forth like probing, ghostly fingers across the ground. A head a lightly wooded hill offers a chance to take stock of your surrounding above the fog.

You climb the hill easily to find a barren patch of ground in the shape of an imperfect circle. The rock and dirt are a smoky grey, as if an intense fire had burned there in ages past. 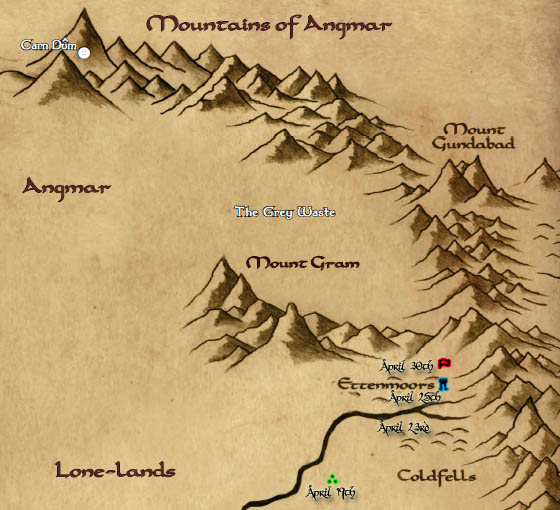 Welcome back to the next chapter. We have no officially started the Ruins of the North book! Only took 3 Years and 1 Month
"He that breaks a thing to find out what it is has left the path of wisdom." - Gandalf
J.R.R. Tolkien, Council of Elrond, The Fellowship of the Ring
Top

Halleth inspects the camp site to see who might have occupied it long ago, his curiosity about all such ruins driving him.

"Passing by Mount Gram does not come without dangers," replies Telurin. "Orcs roam the area; but either way is fraught with peril. Through the Mountains should be faster, but it could be slower, if the weather turns and we get stuck.

We passed by the western side of Mount Gram on our first journey to Carn Dum. We have been that way before. I say we go there, but I am willing to do either."

The Elf looks at their halfling companions, "What say you Hartley, Hugo? Shall we brave the cold passes or the Orc patrols?"
Top

Hugo giggles out, "What, no way to have Orcs AND cold mountains? I've seen neither and cannot tell which is more perilous! Which is better, speed or stealth? I'm all for what gets us there best, but if pressed to choose I'd say the high passes. It is only just spring, can they be dangerous with the Sun shining? I know not."
Top

"I trust Halleth. There is no safe way and the road is long on either path. Let us go west around Mount Gram. Our group is not large and I will do better relying on stealth than on my strength to forge a mountain path," Hartley says.
Top

The debate, if you could call it that, is going on as Halleth inspects the burn ring. Its not a camp, its not a camp fire ring, but the entire top of the hill, from edge to edge almost. Long ago something was here, and the scars of its burning still mark the place -- what however Halleth can only guess at.
Halleth Lore - Rolled:
Feat Die: 2*
Success Die: 1,3
Totaling: 6 = Failure
As you have decided to take the long road west around the spur of the mountain you hear the howl of hounds. The baying and barking grows louder until suddenly a pair of savage wolfdogs come bounding over a high wall of earth near the base of the hill in the distance. They pause on spotting you, snarling and barking loudly and with vigor. They are large beasts, with a wolf-like appearance.

Telurin your look-out man, is taken by surprise, and before he can rally you to action, the two large hound turn and bound back down the hill baying and howling as they go, drawing attention to anyone within ear shot of their loud yowels.
Look-Out Telurin: Awareness
Rolled:
Feat Die: 1*
Success Die: 4,5,2
Totaling: 12 = Fail
"He that breaks a thing to find out what it is has left the path of wisdom." - Gandalf
J.R.R. Tolkien, Council of Elrond, The Fellowship of the Ring
Top

"Well," says Halleth, "it looks like we will get a foretaste of some of that danger."

Are the hounds within bow range?
Top

Telurin is busy inspecting the fire-ring, thinking of the lore he's heard in the Hall of Fire of places like this, when he hears the barking of hounds.

Lore
"Ah, I have failed to keep my eyes open. And now they will return and our scent will lead them to us, no matter how far we are when we return. Do we try to get as far as we can, find a place to hide, or simply wait to see who returns here with the hounds?"
Top

The hounds bound back into the brush and tree cover below the hill before the company can get bows out or shoot. Had your Look-out man been more alert, you may have had time to fire on them. Now, you fear that Telurin is right about your options.
"He that breaks a thing to find out what it is has left the path of wisdom." - Gandalf
J.R.R. Tolkien, Council of Elrond, The Fellowship of the Ring
Top

Halleth looks around critically. "This, at least, is a defensible spot. We don't know the local terrain--the best route to flee or where to hide--but it's likely that the master of those hounds does. We may be safest staying put. We might be able to flee safely if we had some way of throwing the hounds from our scent, but we would need to find a stream or the like to do so."
Top
Post Reply
442 posts

Return to “Ruins of the North”