“...in the Riddermark of Rohan the Rohirrim, the Horse-lords, dwell, and there are no horses like those that are bred in that great vale between the Misty Mountains and the White.” - From The Lord of the Rings, by J.R.R. Tolkien

Run by the Loremaster WBWeather

Chapter One: Blood on the Snow 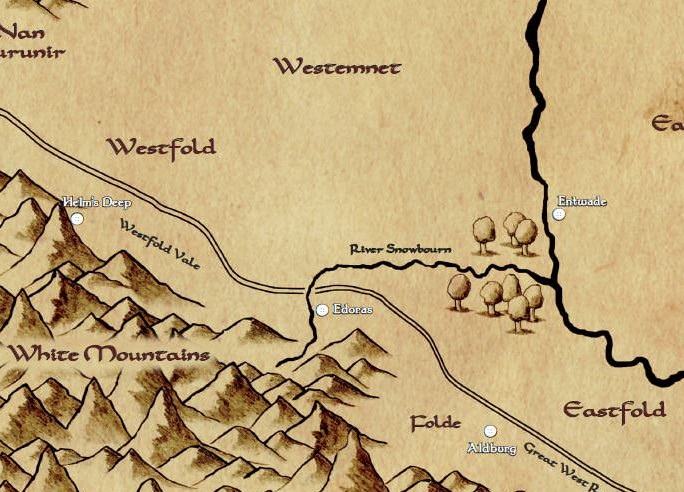 Edoras, seat of the First Marshall of the Riddermark, King of the Rohirrim. The Golden Hall, Meduseld, glistens in the sunlight, dazzling in the sun high atop a green hill at the feet of the White Mountains.

The white waters of the Snowbourn run swiftly at the foot of the walled hill, and a shallow ford crosses the stream where the great West Road traverses it. Beyond the ford, a wide rutted track weaves past lines of great grassy mounds on either side – the barrows of kings, thick with white flowers – up to the gates where many spearmen stand guard.

Some of you have been here before, for others, this is your first glimpse of the Rohan's gleaming capital city. It is a sight that stirs all hearts alike.

You recall the day the messenger from the king rode to your home. You can remember the sealed letter signed by King Thengel himself. In your mind, you recall the words:

"...for your great acts of valour in the service of our people, King Thengel thanks you and bids you come and lend your service once again. Great is our need in times such as these for men and women of courage on honor to aid our people in the defense of our land."

The letter had gone on say how Thengel was looking for men and women of the Mark who had demonstrated bravery and skill beyond the norm. He wished to honor a handful of such heroes and task them, if they should be willing, with a task of some importance.

Preparations had been made and farewells had been said as the day approached. Now finally you were here, at the gates of Edoras on a crisp day late in February in the year 2960. The Capital seems to be in a state of excitement with groups of armed men and women marching with purpose here and there about the city, while other groups regularly seem to be headed off eastward.

Introducing yourself and presenting your summons from the king, the guards had looked at you with a combination of suspicion and awe as if judging to see if you measured up to the honor of the king's regard. After a brief delay, you had been escorted upward toward the top of the hill by means of a winding road, lined by various wooden buildings, some homes, others businesses and shops, until finally you arrived at a group of small but well furnished rooms one for the men and one for the women. Your horse was taken away to be cared for in the king's stables.

"Wait here until summoned to meet with the Reeve. He speaks on behalf of the King when his Lordship is away. Please relax yourself while you wait. Rest if you so desire. Food will be served and you may wash away the dirt from the road. Feel free to explore the city, but be ready to be summoned ere nightfall," he says and then leaves you with a bow.

You have a few hours left until sundown. You cannot help to notice others who like you seem to have been summoned by the king. Several are now filling the bunks around you. Perhaps you will take advantage of this time to talk with some of the others or explore the city and see what is going on. Welcome to the Oaths of the Riddermark! Let the game begin! Feel free to interact a bit with each other and explore the city a bit. You have some time to talk with some of the locals. Mostly I want to give everyone a chance to check in and introduce their character. Perhaps you can share if your character has been to Edoras before, talk about where you are from, share some of your motivations and goals as well as what your character might be feeling.
Top

Though nearly old enough to be the father of most of the spear-men and guards he greets, Sangric approaches the gates of Edoras, and passes up the path towards the Golden Hall, with eyes bright with wonder, as a child. He'd been here before, once, and at the invitation of King Thengel himself, but only briefly, and he had little opportunity to explore. But even if his eyes found the gleam of Meduseld in the sunshine a thousand times, they would be bright every time.

Sangric was one of the few of the Riders of Rohan who knew his letters, a skill he had picked up in the pursuit of song and ancient tales. Most of those of the Eorlingas were told one to another, not written down, but in his many years he'd found a few worth reading, even if only off the engravings on memorials and banners. When a rider found him with a letter, he'd thought that it was simply his duty to read it to the person it was sent to, as he'd done often during his travels through the Mark. Even after reading it, he'd wondered if it were misaddressed. But as he was not far from Edoras at the time, telling tales for his supper in a small collection of crofts near the Entwash, he'd set out and arrived the very next day at the gates.

Once his meager possessions are settled on one of the lower bunks near the fireplace, Sangric sets his harp on his lap and practices some strumming, waiting for others to arrive. For the words of the guard who'd brought him here made clear that he was not the only one called.
Join our Discord chat for TOR and AiME: https://discord.me/theonering
Top

Théofred walks into the bunkhouse after making sure the stable boys took good care of Arfeax. She was a good horse, and he made sure to give her a carrot for her efforts along the road from the Wold. This was his first time being in the Capital, for the Wold is the frontier of Rohan a wild place of few settlements however small they are. Edroas is a place of wonder and the people here seemed to busy themselves in the market square. More people in one place than he had seen in his entire life, save for the Toft perhaps. But the capital has a different feel, the people are less foul, and more joyful. He quickly fell into pace as he removed his helm and armour near his bedside, and took up the offer for a bath. A warm bath after the cold road here would do him good.

After bathing and getting fresh clothes, his finest clothes for the meeting with the Reeve he requested a strong Ale to pass the time. A bard of some 30 years sat in the common room strumming his harp. "Good day sir, may I be so bold as to guess your purpose in the capital this day?"
Top

“Would that I knew!” Sangric answers, in light spirits. “I received a summons but for what purpose needs must wait to be learned. The guards spoke of more to com, so may I assume you, also, were called?”
Join our Discord chat for TOR and AiME: https://discord.me/theonering
Top

"So I guess correctly," he slides a mug towards his new companion. "Would you like an ale perhaps, I ave a question. Have you been to the capital before?"
Top

"Well met, friends!" A young woman, perhaps in her mid-twenties, walks through the door. Standing a few inches shy of six feet, she is clearly Gondorian with grey eyes, dark auburn hair, and a proud, sun-kissed face pulled into a cheerful smile. She wears road-dusted traveling clothes, over which is a leather corslet. A longsword belted to her hip and a bow paired with a quiver full of arrows complements the outfit along with a pack and a satchel.

"Don't mind me!" she says, as she makes her way through the room, plopping her gear down on an empty bunk in the corner. "Hmm. If this is where we're to stay, I'll have to request a dressing screen," she adds, as if to herself. "But no matter for now!"

Finally free of her burdens, she steps back to the center of the room and looks its other occupants up and down. "Well met, I say again. I am Istril of Pelargir."
Top

Sangric is about to introduce himself to Théofred and graciously accept an ale, when he's drawn up short by the arrival of what he at first takes for a shield-maiden. Silently he watches her finding a bunk, setting his harp aside, next to the drum that sits by the foot of his cot. "I did not think to meet someone from so far, let alone a shield-maiden of Gondor. I hope you might care to share some tales and songs of your home! I have heard only very little of Pelargir, or even of the Sea, which the songs say stretches farther before the eye than even the plains of the Wold. I am Sangric, son of Sangifu, and I would tell you the name of my friend here, but we have only just met!" Keeping his distance, he nevertheless bows in the woman's direction.
Join our Discord chat for TOR and AiME: https://discord.me/theonering
Top

As you are talking the guard who escorted you all here steps into the room. "My mistake madame, but there are separate quarters for the shield-maidens next door. I may not have communicated clearly enough. Allow me to take your belongings there for you while you continue your conversation."

He looks at the group momentarily, then at Istril specifically. "That is if you do not mind, my lady. Also, if there is anything else any of you require, please let me know and I will see what can be done."
Top

"Oh! Oh, that is well then." She smiled at the guard and made room for him to pass by and move her belongings. "Thank you so very much. I would not like to be the cause of any awkwardness, though I have seen it all, I assure you. I am a healer by trade, you see. Nothing so prestigious as a warrior, but I help as I can. I do think I should like a bath, if that might be arranged. Oh, and do be careful with the smaller satchel. It has a number of delicate plants and cordials and the like that, while I think I packed them all well, do not do well under rough treatment."
Top

"I shall see that no harm comes to any of your things, ma'am." As gingerly as he can, the guard lifts the bags and walks to the door. "I shall have a bath drawn up for you presently."
Top
Post Reply
388 posts

Return to “Oaths of the Riddermark”