Everyone around can't find any significance to the circles, either in the previous conference room or here. Aurelia understands the power of circles in conjuring and control, but these don't have the focus or completion needed to act in that function. Strange.

Moving east, lines of shelves run from north to south in the square room. Glass windows — some with handles and others bearing locks — cover the front of the shelves. Dozens of objects line the shelves, resting on satin pillows behind the protective glass covers. A door exits from each of the four walls. This chamber houses numerous antiquities, most claimed from lands conquered or visited by the Armies of Exploration—orc scarificators, Kellid war drums, a ceremonial Brevan scabbard—all broken and faded from time. The items stored include dwarven mining equipment, a stone-and-gem chunk from an elven aiudara gateway, the bone totem of an Isgeri shaman, and even an inert technological gadget from distant Numeria.

Going towards the Artifact room seen earlier through the glass panels of the door, worrisome traps are cautiously looked for. Theodrix checks the door leading in for trouble and doesn't find anything. Confident, he opens the door and heads in. Right before his foot touches the ground, a squeal sounds behind him and he is unexpectedly pulled backwards. The little halfling servant, Imistos, has done the pulling. He points with a shaky finger at the floor. The tile leading in is slightly raised versus the rest of the floor in the room, a clear sign of trouble.

Once his eyes see it, Theodrix has no problem taking out his tools and breaking apart the trigger. Electricity arcs along the floor of the Artifact room as the trap discharges harmlessly before they enter. The servant breathes a heavy sigh of relief as his rescuers didn't turn in to sizzling barbeque.

Within the shelves are assorted cultural trophies worth a good deal. There is also a striking figurine of a Silver Raven taking off from a perch. It all gets looted easily enough.

Loot worth about 500gp, so I added 100gp to everyone's character sheets.

Figurine of Wondrous Power (Silver Raven): https://www.d20pfsrd.com/magic-items/wo ... ous-power/ (up for grabs!)
Rule Number 12: "A soft answer turneth away wrath. Once wrath is looking the other way, shoot it in the head."
Top

"Nobleman's plaything" Meructio shrugs at the raven. "I say we sell it to some gentleman with more gold than sense."
Top

"Thank you Imistos! I owe you one." He doesn't even joke about how the halfling, being so short, had a better view of the floor. He collects a few rare items, smaller lighter objects worth a few gold. "Could prove useful at sea, or in the wild, we should consider its use among our group." He searches for signs of the slime, careful to not step in that also. Once the chamber is properly looted he considers the doors.

"Too many options. East." He presses east again, going through his process to check the door before opening it.
"He that breaks a thing to find out what it is has left the path of wisdom." - Gandalf
J.R.R. Tolkien, Council of Elrond, The Fellowship of the Ring
Top

"I agree; the item may be useful. East it is then!"
Top

Imistos looks bashful at the thanks, his expression showing his pleasure at ingratiating himself with the nobility he has found himself lost with.

In the next room, a fearsome winged beast poses ferociously in the southeastern corner of this square room. Two wolves stand in similar poses in the northern corners, while an immense coiled serpent poises itself in the southwestern corner, ready to strike. A small elephant stands in the center of the room, its head drooping far too low, and the top of its neck torn open. Thick cords of rope hoist avian creatures of every size along the ceiling, with an impressive eagle taking up the most space above. A doors exits to the north.

After several seconds wandering around, the wolves animate! They rise on clicking mechanisms, their bodies straining to stand on two legs. During this movement, their bodies strain to stand on two legs. During this movement, however, one of the wolves' hind legs collapses, while the fur on the other wolf's back splits open, rendering them both inert. Following this horrific display, the griffin hoisted from the ceiling animates as well, its wings beginning to beat before one tears off completely and the mechanically-animated taxidermied creature falls to the floor, one of its front feet tearing off as it crashes into elephant figure below.

But this one does not stay still! Whatever power impelling it is still active, and whatever programming it has is somehow hostile. Part of the metal frame has burst through its skin but it still has some fight left in it. Before anyone can react, its remaining paw slams down towards Theodrix's head! Caught flat-footed, the warrior still has enough presence of mind to duck next to the ruins of the elephant, blocking the blow. 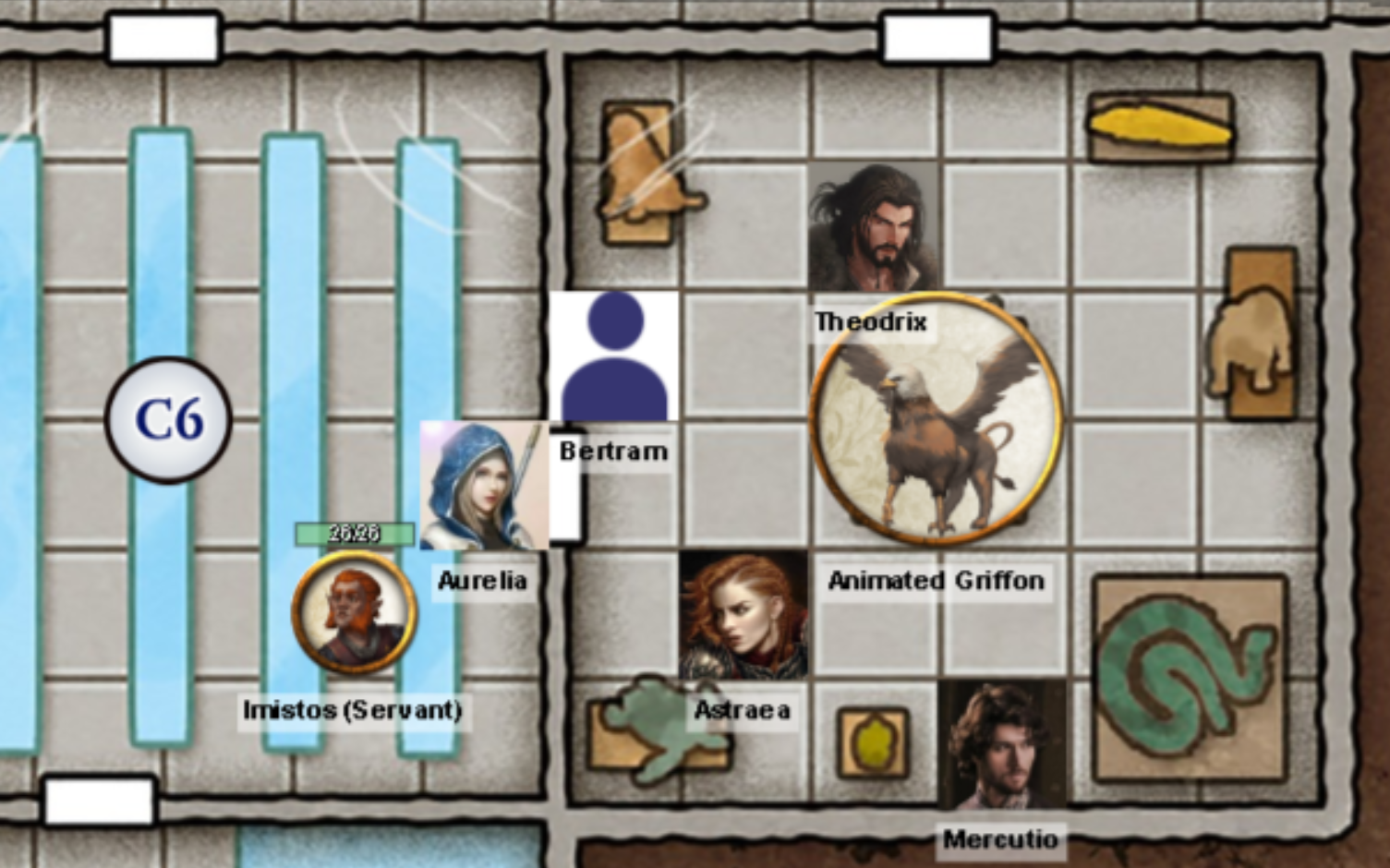 Added the Figurine of Wondrous Power to Theodrix's sheet.

Anyways, the rest of you can go. *grumble grumble*
Rule Number 12: "A soft answer turneth away wrath. Once wrath is looking the other way, shoot it in the head."
Top

Drawing her blade and eschewing her shield for the moment, Astraea strikes out at the animated creature.

Mercutio begins shouting out the magic of his voice.

Brother Betram whispers "Caiden be with me!" and steps forward to attack the griffon with a two-handed overhead strike with his quarterstaff.
Top

"Wind in the Sails!"

Theodrix tumbles clear of the attack with a shout of surprise as he's attacked. He recovers his wits after avoiding the strange taxidermy animated griffon. He draws his long blade, and then yanks out the magical hand axe with his off hand. Holding blade and axe before him, one running up his fore arm, the other more traditionally, he lays into the bird beast with both weapons.

5ft E (flank with Astraea )
Draw Longsword and Handaxe +1
Two Weapon Fighting
Longsword +5(flank)/1d8+2
Axe +5(flank) /1d6+2 (magic)
"He that breaks a thing to find out what it is has left the path of wisdom." - Gandalf
J.R.R. Tolkien, Council of Elrond, The Fellowship of the Ring
Top

Aurelia backs away from the door, pushing Imistos back out of the way of danger as the Animated Griffon tries to tear apart the storage room. She begins arcane intonations of cursing, then unleashes the spell against the taxidermy abomination. The spell matrix doesn't seem to even cause the thing to hesitate.

Mercutio has had, well, no reason to show off his musical lore in the Senate or down here in the catacombs. But with a literally overpowering threat he begins reciting a Ballad of courageous action, the sound of his voice bolstering the minds and souls of those around him.

The warpriest specializes in combat at range, but is absolutely no slouch in the art of the sword. In one smooth motion she draws her bastard sword, and using her hips and shoulders in unison slashes it across the legs of the animated creature. She lands a solid hit, tearing up the stiffened skin and digging in to the metal-reinforces structure underneath.

Brother Bertram isn't about to be shown up, even though his quarterstaff is half dignified walking stick, only half weapon ... or so some people think. He deftly steps forward lifting the quarterstaff, then drives it into an arc right into the dead face of the Griffon, crushing in one side of its skull.

Theodrix moves last, thinking tactically by setting himself up to synergize with Astraea in surrounding the thing. Having no reason to hold back in genteel company, he becomes a whirling dervish or sword and ax, slashing and hacking in swift succession at your enemy. Both his weapons tear gaping holes in its torso, exposing and tearing away the metal mesh interior.

But despite the concerted attacks and successful scoring of its flesh, the Griffon is not alive. It feels no pain, and is thus unencumbered by the damage taken. However, it can recognize gradations of threat and so turns on Theodrix, counter-attacking with its gaping maw and remaining good claw. The bone jaws close on his shoulder, pinning him in place while the claws rip through his belly, blood splattering onto the ground. The warrior staggers in place, almost mortally wounded by the attention of the faulty construct. Another attack like that and he won't just faint from blood loss, he'll be dismembered!

Acting for Aurelia: Griffon counts as a Construct, so immune to mind-affecting spells. Spell had no effect.

Griffon: -31 HP
Theodrix: 0 HP (exactly on the dot), Disabled Condition
- Staggered (only 1 Move/Standard action per turn)
- Move Action has no adverse effect, a Standard Action (or other strenuous action) will deal 1 HP of Damage and then Theodrix will be unconscious and Dying.

Tactical Insight: Almost all your attacks easily hit. You can likely afford Power Attack penalties if you want to try to increase your damage output.
Rule Number 12: "A soft answer turneth away wrath. Once wrath is looking the other way, shoot it in the head."
Top
Post Reply
185 posts