"Good thinking," Janos commends the Padawan. "You know the area much better than I, so why don't you take point here. Do we leave Wile flying and shooting while we cut them off?"
Top

"Yeah. Taking out the shuttle being prepped is item #1, and if he can drop us down behind the escort without them noticing, even better." Uri looks at Wile. "Can you do that?"
Top

The rodian shifts a bit in his seat and says, "Well, based on the transmission, the shuttle won't arrive for ten standard hours. As long as they don't bring in a Destroyer or Frigate, I should be able to hit their shuttle hard enough to at least slow them down."

"I don't know the terrain but based on your description, won't they see our ship coming in?" Shrugging, Wile says, "I'll follow your lead. I know how to keep myself out of trouble, but this... uhm.... rescue mission and facing off against Clones is tougher than a facing a bunch of spacers or pirates."

Sounds okay, but I'm sure they'd see the ship coming in step 3.
Top

The three of them modify their plan and accommodate for Uri to take a while to rest and for the group to do reconnaissance in case they learn new information.

"Before I go lay down, I can help you familiarize with this speeder model, if you want."

As long as it doesn't hinder their timetable too much, Uri opens up the Aratek speeder to show Janos where everything is, giving him the model number and relevant information. Then he finds a bed and climbs into it.

If feasible to do without interrupting the timetable below, Uri will provide a modest assist to Janos' Mechanics check, providing 1 Boost to use while he repairs the speeder.

Fly to safe distance near BORD base.

Current plan, subject to change after recon:
Approach through Dewback Pass. Use the speeder to save time.
Use Uri's knowledge of patrol pattern and timing to avoid detection.
Wait for the escort to pass, then follow.
When transport shuttle arrives, Zillo's Shadow will engage.
Simultaneously, ground team will ambush the escort and free the prisoner.
Top

Mechanics
Difficulty: equal to half or more, 2 purple (average)
Have tools: yes


After a brief overview of the speeder, Janos attempts to fix the damage done by the bounty hunter. However even with Uri's assistance, they can't seem to repair the damage at this time. Perhaps, they need to scavenge some parts or attempt again tomorrow when they are more clear headed.

As padawan Uri heads to rest, he stops by the room designated by AZI-3 as the new medbay. Working with the tools available, the medical droid is able to stitch up Uri's wounds and apply treatment which allow him to recover most of his wounds.

Meanwhile, Wile flies the ship low to avoid any sensors. When he gets as close as reasonable safe, he sets the ship down and waits for the others to finish their tasks. Based on Uri's information of where the base is located, the rodian estimates about an hour hike from here to the landing pad. Using the speeder would allow them to save quite a bit of time. Rather than cause a huge dust trail, they go slow with the speeder and then park and hide it so they can continue the rest on foot.

As they approach the base through Dewback Pass, they find hundreds of B1 and B2 Battle Droids and dozens of AAT-1 Hover Tanks.


You can loot the fallen droids. items include:

Uri watches for patrols but they are either spaced out with longer gaps or the Clones have abandoned patrols because they wait and find no patrols. He knows the two entry points into the facility should be guarded and the pair are able to stop a few Clones standing around at the landing pad.


You can see the Clones (markers indicates groups) at landing pad. The one on the 'ramp/road' and at the doors of facility are educated guesses.

You're around the blue dot area. You can climb up the rock area and approach the landing pad from the north or east sides of that cliff area. Requires athletics checks (2p for coming in from north and 3p for coming up the eastern side) 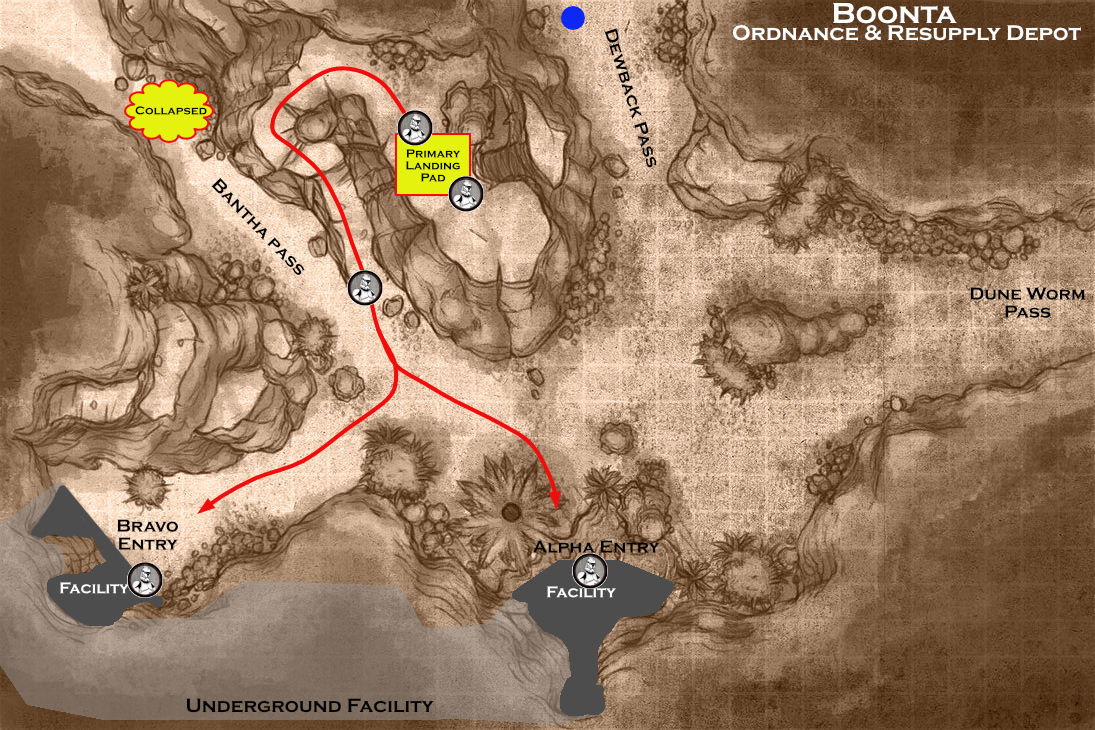 Uri stoops to draw a map for Janos in the sand with the bottom end of his lightsaber hilt. "There should be another patrol around the plateau in Bantha Pass," he says, marking the patrol's path with a line. "We also need to get a look on the other side of the plateau to see if they're currently moving the prisoner up to have him ready at the landing pad for transport. So I'm gonna creep up there and take a look."

The kid scoops up sand and spreads on his jedi robes to help him blend with the desert. He runs his hands along his ruined robes and scowls. "I hate sand. I've seen enough of it on this planet to last me my whole life. As soon as we get out of here, I'm going to wash every single grain out of my clothes."

After this important trivia on himself, he gets to sneaking south toward the base of the plateau to risk surveillance of the Bantha pass.

Tentatively this, if Othniel has no objections. If Janos does the same, let him tail behind me.

Uri rubs sand on robes to blend in for a Boost to Stealth and moves south to look at Bantha Pass, looking for patrols and the prisoner escort.

Janos looks on as Uri draws his map, nodding in agreement with the plan. "Here, take my electrobinoculars when you look," he adds as he hands them over to Uri and follows the younger man's actions in trying to blend in as best he can.
Top

The padawan Uri moves without detection and fast around the bend and towards the trail that leads up to to the landing pad. Behind him, Janos struggles a bit in the desert perhaps due to his unfamiliar with the planet or stalking through the desert terrain. Along the way, Janos causes a few rocks to fall and make a noise, but after a few moments it doesn't appear anyone noticed.

As they turn the bend, they see three clones moving a large cargo box up the trail towards the landing pad. The cargo box rests on a powered hover lift allowing the troopers to just guide it up the trail. However, due to their delay caused by the rock slide noise, they arrive as the detail turns the corner and arrives atop of the plateau. 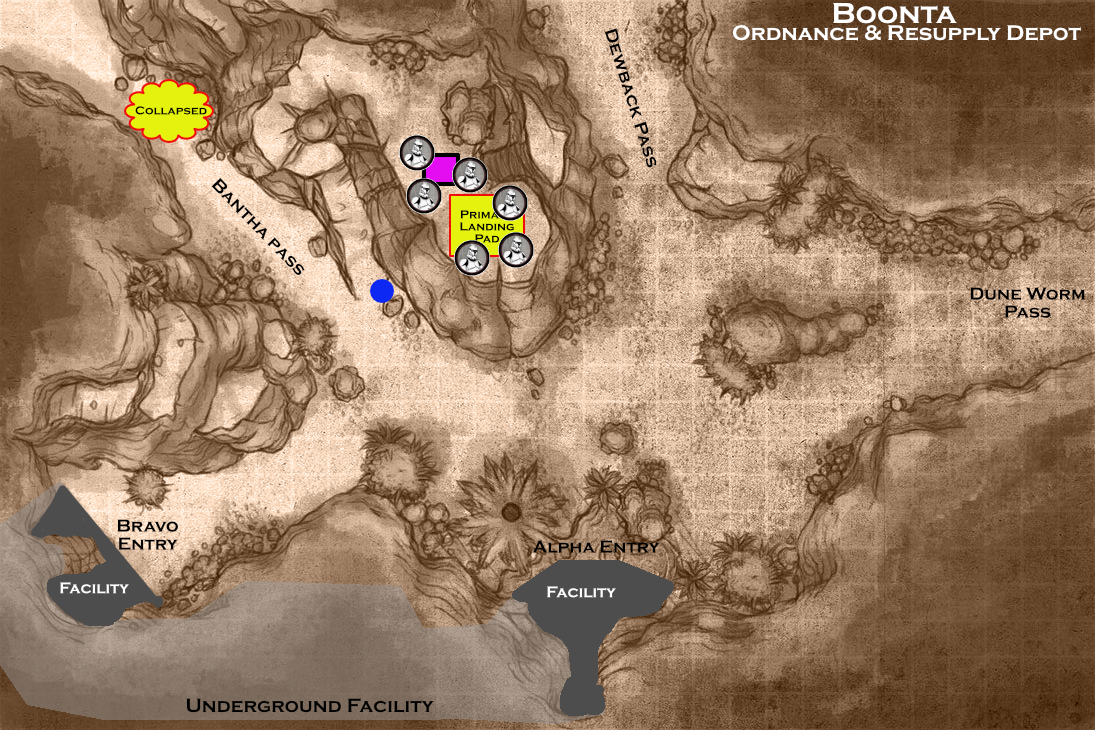 It looks like any other container that they used to haul gear, but maybe the troopers would have felt extra safe by throwing the General in a box. Uri whispers to Janos, "Do you feel anyone inside that box?"

Do we sense Jedi in the box?

If the prisoner isn't up there, I say we camp out in the Bantha Pass and wait for the escort to come out and pass by, as we planned.
Top

"Not at this distance, sorry," Janos responds. "We'll have to get closer. Better prepare yourself for a fight," he adds, mentally counting the troops. He'd never gone into battle against clones, but he had fought alongside them and knew they were incredibly well-trained.
Top
Post Reply
109 posts