Episode 1: Can I Call You Crewmate?

Many pirate crews take to the sea with all the same goal: To hunt down and claim the Pirate Kings treasure, known as the One Piece! Will your crew be the one to beat the other crews, avoid the navy, and find the legendary treasure?

Episode 1: Can I Call You Crewmate? Gold Roger the king of the pirates obtained this and everything else the world had to offer. And his dying words drove countless souls to the seas.

“You want my treasure? You can have it! I left everything I gathered together in one place. Now you just have to find it!”

These words lured men to the grand line, pursuing dreams greater than they ever dared to imagine. This is the time known as the great pirate era. Genshi Island A small island in the East Blue, home to a few small villages, and no special landmarks. Just a basic island, but that's enough for the residents, as its beautiful to look at. A few hillsides gave great views to the ocean. Quite the sight.

A small girl sits on one of those hills, playing with a doll in her hands. The child was a small blonde girl, her doll with red hair and with patches all over it. It was all she could have but she loved it either way. She looks up and sees something in the distance, in the ocean. Standing to her feet, she squints to get a better view before gasping, "A pirate ship!"

and indeed it is! A small ship was on its way toward the island. The girl decides to run to her mother to tell her what she spied. It could be evil pirates! Though the ship's inhabitants would prove otherwise to a sense. On the small ship, barely even a Sloop, were two men; a Mink and a Cyborg. The two had been sailing for a few days, and through the excitement of the official title of "Crew", forgot to fully prepare for the trip. The two had been out of food for the past two days and were out of energy.

When either of the two wake up, their boat would be tied to the docks, and a girl would be sitting on the docks, looking at her doll. In the boat, was some fresh fruit in a basket. 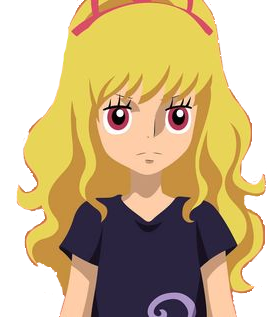 After two days without food and water Zed sits on the ship's deck, emaciated, his stomach angrily growls begging for food. The sound of a seagull immediately grabs Zed's attention, the sight of land fills the hungry Mink with a sudden burst of energy, he raises his head and smiles at his crew mate, Hunt, "Land, land ahead, finally my friend this perilous times have come to an end, time to get ready, it's been a while since we've made port." Zed stands up and tightens up his suit, he takes a moment to make sure that his it is spotless and grabs his trusty cane as the anchor is lowered and the boat comes to a full stop at port. He makes his way down the gangplank and steps onto the cobblestone below, his shoes making a satisfying sound as he walks. He spots a little girl with a fruit basket and walks over to her and says to her, "Good morning, beautiful day we are having don't you think?" As he licks his lips at the sight of the juicy fruit that she is holding. "Say would you mind sharing some of that fruit with a hungry traveler?"
Last edited by Hungry Xenomorph on Sun Jan 26, 2020 6:41 pm, edited 1 time in total.
Top

Hunt D. Barnacle is an over 10 foot tall steel-skinned giant, his eyes a flat yellow screen giving off odd reflections in the sunlight. He opens up a compartment in his chest and draws out an oversized wrench. "Agreed, Captain. I'll make sure everything is tightened up right before we disembark, of course. Never put off 'til tomorrow what you can do today." He goes around checking various sections of the ship, constantly making minute adjustments as though never fully satisfied with its operation. The usual miasma of coffee scent has thinned out considerably the last few days, as he has had to conserve. He is definitely moving slower than his peak, and perhaps a bit grumpy about it.

The big man startles, lashing out randomly after being ... asleep? Knocked out? Poisoned? All he knows is that one minute he was groggily going about his duties, and the next he was waking up looking at some strange kid. He pauses as she doesn't exactly look threatening, so he calms himself and slowly pulls himself back on his feet. "Um ... hi, kid. Good day?"
Rule Number 12: "A soft answer turneth away wrath. Once wrath is looking the other way, shoot it in the head."
Top

The child, kicking her legs over the side of the docks, playing with her doll, looks over at Zed, "You guys are pirates, right? My mama told me to bring you the fruit in hopes you won't raid town."

The child was pretty blunt with her words, but by the look of her, she didn't understand that. By the looks of her, she was probably about 5 or 6 years old. She looked over at Hunt and waved her hand at him, smiling sweetly.
Top

The big cyborg looks a little uncomfortable, beyond his fatigue and confusion. "No, little lady, no raiding the village this time. Just looking to make shore and stock up on supplies." He doesn't immediately reach out to the fruits, as they were clearly an offering to avoid getting robbed later. "You don't happen to have coffee in these parts, do you?"
Rule Number 12: "A soft answer turneth away wrath. Once wrath is looking the other way, shoot it in the head."
Top

Zed looks sweetly at the little girl, "yes, as you mentioned we are pirates, however we are not here to cause the town any trouble." Zed reaches into the basket and pulls out a plump peach and bites into it, the sweet juices of the fruit giving him a burst of energy. Zed crouches so that he is at eye level with the little girl, "My name is Zed, please tell me what is yours? sweet child."
Top

"... Saddie..." The girl said shyly before she turned her attention the cyborg, nodding at him, "Yeah. We have coffee. I think its yucky."
Top

Zed extends a gloved hand towards the little girl, "Saddie, that is a very pretty name, it is an honor to meet you. Say Saddie do you think you could show us the town?"
Top

Barnacle carefully stands up, making sure his balance is correct before trying to walk anywhere. "Well the way I make it is yummy, little Saddie." He looks around a bit. "Did you see us sail into the dock? I don't seem to remember actually landing, just sailing nearby."
Rule Number 12: "A soft answer turneth away wrath. Once wrath is looking the other way, shoot it in the head."
Top

Saddie hesitated but she takes Zed's hand and stand up, holding her doll tightly, "Mhm, you hit the dock and were asleep so i tied the boat."

Saddie started walking with the two. From the dock, there was quite a walk from there to town, at least 10 minutes. When the three finally got into town, the two would see a small village, only consisting of a few buildings, a field of crops (along with fruit trees/bushes), and a small mountain. First place Saddie took the two was to what seemed like a bar/restaurant. Behind the counter, was a blonde woman, cleaning the place up. She turns to look at who came in and her face turned to a scowl, Saddie running over to her and hugging her, "So you are the owners of the boat Saddie said about. What, are the fruits not enough?"
Top
Post Reply
20 posts

Return to “One Piece: Romance Dawn”