Realizing they would never be able to control Mandalore and wanting to make sure no other faction did, the Empire launched the so-called "Great Purge" against the Mandalorians. Some attempted to fight the Imperial effort, but the purge nevertheless led to the near-total genocide of the Mandalorian people. Some Mandalorians, survived the Purge and fled Mandalore, though they scattered across the galaxy.
Post Reply
125 posts

Resyr shifts slightly more towards the open door. From his quick view, he can see the goons huddled behind a table for cover, and one dope with a proud smirk on his face standing for everyone to see. Not too bright for a leader. The Mandalorian calls out "I wish to negotiate!", the sarcasm in his voice emphasized by the fact that he's aiming his blaster square at the man's chest. With a quick squeeze of the trigger, Resyr fires a blast at the leader and then quickly shifts his body back behind the cover.

Turn:
-Aim as a manuever
-Fire at the Gang Leader as an Action
-Spend 1 Strain to take cover.
Chuckling, he tells his comrades "I don't think they bought my clever ruse."
Top

For example, 1 Triumph for "Power supply/ammunition store, fuel container, etc. explodes near target inflicting 10 dmg to all engage characters" - which would hit Group C and Leader. (10 dmg is before soak is applied, so that would be 6 more wounds to leader and 7 wounds to Group C (which would kill 1 of 3 of them). Other good ones is floor collapsing on leader causing him to fall short range (several meters which hurt) and immobilize him; other options is making a wall or something collapse staggering him and group C for 1 round, etc. Lots of good cinematic things to pick from.

You can also just tell me GM's choice and I'll spend them on cool things for you, so we can keep moving

Resyr peeks out from the room and takes a quick shot hitting the speaker and presumed leader of the group square in the chest. As the Mandalorian then quickly moves behind cover, he hears and explosion. His shot had impacted upon the leader's spare energy cells in his bandolier causing them to overheat and explode. The explosion causes one of the leader's thugs to instantly die from the shrapnel projected forward and a second thug to take a major wound.

The Thugs retaliate in kind ...

** Waiting to resolve Resyr triumph and adv since that affects what the Thugs/Thug leader will do **
** Boh post in discord, or site chat, pm, or here on thread for how to spend those 2 adv and 1 triump


Mandos = all have cover, +1 setback to perception checks vs thugs, +1 range defense

no successes, so no damage, but 1 triumph


"Farkle!" The leader shouts as he takes cover. "Get them!" he orders as he fires a shot at the Mandalorians. His shot goes wide, missing Resyr and hits the ceiling above him causing it to collapse. The durasteel ceiling falls atop Resyr and doesn't do any harm to him, but causes him to become staggered for a moment.

One of the group of thugs (Group A) takes a position behind the wall and shoots at the Mandalorians hoping to land a shot through the entry way. The blasters from the groups blaster pistols finds Lorn and lands a few blows against his armor. Lorn feels a bit winded from the blasts, but it wasn't enough to knock him down. By exposing themselves, Lorn now has a good idea of their positions.

The group nearest the presumed gang leader then opens fire at the room of Mandalorians. With one of their group downed and another wounded, the remaining two fire with their blasters. Their volley of shots land on Rayne doing minimal damage.

The last group is positioned closest to the room charges from their cover into the meeting room. With chains in their hands, they hope to knock the Mandalorians down. Rayne is the unfortunate Mandalorian who their chains initially target, but the skilled Mandalorian dodges the attacks and maintains her balance.


Mandos = all have cover, +1 setback to perception checks vs thugs, +1 range defense

Resyr = staggered for 1 round -- A staggered character cannot perform actions (including downgrading actions to maneuvers). You can use your maneuver, but you cannot use your Action next round. 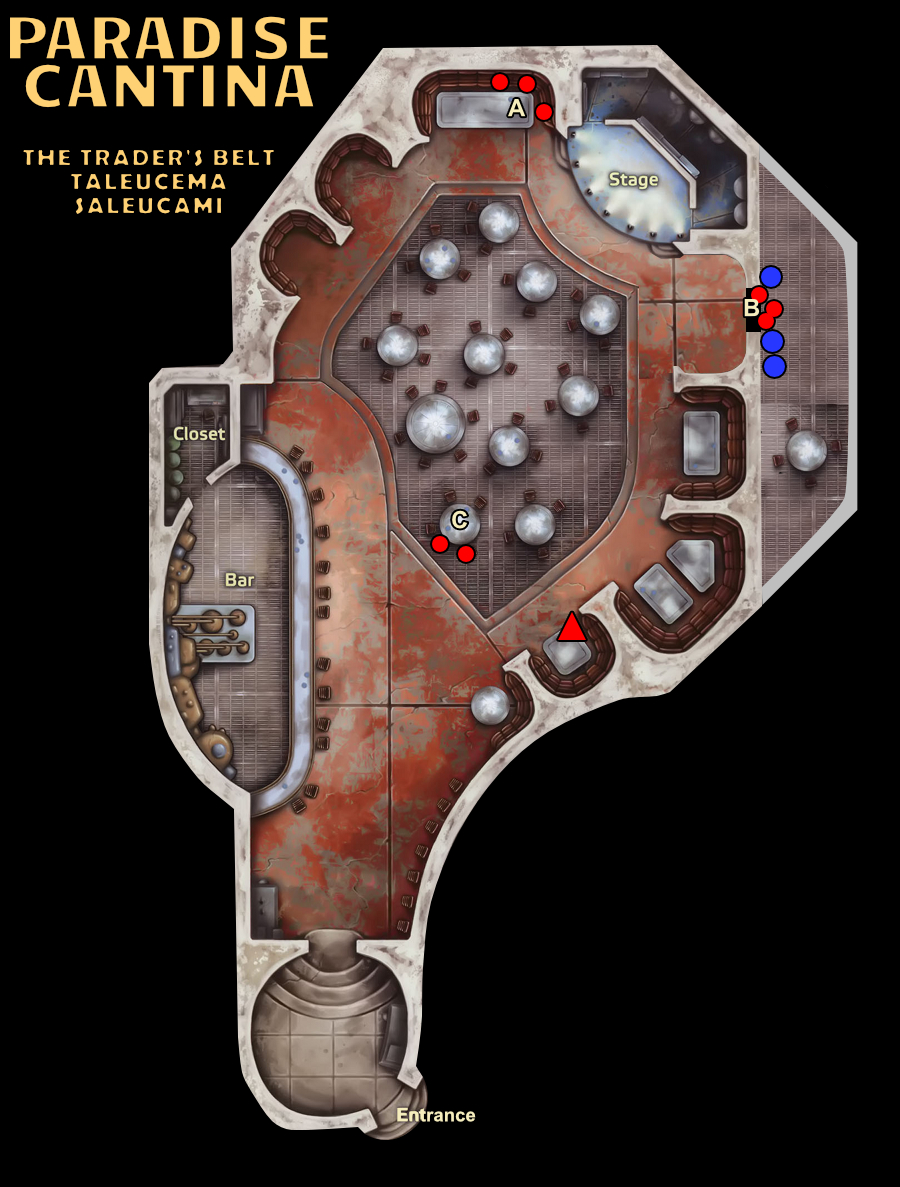 
Engaged with a group of thugs holding chains, Rayne and Lorn ...
Top

Posts: 9954
Location: The Secret Places Beneath the Earth
Title: Keeper of the Hidden Word

Rayne aims her rifle at the nearest thug and then fires.

"Can't say we didn't warn you bozos," Lorn quips. He steps back, and quickly takes aim and fires at the nearest assailant.

Maneuver to step back to short range, take strain to aim, action to shoot.
Top

Rayne steps back away from the chain wielding thugs. She fires her blaster rifle, but misses her targets. However, her shots cause the group to become momentarily distracted giving Lorn an opening.

Following Rayne, Lorn quickly steps back and lets loose with a flurry of blasts from his heavy pistol. The opening provided by Rayne allows Lorn's shots to find and take down two of the three thugs. The last chain wielding thug is left standing alongside a staggered Resyr. 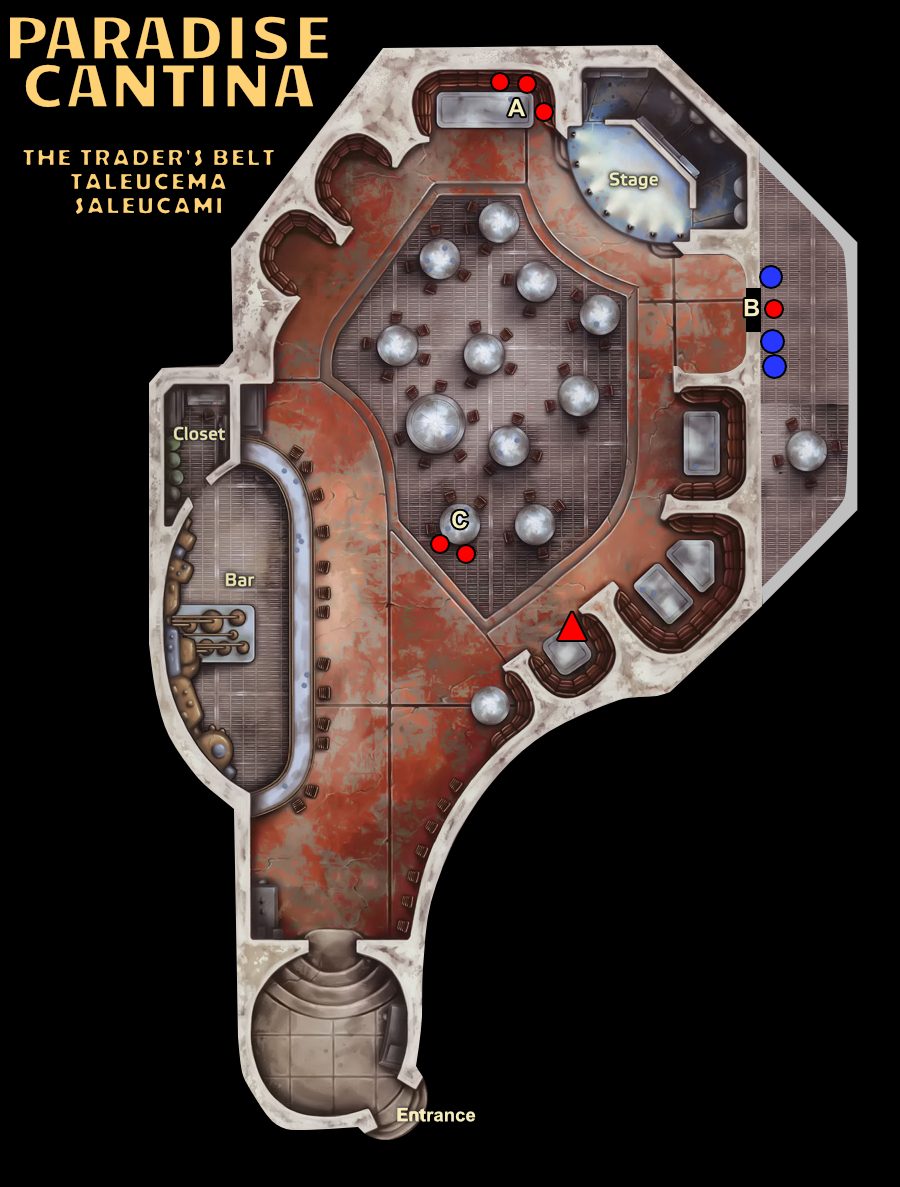 Mandos = all have cover, +1 setback to perception checks vs thugs, +1 range defense (no cover vs Group B)

Resyr = staggered for 1 round -- A staggered character cannot perform actions (including downgrading actions to maneuvers). You can use your maneuver, but you cannot use your Action next round. -- Also engaged with Group B.

Posts: 9954
Location: The Secret Places Beneath the Earth
Title: Keeper of the Hidden Word

Rayne aims and opens fire at the thug who is still standing. "Don't say we didn't warn you," she mutters.

Didn't go back into cover

Rayne takes her time to get a clearer shot at the sole remaining chain wielding thug. Her rifle blasts at close range hits the man leaving the smell of burnt clothing and flesh lingering in the air for a moment before dissipating. The last of the three who charged at the Mandalorians are now down, but they are still outnumbered by those in the main room of the cantina.

Triumph spent on Upgrade difficulty (1) of target's next check. Next Rayne dice roll will be +1 difficulty

As Rayne takes out the last of the chain wielders, she exposes herself to an angle through the doorway. With an opening, one group of thugs open fire sending a volley of blasts from their light blaster pistols. Her armor takes the brunt of the assault, but the blasts will leave a minor bruise on her.

Meanwhile the group nearest the gang's leader opens fire on Lorn. Their volley leaves several carbon marks on Lorn's armor, but none of the hits do much real damage. His armor defects and takes the majority of the hits.

The gang's leader, now in cover, returns fire into the room. A blast from the gang leader's heavy blaster pistol lands on the slightly exposed Rayne. Her armor deflects some of the blast, but the blast leaves a bruise that she feels.

Resyr and Lorn = have cover, +1 setback to perception checks vs thugs, +1 range defense (no cover vs Group B)

Rayne = no cover maneuver spent (just aim and shoot), so she is exposed (it's only 1 setback die - the opposite of a boost, so it's not a huge penalty).

Resyr = staggered for 1 round -- A staggered character cannot perform actions (including downgrading actions to maneuvers). You can use your maneuver, but you cannot use your Action next round.

Thug Minion Group B
all incapacitated 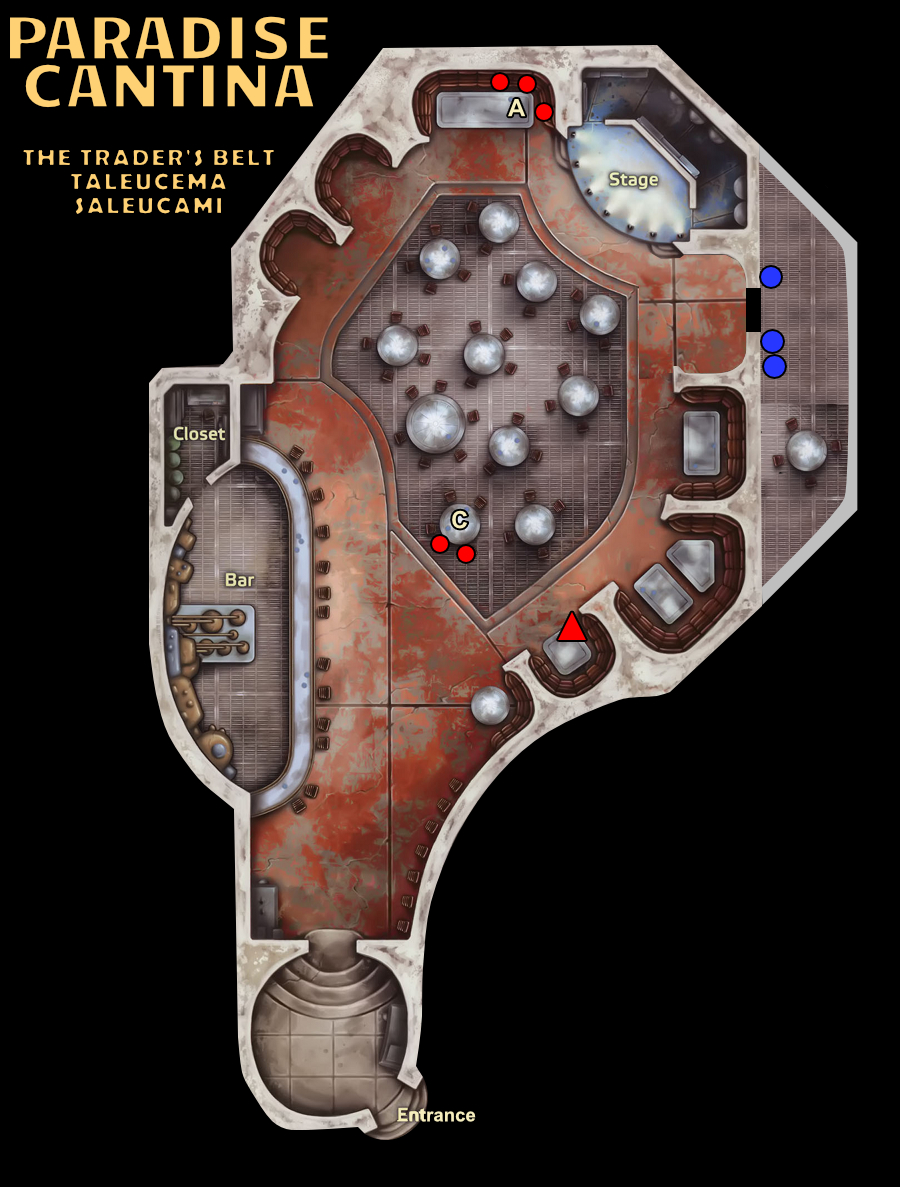 "You can still surrender, morons," Lorn calls out as he aims and squeezes off another shot at the group in the middle of the cantina.

Maneuver to aim and action to shoot at someone in group C.
Top

Lorn peeks out from the doorway and fires a volley towards the group nearest the gang's leader. His shots avoid the table and chairs which the group cowers behind and strikes both of the two in their exposed heads knocking both out.


All Mandos = have cover, +1 setback to perception checks vs thugs, +1 range defense

Resyr = staggered this round -- A staggered character cannot perform actions (including downgrading actions to maneuvers). You can use your maneuver, but you cannot use your Action next round.

Thug Minion Group B
all incapacitated 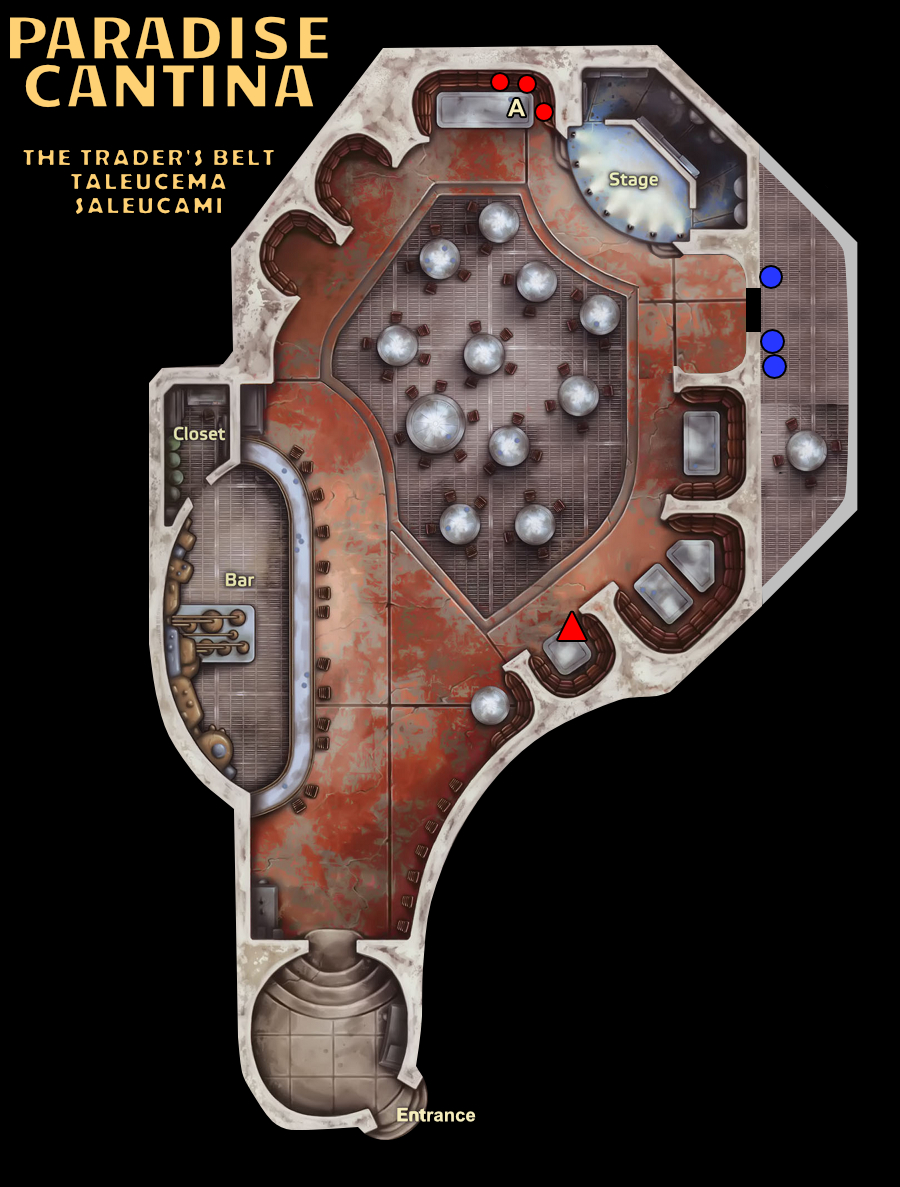 Return to “Star Wars: The Mandalorians”