Converting the L5R setting to the FFG Lord of the Ring LCG co-op style game.
Post Reply
3 posts • Page 1 of 1

So this will be to track various traits and keywords and their meaning along with symbol changes. Game terms are just renaming of core game mechanics, little more than just re-themeing of a word or term. Common Traits becomes a bigger change, some of these are going to be nothing more than fluff, while others will work off various cards, "Attach to a Magistrate" or "Target a Duelist" that sort of thing. They won't have rulebook effects of their own. Some might however and we'll have to see. Right off the bat I can think of Shugenja having some rule that allows only them to attach spells to, so each spell card doesn't have to have that text on it. 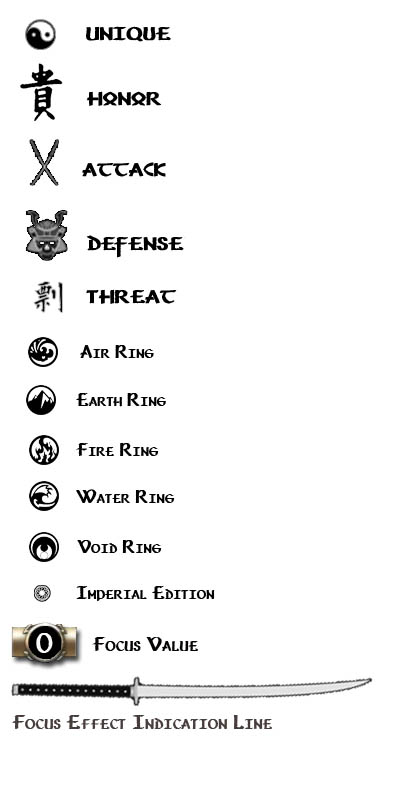 So a big piece of L5R is if your characters are honorable or dishonored. I think that has to come into effect here. Characters, heroes and allies, start play as Honorable. When they becomes Dishonored you flip their card upside down to show they are dishonored. Card effects play off this state, perhaps only targeting Honorable Samurai, or raising threat if you have a dishonored guy, etc.

The way to rehonor someone is key. Ways to rehonor them would be via card effects. Perhaps also:

Refresh Action: Discard the top card of you deck. Raise your threat by the card's Focus Value. Rehonor a target character you control.

Playing with the Focus Value becomes tricky, as you may want to have high FV cards in your deck for Duels or Tacticians, but rehonoring your characters with these cards are costly. It shows the greater honor of these more powerful cards and deck types.
"He that breaks a thing to find out what it is has left the path of wisdom." - Gandalf
J.R.R. Tolkien, Council of Elrond, The Fellowship of the Ring
Top

Cleaning this mess up:

Focus Value - Cards will now have a small icon with a Focus value on it, this will be on both enemy and player cards.

Duelist - If only one character in the duel has the Duelist keyword than they gain the following. "If this character ties in a duel they are considered to have won regardless of who the challenger was" A duelist may also find he can be the target of special card text or effects.

Spells - Cards with the Spell trait can attach to Shugenja only. A Shugenja may only have a number of spells attached to it equal to his current Honor.

Tactician - After a card with the Tactician keyword quests successfully you may ready it.

Kiho - Event cards with the Kiho trait can enter play in one of two ways. First it may be played as normal by paying its cost and playing its action before discarding it. The second option is to attach it to a Monk for no cost during the Planning Phase (you must still have a resource match). It becomes a Kiho Attachment with the Restricted keyword attached to the Monk. You may now perform the Kiho Action of that card. The Kiho is then discarded.
"He that breaks a thing to find out what it is has left the path of wisdom." - Gandalf
J.R.R. Tolkien, Council of Elrond, The Fellowship of the Ring
Top
Post Reply
3 posts • Page 1 of 1