We fly over oceans, hold the sum of all recorded knowledge in our hands, and speak with relatives halfway across the world without leaving our chairs. Magic isn't just flying on broomsticks or calling down fire from the Heavens. Magic is limited only by your Imagination, and your Will to make it manifest. There's a battle going on over the nature of Reality and Mankind itself. Pretend it isn't there, or get involved and forge the Future you envision.

Welcome to the Ascension War.

With the monotonous grinding of gears from the Wheel growing ever louder in his head to subtly remind him of Time steadily passing them by as they spent it in deliberation in the increasingly vacant parking garage, Dexter abruptly interposed himself in the discussion between Pixel and Geyser with a percussive clap of his hands. "Right, well it sounds like we've got a solid plan then. We'll lie low at Pixel's and put down the necessary wards and security measures with Geyser's friend and I standing watch." A part of him felt that he would soon regret so readily volunteering himself for such a task, but now was not the time to fret over his impulsiveness. "After that, well, I suppose we'll cross that bridge when we get to it, won't we?"

Eyes roving searchingly about the parking garage, the Orphan shared a questioning look with the other two, settling specifically on Geyser. "Your friend. Autumn was it? She wouldn't happen to own a car by chance, would she? Something tells me that walking on foot is not going to be the safest mode of travel right now."
''At the center of your being you have the answer; you know who you are and you know what you want.'' - Lao-Tzu
Top

Pixel nods at Geyser words. "Okay, that sounds like as good a plan as any. After we've rested, maybe we can do a bit of research to try to figure out what's going on and how best to protect ourselves."

At Dexter's warning about walking, she says, "Well, if we can find someplace away from prying eyes, I could try translocating the data that constitutes us ... ah, I guess you would say teleporting us to my apartment."
Top

"Really? That sounds very handy. If we're all Awakened in here, it should be safe to do that in the garage, right? Autumn drives a motorbike, but I drove here in my car. We could pile in, drive to her, and then have her follow us. Or, as much as I'd hate to leave my car overnight, we could teleport if that would be better."

He texts Autumn again.
"Still talking. Gimme your location, we might drive to you."
His phone buzzes with an address near Autumn's usual haunt.
"Came here after lanes closed. You missed June Spades. She makes it look almost real n_n"

Clarification: I'm offering to drive us to Autumn & then have her follow us on her motorbike to Pixel's. Or: we teleport for everything.

As Dexter considers the constantly changing of time's progress, the garage is in fact steadily emptying out. Various people put on motorcycle leathers and head out, some walk calmly away to locations unknown, and one person drives away in a minivan with bumper stickers about being a proud soccer mom. A moderately jarring reminder that many have to live in the mundane world just as much as the supernatural one.

The ritual preparations come to an end. On the ground is drawn out a classic pentagram in chalk, with small cubes of different colored metals placed at regular intervals around the circumference. In the center of the circle stands a hooded and cloaked figure standing next to Sparrow. The middle-aged asian man leans forward into the shadowed hood and gently kisses them, then with some effort steps back and outside of the circle. The figure begins chanting, and pulls out a curved knife from beneath their cloak. They pull back the sleeve of their left arm, then begins cutting deeply into their own flesh, blood flowing freely down and to the ground. With a shout they raise their bloody arm to the sky in a fist, and blackness floods out to the edge of the circle, clearing a moment later with only a vague outline of the circle left. Sparrow sighs, then begins scraping away the remaining chalk with his feet, erasing any remaining evidence of the ritual circle.

Correspondence 3 allows a person to teleport themselves only. I did allow an exception in the Prologue for Pixel to get Jon Leng back with her to the safety of her apartment, but that was the exception. Correspondence 4 is needed to open up a Gate that others can walk through too. Which is why most are going by mundane means, while the Teleportation Circle had to be set up by the big-wigs only, for taking the critically injured away.
Rule Number 12: "A soft answer turneth away wrath. Once wrath is looking the other way, shoot it in the head."
Top

”After everything that’s happened tonight, I think that-”

Dexter’s reply is cut short as his attention is briefly redirected towards the observance of whatever arcane ritual is being enacted by the senior Council Member known as Sparrow. On any other occasion the Orphan might have been curious enough to examine and inquire about the markings or the nature of whatever sanguinary ritual the Akashic had performed just now, but weariness and anxiety had made him indifferent to anything that didn’t fall under what he deemed to be of the utmost importance, which in this case was getting out of this parking garage and finding somewhere safe to rest, recuperate and collect his thoughts as soon as possible.

”-I think that we should stick to more mundane means of transportation.” he resumed after that momentary diversion had played itself out. “We need to conserve our energies for future endeavors such as the erecting of wards and other necessary security measures.”

Dexter looked tiredly over at Geyser. “You said you have a car parked here? Then I suggest that we take that, rendezvous with your roommate if you want and then lie low at Pixel’s.” The half-roma groaned and clutched his head at what he felt to be the early onset of either a headache or hangover, it was too early to say which. “Look, we’ve wasted enough time loitering around here, can we please just go already?”
''At the center of your being you have the answer; you know who you are and you know what you want.'' - Lao-Tzu
Top

Pixel says, "It's probably better to take the car. I'm not actually sure I actually have the ability to transpose the data of everyone here and, ah, we may not have a lot of time."
Top

"Yeah, of course. It's not far, just over here." Geyser points in the vague direction of his vehicle and leads the others to it.

"It isn't fancy, but it's decent, old but decent," he rambles. "It's got a radio and air-conditioning, the essentials. We'll pick up Autumn, and take the fast road from there."

Geyser's car is a late 80's yellow hatchback Honda. It's a little dinged, and has some brown stains in spots where rust typically creeps in, as well as a few spots of actual rust. There's enough space in the backseat for three people.

He sends Autumn a quick text to let her know that they're coming.
"On our way. Are you with your bike?"
She replies: "Took the bus"

I assume we want to speed this up and get to Pixel's haven asap.
Top

Pixel gratefully climbs into the car.

Yeah, I don't see a need to roleplay out the trip unless something exciting, like being attacked by flesh-eating sheep, happens along the way.
Top

The car isn't anything special, but Geyser is correct that the radio and air-conditioning are functional. The yellow hatchback isn't the prettiest car, but it gets from Point A to Point B without issue. Geyser drives through the light fog of a San Francisco evening, following traffic laws and disappearing in the crowd of buses, cars, bicycles, motorcycles, mopeds, and even skateboards. Blaring fire engines pass the other way towards MOMA, the mortal authorities responding at their best speed. You however are unimpeded on your path to safety.

Fully agreed. Pixel feel free to describe your place, and Geyser his housemate. Nothing happens on the way there. At this point purely an opportunity for roleplaying your feelings and reactions.
Rule Number 12: "A soft answer turneth away wrath. Once wrath is looking the other way, shoot it in the head."
Top

When the group arrives at Autumn's haunt, a club near a bowling alley where Spades had performed less than an hour ago, they find a pale, dark-haired woman who appears to be in her 20's, equal parts stunning and stoic. She comes out of the club at near-uncanny timing, wearing a casual oriental dress. "She seems to always know when I'm about to show up," Geyser explains. He pulls up to the curb, and she opens the door by the remaining empty seat gets in, with surprisingly swift and fluid movement.

"Hello," she says in accented English. "Nice to meet you. I am Autumn." She says something else in regional Chinese, and Geyser translates.

"She'd rather speak Cantonese right now. Still picking up English. She hopes you're not offended."

She doesn't take up much room, and there's something off about her. She's mostly quiet during the ride, and whenever she smiles, it's brief and modest. Despite her aloof attitude, she's willing to answer questions. Interspersed in her replies are English words borrowed in Cantonese.

She looks wary, as if expecting an attack (not from the passengers). 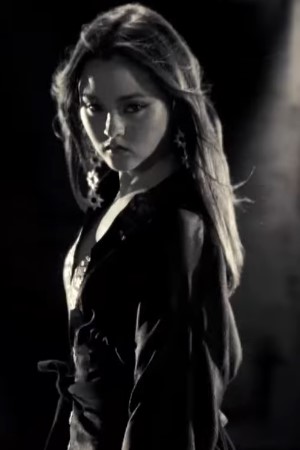 Here's my dhampyr ally. I didn't have a picture for her until now, but I remembered Miho from Sin City (2005) and thought "yup, that's about right". Sin City feels kinda appropriate, come to think of it. Then I put on "Hard Landing" (Shadowrun: Hong Kong) when I started this post.