When a mysterious visitor comes to Absalom Station selling items belonging to a lost Starfinder, the Starfinder Society takes note. The PCs are dispatched to discover out how the recent arrival found these items, leading them on a series of quests beyond the Pact Worlds and into the stars.

A few days after the confrontation with Ferani Nadaz and the Downside Kings, a messenger arrives at your lodgings with an invitation (printed on paper that is as black as the void of space), requesting your company for a meeting with His Excellency Gevalarsk Nor, the ambassador of Eox.

Anyone wish a passing knowledge of Xenology or just any galactic history or political understanding, understands that Eox is a planet inhabited almost entirely by undead creatures. Its dominant species, the humanlike Elebrians, were forcced to transform themselves into undead to survive an ancient cataclysm that almost destroyed their world. Although many sentient species find them disturbing, the Elebrians are not considered "monsters," at least in polite society. Eox is a full signatory to the Pact, and its undead inhabitants are equal citizens of the Pact Worlds.

Quig, who has been keeping his ear to the ground, recognizes Gevalarsk Nor as the head of Eox's diplomatic delegation to the Pact Council, a prominent position indeed. The invitation says the meeting is to take place at the Eoxian embassy in Absalom Station's wealthy Parkside neighborhood in the Eye. The embassy is normally restricted to Eoxian citizens and foreigners with official business, but the invitation will give authorization to enter.

Welcome to Act 2! Here we will explore what makes that damn Drift Rock so special, and thickening the Plot.
Rule Number 12: "A soft answer turneth away wrath. Once wrath is looking the other way, shoot it in the head."
Top

Quig loves the paper, and makes sure to store it along with all his other do dads and whatamacallits. When the group is gathered up one evening for dinner, the rat man relates what he knows about Eox and asks several, if not annoying, questions of the others about what they know. Eventually as the evening is progressing he adds, "Sounds important, good-good for us. Important people we are now." He puffs his chest out.

Did I miss a level up or anything? Sorry.
"He that breaks a thing to find out what it is has left the path of wisdom." - Gandalf
J.R.R. Tolkien, Council of Elrond, The Fellowship of the Ring
Top

DREAMS, having no need for the sustenance of food, instead reads from a religious text, sitting across from the two teammates that had become stuck with the questionable moral android. He quietly flips the page before his voice kicks on and responds to his rodent pal, "Important, or just pulling the wrong straw from the bunch. Though this kind of meeting may just our group a bit of an upper punch. Diplomatic connection, a meeting with the ambassador Nor? Why, an opportunity of that magnitude would be quite the score."

Jalesh looks curiously at the dark envelope and invitation, he remembered some old saying about dark wings and dark words, he couldn't quite remember what exactly that was all about but the thought of going to a meeting with the elites of Eox presented an unexpected upwards move in society for the big Vesk. " I guess we are moving up in the world."
Last edited by Hungry Xenomorph on Tue Nov 17, 2020 2:29 am, edited 1 time in total.
Top

Moving up in the world indeed. His Excellency has that lofty of a title for a reason, he isn't just some random under-secretary. Normally a connection would go through an underling, one with a title and responsibilities, but still not an important person. But you get the Ambassador himself, which is either a big compliment or worrying, depending on your viewpoint.

DREAMS has a great deal of local knowledge of people and places, so has some idea of the embassy as well as the Ambassador himself. It is said that the Eoxian embassy has been decorated in a style reminiscent of traditional Eoxian architecture - black marble and bone-pale limestone, vaulted ceilings, sepulchral furnishings, and disconcertingly organic architectural details. The main office is rumored to be spare, lacking in ostentation that others in his position might display.

Gevalarsk Nor is high-profile enough to have pictures available to identify him. Nor's elongated cranium marks him as an elebrian, a native of Eox, and he is clearly undead - his skeletal countenance displays no scrap of flesh, and an eerie light burns in his otherwise empty eye sockets. A necrovite is a spellcaster who has used its powerful magic to achieve immortality in the form of eternal undeath, storing its consciousness and soul in a technomagical relic called an electroencephalon. 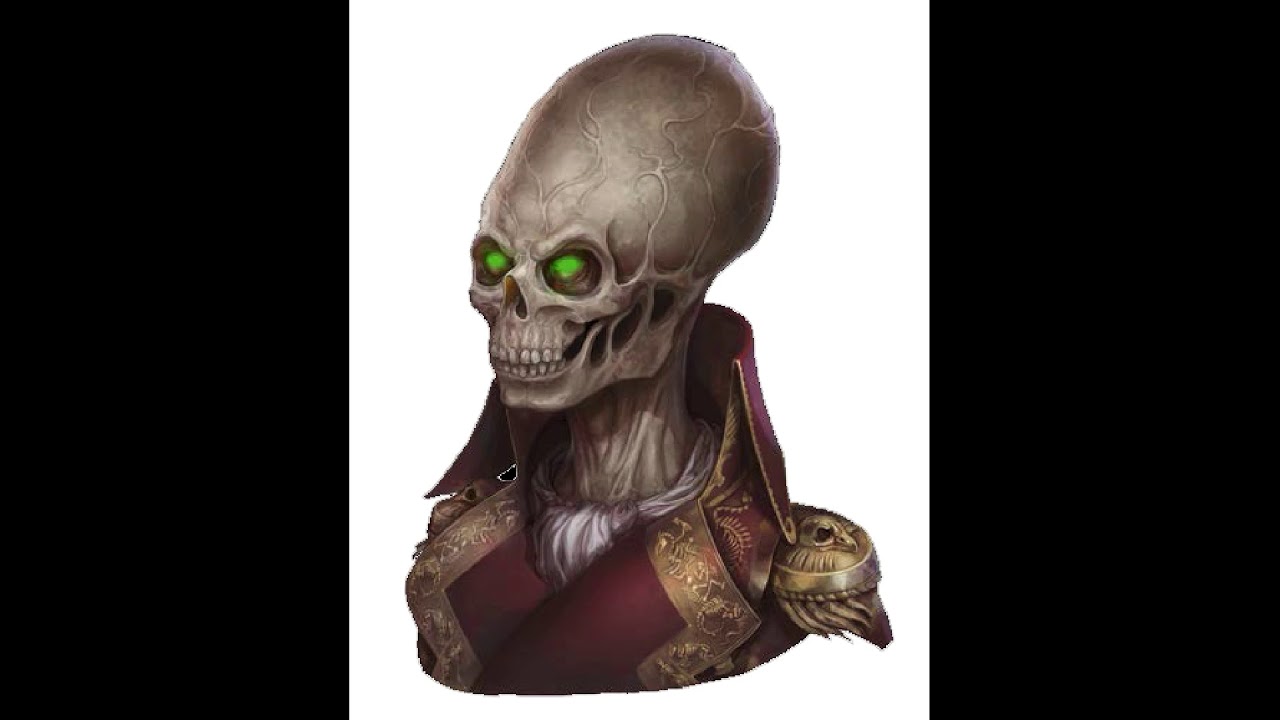 No, you didn't miss a level up. You were actually over-levelled for the Adventure Path, since you went through the Prologue adventure first. So I'm delaying the level-up until it would happen in the AP. Don't want to have to rethink/re-balance every single encounter in the Books.
Rule Number 12: "A soft answer turneth away wrath. Once wrath is looking the other way, shoot it in the head."
Top

Sounds good
"Well, guess we better get ready. Don't want to be late-late for this meeting. Man sounds important, and very very scary. I don't like undead, something not right about them. Dead should be dead-dead not dead-alive." He shrugs thinking of all the credits he will get and decides its worth the risk. So he cleans up and makes sure to join the others when its time.
"He that breaks a thing to find out what it is has left the path of wisdom." - Gandalf
J.R.R. Tolkien, Council of Elrond, The Fellowship of the Ring
Top

Jalesh takes some time to clean up and groom himself to make himself presentable for these royal types, much like Quig, Jalesh is not exactly favorable of the undead, much like the ratman Jalesh likes his dead to stay dead, after all most dead men meant payment and a hot meal for the large lizard and the undead always presented a problem. "I know what you mean Quig, i am not a fan either, but this might end up being a juicy payday." Ready Jalesh joins Quig in waiting for the Priest to get ready for the trip.
Top

DREAMS would be the first finish, not really having anything to 'clean up;. Bible under his arm, he stood in the hall where the Quig and Jalesh would meet up, giving a single hand wave, "Hello there, my allies. Let us go, the limit is the skies."

Sorry, just a quickie so MWD can move on!
Top

Unfortunately for the new Starfinders, meeting with the dead-alive is on the docket, rather than getting bounty pay for the dead-dead. The Eoxian embassy is exactly as DREAMS' intel detailed, the somber architecture feeling very appropriate for the undead. A pair of skeletal attendants greet you as you arrive, and show you to a well-appointed office, more spare than you would have anticipated, feeling like the inside of a mausoleum.

Nor rises from the seat behind a bone-white desk, raising a hand in greeting. He does not offer refreshments, either because no on here needs them and he forgot to offer, or he assumes you would not trust food and drink from his kind. "Thank you for agreeing to meet with me. I'm certain you're aware of the recent interest in the prospecting ship Acreon and the asteroid being referred to as the 'Drift Rock', and I believe you're also acquainted with the dispute between Astral Extractions and the Hardscrabble Collective over both the ship and the asteroid." The is a subtle sarcastic tone, suggesting you fully knows of your interest and activities regarding these recent events. "Both parties are currently awaiting legal arbitration, but the wheels of justice often turn quite slowly. As a result, I have offered my services as a mediator in hopes of finding a solution that is equitable to both factions."

"The first step in this, of course, is learning the specifics of the opposing claims. Reports of your recent endeavors in dealing with some of Absalom Station's most notorious gangs have led me to believe that you might be useful in this undertaking as well. You're new to the Station, you seem to possess a wide range of skills and abilities, and you certainly appear capable. In short, you're perfectly positioned as a neutral third party that could cut through all of the red tape surrounding this issue and get to the heart of the matter."

"Thus, I would like you to go to the Acreon, find out precisely what happened to its crew, and ascertain the value of its asteroid cargo, as well as determine whether this Drift Rock is truly as 'mysterious' as the media claims. I have received the clearance for a party of my choice to get past security and board the ship for the purposes of this inquest." He waits for a minute for you to process everything. "Are you interested in the job?"
Rule Number 12: "A soft answer turneth away wrath. Once wrath is looking the other way, shoot it in the head."
Top

Having waiting for more eloquent members of the group to answer Quig finally shouts, "Yup-yup!"

He starts to leave, as if that's all there is to it, then he smacks himself on the forehead before reaching the door and turns around. "What's the pay? How much salvage can we take-take?"

He's smiling from whisker to whisker ready to loot... er salvage and investigate the ship and asteroid.
"He that breaks a thing to find out what it is has left the path of wisdom." - Gandalf
J.R.R. Tolkien, Council of Elrond, The Fellowship of the Ring
Top
Post Reply
13 posts