Fortunate for Aurelia, whomever these people are they are an equal evil opportunity employer, so the approach of another guard who happens to be female neither surprises nor alarms the guard Mercutio has been conversing with. "Yeah, well I've searched most everything in this section, and this night is turning out to be boring as hell. I'm gonna go join the card game." He gestures to the multiple open boxes in this section. "If you want to keep digging to find a trinket or two, be my guest." He then heads off to the west to join some of the others.

Well, you are skilled people to be sure.

The Disguise/Bluff of Aurelia also easily beats the suspicion rolls of this low-level guard.

See the Roll20 Map for the update. The Guard that Mercutio was talking to has gone west, and is at a table with 2 others Guards (who are out of sight because of the boxes, but you can hear them gambling). You are alone in this section now. There are guards to the west, and a raised platform (with a half flight of stairs leading up) to the east. The eastern section is likely where a supervisor would sit, higher up so as to be able to, well, supervise. To the south are large closed double doors, which from the layout you would assume is the equivalent of a 'loading dock'.
Rule Number 12: "A soft answer turneth away wrath. Once wrath is looking the other way, shoot it in the head."
Top

Theodrix swoops in, cloak up over his head, voice low. "Good job, let's look around. I have a feeling this is just a front, we need to find the basement access." He will search the area furthest from the guard's poker game, letting the fax-guards search the area closer. He keeps his head down, and sneaks about to not give his location away until the last possible moment if he even has to. If he can he too tries to disguise himself as a guard, hiding his fancier weapons and armor under a cloak.
"He that breaks a thing to find out what it is has left the path of wisdom." - Gandalf
J.R.R. Tolkien, Council of Elrond, The Fellowship of the Ring
Top

Theodrix, Aurelia, and Mercutio (those disguised as guards) move to the east of the warehouse until they are stopped by the boxes. Above them on the elevated section they can hear voices speaking. Theodrix and Mercutio are both at least six feet tall, so using the boxes for a step up, they both are able to peek into the glass-windowed room.

The room isn't that big, maybe 15'x25'. A viewing window (which they are looking back through) overlooks the warehouse floor to the west. Two metal pipes ascend through the northwest and southwest corners of this room. An oak desk occupies the eastern side of the chamber, back by an intimidating chair. An open door to the south reveals an unused and empty storage closet, while the northern door exits to the flight of stairs.

The room is occupied with two of the guard-types you saw earlier, as well as someone clearly standing out. You can hear him telling some off-color and rather sadistic jokes, which the guards chuckle to nervously, and address him by perhaps a title? But what sane man calls himself 'Mr. Smiles III'? The man is pale and gaunt, painted with what looks like clown makeup. He is lightly armored, with what looks to be a shiny sickle laid out on his desk. 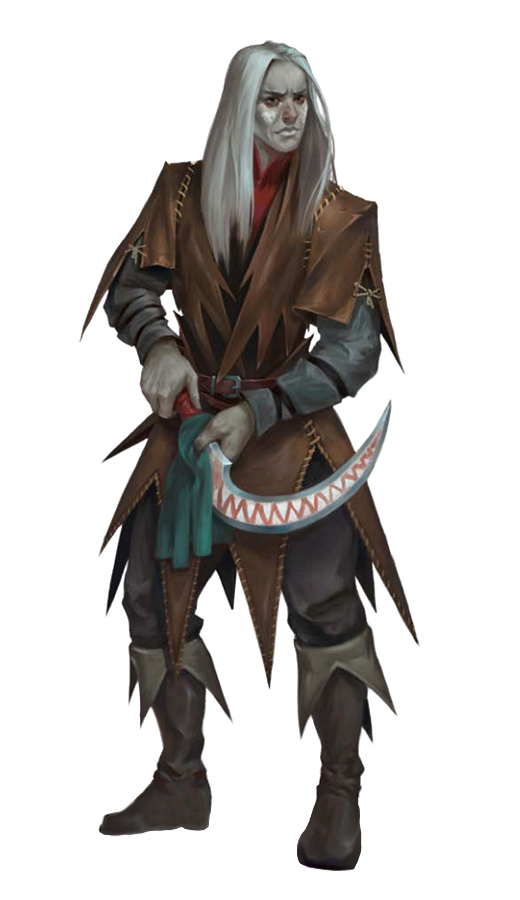 Theodrix can't seem to get a good angle, but Mercutio has a clear view of the room. He recognizes the boss man as a now just a pale human, but a Fetchling, one whose ancestry tied back to the Shadow Plane. The dashing dandy also has an unfairly broad education, one that just happens to include engineering as one of the topics. He can tell that the pipe on the southwest of the room is up to code, but the one to the northwest clearly wasn't. There's no way it could remain airtight with that bad of welding, and there is a faint cutout line the size of a man in it. This must be some sort of secret stairway disguised as just another pipe!

Bertram and Astraea move in as well, staying low behind the boxes searched by the bored guard who is now gambling. They leave behind Imistos and Dagio, with Malphene as their watcher.
Rule Number 12: "A soft answer turneth away wrath. Once wrath is looking the other way, shoot it in the head."
Top

Bertram crouches behind a box and half signals half whispers to the others - "What can you see?"
Top

Theodrix comes down, "We need to get in there. Some sicko guard boss is in there, and I have a feeling anything else we want is in there too." He glances around for the stairs leading to the door into the room. "Let's head up the stairs, kick in the door and murd...dispatch those inside. From there we should find whatever we are looking for." He rests his hands on his weapons, ready to draw them before heading up the stairs.
"He that breaks a thing to find out what it is has left the path of wisdom." - Gandalf
J.R.R. Tolkien, Council of Elrond, The Fellowship of the Ring
Top

"Now you're talking my language!" Astraea says, thumping a gauntleted hand against her chest.
Top

"Ok" Betram whispers. "Move in, we are right behind you!"
Top

Theodrix wipes his face with the back of his sleeve and a slightly wry grin appears on his face. "Follow me." He then pulls down the cowl on his hood to cover much of his face then draws his weapons. In his right hand is his locked and loaded crossbow Dignity's Barb, in the other is Feather Sliver the magical hand axe.

Slipping up the stairs as quickly and quietly as he can he checks someone is behind him, winks, and then kicks the door open and without another word fire his crossbow into the first foe he spots tosses the crossbow and quick draws his longsword.

Full on Batman Here
Sneak up to the door kick it in. Assuming Surprise Round (1 action)

TWF from here on out.
"He that breaks a thing to find out what it is has left the path of wisdom." - Gandalf
J.R.R. Tolkien, Council of Elrond, The Fellowship of the Ring
Top

Aurelia, not being very stealthy herself, waits for Theodrix to loudly KICK down the door and surprise the enemies, and then follows. After moving up the stairs as much as she can, she will summon a ball of exploding glitter onto the 3 guards sitting around a table. "Let's get this party started!"

Move up stairs. Cast Glitterdust on 3 guards around the table. DC16 will save negates
Top
Post Reply
65 posts